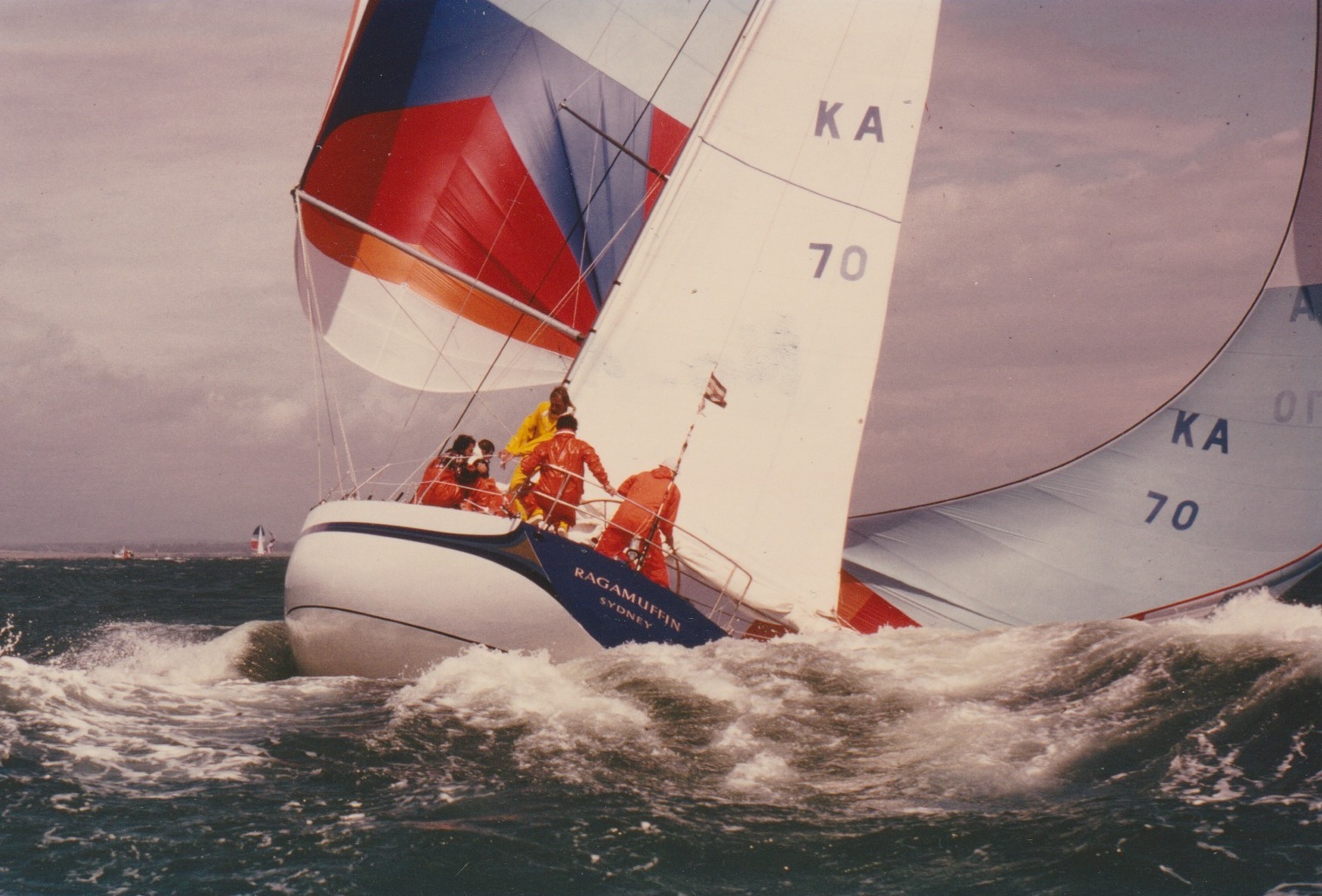 Ragamuffin with all guns blazing on the Solent during the Admiral’s Cup. Photo supplied.

“What a great idea!” That was the reaction of Australian Sailing president, Matt Allen, when first told about the planned regatta to celebrate the 50th anniversary of Australia’s first victory in the Admiral’s Cup. That positive response has now been widely echoed by the yachting community both here and overseas.

The CEO of the Royal Ocean Racing Club, Eddie Warden-Owen, has written to the regatta organisers from the UK saying, “What a great idea. It is events like this that remind us how important the Admiral’s Cup is to those who participated. I am sure there will be a lot of interest from outside Australia.”

That prediction looks certain to be fulfilled as three former cup crewmen have confirmed they will be flying back from their international bases to sail in the regatta on Sydney Harbour this December.

The roster of Admiral’s Cup team yachts and trialists that have already expressed their intention to take part is impressive. It is a roll-call of famous Australian offshore competitors, including Caprice of Huon, Camille, Mercedes III and IV, Fare Thee Well, Love & War, Mister Christian, Syonara, Too Impetuous, Sagacious V, Pacha, Black Magic, Spirit of Koomooloo (the original Ragamuffin), and the first Wild Oats.

In addition, Anitra V will race representing the legendary Halvorsen double-ender Freya from the first Admiral’s Cup team in 1965, and Lorita Maria has been invited to sail in recognition of the contribution Norman Rydge has made to Australia’s campaigns over the years.

Syd Fischer, who captained the Australian team in the Admiral’s Cup six times, is a co-patron of the anniversary regatta with Sir James Hardy and Gordon Ingate. Fischer remembers how the quality of our offshore yachts and sailors shocked the European and American teams. “We’d sailed against each other here to be selected, and that got pretty hot. Over there, they got a bit of a surprise at how good we were – and it came as a bit of a surprise to us, too!”

Chair of the regatta organizing committee, David Champtaloup, says he has been overwhelmed by the support from the Classic Yacht Association, the Australian National Maritime Museum and all the Sydney clubs. “It’s very heartening”, he said. “The event has clearly struck a chord with the yachting community. The SASC, CYCA, RSYS and RPAYC haven’t hesitated to provide their assistance with the staging of the regatta and the on-shore hospitality events. It is going to be a genuine multi-club celebration.”

The Admiral’s Cup Anniversary Regatta will be held on December 1, 2 and 3. The organisers are keen to hear from any yacht owners and Admiral’s Cup crew interested in taking part. They should contact: Peter Shipway at peter@barlowdistributors.com.au or, David Salter at davidelva@alpha.net.au