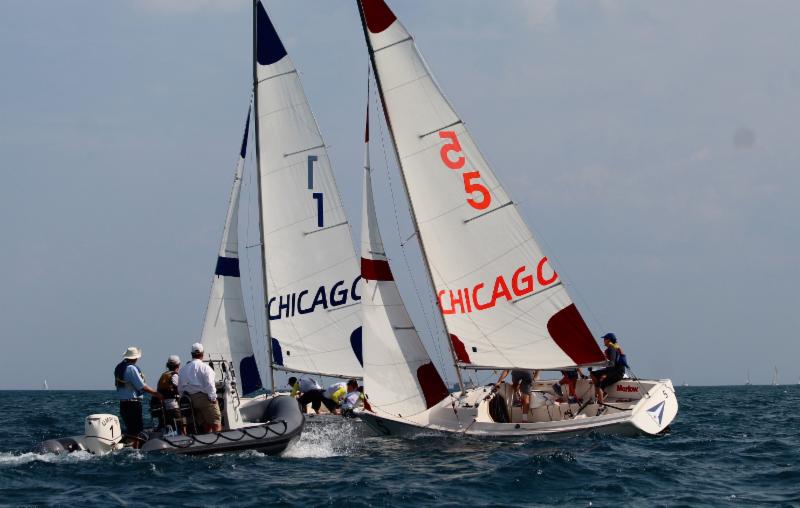 Chicago, IL — In a David-and-Goliath-style Finals series, Will Holz, who is ranked #406 in the world, took down the formidable, #6-ranked Australian Harry Price, and the Down Under Racing Team. Price and his crew, Murray Jones and Cameron Seagreen, were fast and sailed impressively well all weekend, but Holz had an edge in the light air and came out on top of the four-race Finals. Local match racing veteran Steve Lowery, sailing with Bridget Groble and Jon Noller, defeated the young gun Will Curtiss in the Petite Finals to take 3rd place; another strong finish Lowery can add to dozens of podium performances at CMRC over the years.

Will Holz's path to the Semi-Finals was not easy. After finishing the first-round robin in 2nd place, he was pitted against his older brother, Peter Holz, in the Quarter-Finals. The Holz-brother showdown was hard to watch so early in the event. Peter Holz's Windy City Match Racing Team, crewed by Michael Whitford and Meg Six, have been a strong force on the international match racing scene, so it was a tall order for the younger Will Holz. Nonetheless, Will Holz and his team rose to the occasion, and swept their Quarter's and Semi's undefeated.

Will Curtiss, joined by Wade Wagner and Cristophe Killian, was the comeback kid of the weekend. Curtiss, who's about to start his senior year at the College of Charleston, didn't win a single race in the Round Robin, but rallied and blazed through the Repechage and Quarter-Finals undefeated. Furthermore, Curtiss was chosen by the number one seeded skipper, Will Boulden, in the Quarter-Finals, which led to quite the upset when he dispensed of Boulden 2-0 and advanced to the Semi-Final's.

The Chicago Yacht Club's volunteer race management team delivered another high-quality, match race regatta. PRO Darcy Cook and DRO Dick Schweers led the team efficiently and with accuracy through a long weekend of races. The sailors, umpires and race management team had to persevere a typical Chicago weekend of hot temperatures and light winds, but the Chicago Air & Water Show added a lot of entertainment. Blue Angels and fighter jets zoomed overhead and brought hundreds of boaters out onto Lake Michigan for the spectacular show.

Many of the teams will continue to Bayview next weekend for the Detroit Cup, and then on to New York for the Oakcliff International for the next two stops on the US Grade 2 Grand Slam Series. The winner of the overall series will earn an invitation to the 2018 Congressional Cup. Chicago was delighted to play host to so many international teams, and wishes them the best of luck on the rest of the circuit.

The Chicago Grand Slam was included for the first time this year on the Match Race Super League, and looks forward to promoting mono-hull match racing on the international stages. Chicago Yacht Club is also grateful for the generous sponsorship of Gosling's Rum, the official rum supplier for the Chicago Grand Slam.