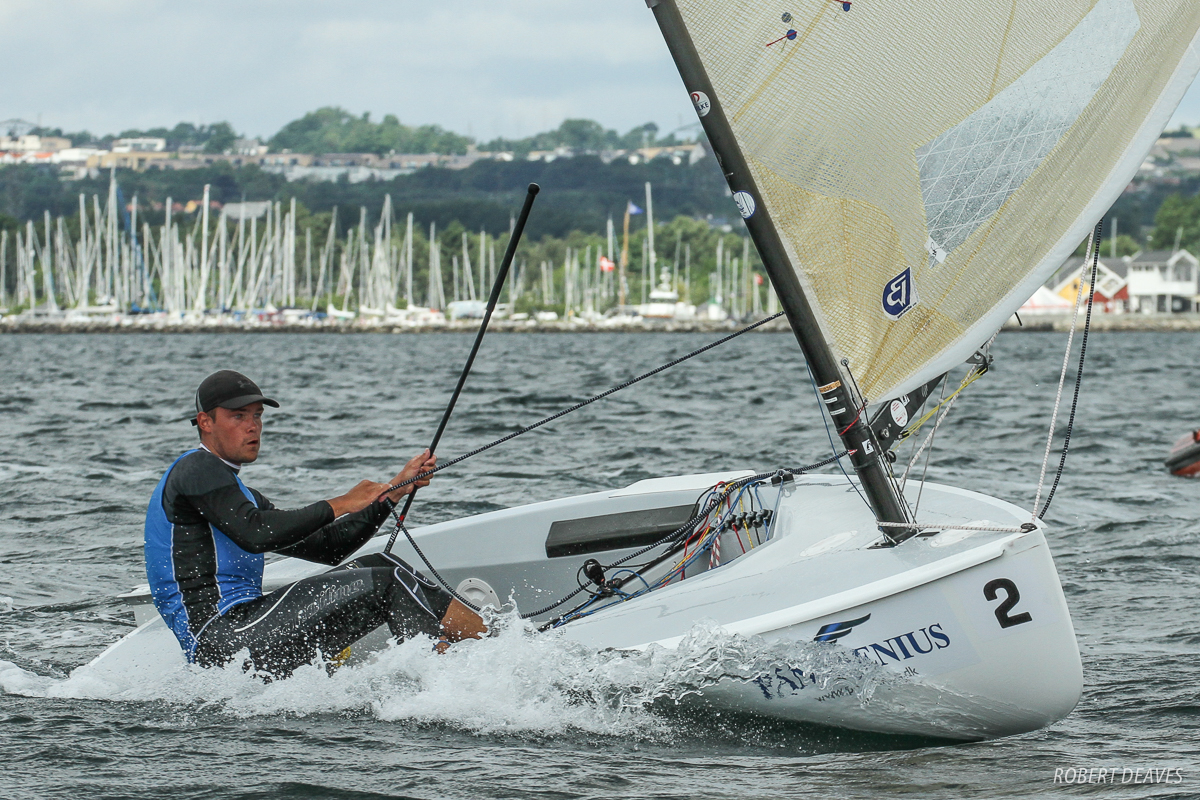 One of the largest Finn Silver Cups on record is about to begin on the largest lake in Central Europe. Nearly 50 young Finn sailors from 21 countries and four continents are gathering at Balatonfüred, a popular resort town on Lake Balaton’s northern shore.

The list of entrants could read like a who’s who for the 2020, or 2024 Olympic Games, including both those who have experienced Olympic competition, and those who are taking their first steps on the long, personal and physically challenging journey towards that quadrennial pinnacle.

The host club is the MVM Hungarian Power Companies Sport Club (Magyar Villamos Művek Sportegyesület- MVM SE). The sailing club of MVM SE has an idyllic location overlooking the race area with lawns and tree lined boat parks leading down to the water. The sailors are all being made to feel very welcome as the build up continues for the first races on Tuesday.

Within the impressive line-up, three sailors have won the title before and one has gone to the Olympics already. The defending champion is Phillip Kasüske from Germany. He hasn’t put as much time in the boat as he would have liked, having just returned from the Red Bull Youth America’s Cup, where he was the wing trimmer on SVB Team Germany.

“This year I'm trying to defend the title, but not having sailed the Finn as much as the others during the season it is going to be a very hard task.”

Last year in Aarhus, Kasüske took the title off Ondrej Teply, from the Czech Republic.

Teply is optimistic about his chances of a second title. “I am feeling good. I had a bit slower beginning of the season, but after some training in summer I am starting to feel better in the boat, so I hope I will be able to show it in the Silver cup. Balaton can be a light and tricky place, and with the number boats here it could be an interesting regatta. Anyway, my goals are to be around top three like for every junior worlds, and let’s see what happens.”

His strongest opposition could come from the new U23 European Champion, Henry Wetherell, from Britain. Wetherell won the title convincingly in May in Marseille while also placing sixth in the senior fleet.

Having only joined the Finn fleet last year he feels he is making good progress.

“I feel like I'm constantly progressing and making gains. At the last Silver Cup I had only sailed the boat for a couple of weeks, so compared to last year I am 100 times more comfortable with the boat, the setup and my fitness. I have a great group to train with so we are always pushing each other to improve.”

He says he was not too surprised at clinching his first Finn title earlier this year. “I had a great year training with the team and I literally felt as though I was going faster and faster each session. Over the past couple of events before the Europeans I had still been learning the boat. Obviously the format helped me jump up a few spots in the end but over the week I felt I was going well.”

He has set his goals high this week. “My goal for the event is to win. I know the venue is quite light and tricky and there are some really good light wind sailors in the fleet so it will be a tough event. But it's easier saying it than doing it so we will have to wait and see who is the best on the day.”

The third former champion present in Balatonfüred is Arkadiy Kistanov, from Russia, who won on home waters in 2011. This year will be his final attempt as he will be too old in 2018.

“It was pretty tricky for me to take part in the Silver Cups. Every year I expected something, but every year someone stronger came. I really think the level of top 10 sailors at the Silver Cup should be very high this year.”

“I have three competitions in one month, so I will try to get a good result but I’m not focused only on this aim. This last Silver Cup for me is something special. I want to have some nice, tricky races. I expect light winds and will push; the conditions are good for me and I cannot wait to start racing.”

There are lots of other stories to tell this week. Here are a few more:

Facundo Olezza is he only sailor here with Olympic experience. He placed third in last year’s Silver Cup, just before he went to Rio for the Olympics, where he placed ninth after winning two races.

One sailor who could surprise this week is Lars Johan Brodtkorb. He still splits his time between the Europe dinghy and Finn sailing and is too heavy for one and not really heavy enough for the other. A double Europe World Champion, a few weeks back he jumped straight into an OK Dinghy and won the European title after just four days in the boat. This should give him extra confidence as he approaches what could turn into a light wind decider later in the week.

Last year Jan Orel turned to Finn sailing to turn his life around. This year his younger brother Liam has also begun to sail the Finn. A top Slovenian Optimist sailor in his younger days, he later turned to the Laser and windsurfing, before ending up in the Finn. He’s only done a few months training so far so, but his brother rates him highly for such little time spent in the boat.

Another newcomer is Taavi Valter Taveter. His father Imre sailed two Olympics in the Finn and is in Balatonfüred this week coaching his son. Sailing since the age of six, he was successful in the Optimist class and won several Laser Radial national titles before turning to cross country skiing, for which, now at 190 cm and 97 kg, he feels he is too big. Then, “the old love (sailing) was in his heart, so he decided to start sailing Finn.” His first international Finn regatta was this year’s Kiel Week, where he finished 25th. Later we went to Warnemünder Week and he finished with good second place behind Jan Kurfeld, the 2007 Silver Cup winner.

Luke Muller, from the USA, is sailing in his second Finn Silver Cup. Last year he took part in the Europeans and was Caleb Paine’s training partner in Rio [Paine went on to twin the bronze medal], before focussing on school. He said he also gained a lot from training alongside Paine. “It was great because it was by first time using really good equipment. I was fast tracked onto Caleb's Olympic kit and that was very helpful to see what the boat should feel like. Training and doing practice races with the Olympic fleet was extremely motivating and forced to train at my very best.”

He feels the progress he had made so far has been positive. “I feel that I have made many strides working with Luther [Carpenter] as my coach. I am identifying opportunities on the race course much faster and my knowledge of sail trim is tenfold what it was last year. The only issues I am having now have been due to a lack of training volume, but focus on those weaknesses has helped mitigate them.”

He is very excited to be sailing the Silver Cup this year. “It is where the best youth Finn sailors come together to compete. My goal is to just sail with a clear head and practice the things I have been working on recently. I think there will be a few guys gunning for the win and I hope to be one of those, but we will see, as Balaton will present a unique challenge.”

The practice race takes place Monday afternoon. While the sailors who arrived early have been enjoying the fresh to strong winds over the past few days the breeze is forecast to fall away gradually over the coming week. Thirteen races are scheduled from Tuesday to Sunday to decide the 2017 U23 Finn World Champion.