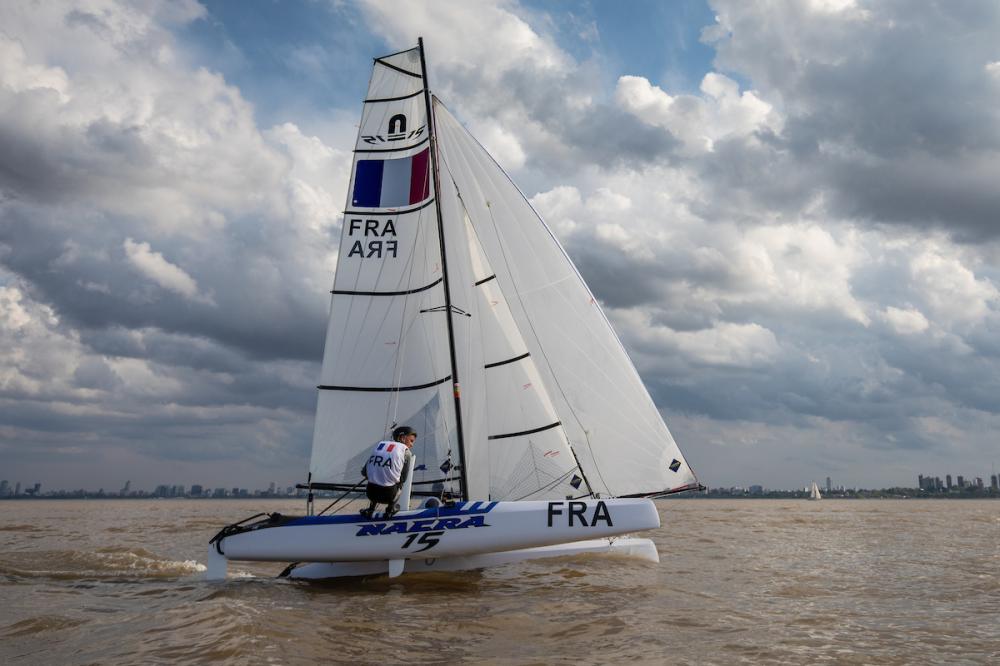 A frustrating day epitomised by light winds meant that Girl’s and Boy’s Windsurfing (Techno 293+) could also only sail one race each, while Girl’s and Boy’s Kiteboarding (IKA Twin Tip) were able to sail two heats each.

Racing began on time for all three events and initial wind conditions looked promising, but Kiteboarding was subsequently postponed, and the Nacra 15s’ second race was abandoned.

After initially returning to shore, the Techno 293+ and the Nacra 15s returned to the water for a second attempt, before Race 4 of the Boy’s Techno 293_ was abandoned. Racing was then called off for the day at approximately 16:30.

In the first ever Nacra 15 race at the Youth Olympic Games, the French team of Petard and Coutard managed the shifty conditions well to claim the first victory.

“After the first upwind we gained good speed, and used good tactics to finish first,” explained Coutard. “We will take it match by match, but we are really happy to represent France at this incredible event.”

Kiteboarding also made its Youth Olympic Games debut today, completing the first part of race one in opening series.

Two heats were raced in the Girl’s and the Boy’s fleets; the top three ranked athletes in each heat progress to a six-strong Heat Final A, while the other six are put through to Heat Final B. The finishing positions in Final A and B will decide the result for the first race of the week.

Paula Herrmann (DOM) and Christian Tio (PHI) both finished second in their heats and will be racing in the Girl’s and Boy’s Final A.

“I enjoyed the first day of the competition and I’m really happy to reach Final A because I had a really hard heat,” said Herrmann.

“It’s everyone’s dream to be here and my aim is to get a really good result,” added Tio.

The Girl’s and Boy’s Kiteboarders will follow heats-based system throughout the week, eventually determining which four athletes will progress to the final.

Nicolo Renna (ITA) claimed first in the single Boy’s race to leapfrog Haoze Chen (CHN) into second in the rankings after three races.

“It was a very good day to finish first in a very strong fleet; I hope for more wind tomorrow,” Renna commented.

Alexandros Kalpogiannakis (GRE) finished second to hold on to the overall lead.