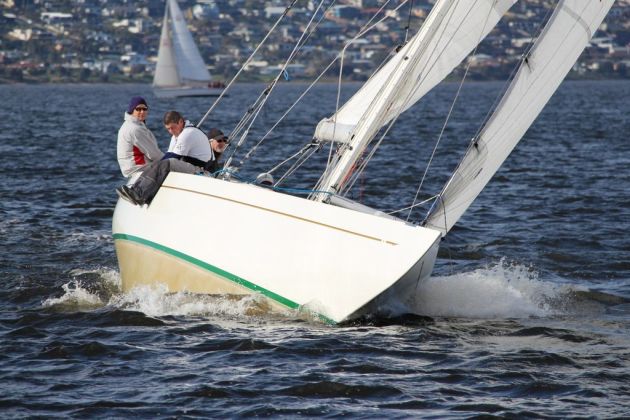 Being a yachting administrator doesn’t give Mike Denney much time for sailing his own boat, Wild West, which he owns in partnership with his wife Michelle, on the River Derwent. Today was an exception and, as it turned out, one for celebrations.

Mike, sailing manager with the Derwent Sailing Squadron, has been sailing in Bellerive Yacht Club’s Winter Series and today he steered Wild West to her first race win since he and Michelle bought the Bakewell-White 39 about 12 months ago.

The New Zealand-designed Wild West took line honours and first place on corrected time in Division 1 of the BYC/Tilford Auto Group Winter Series on what was beautiful day for a mid-winter race.

“We got a reasonably good start and led for most of the way, although they almost caught us at one point when we sailed into a ‘hole’,” Mike said after the race.

Wild West maintained her lead to take line honours from Nexedge, skippered by Tim Gadsby for the syndicate of new owners. On corrected time Wild West won from Magellan (Richard Grant) and Nexedge.

Wild West has an offshore program for the summer, starting with the Maria Island Race in November and then the 10th Launceston to Hobart Race starting on December 27, with Mike taking time off from his sailing management duties.

Hard luck story of the day was Philosopher (Shaun Tiedemann) which sailed through the start/finish line on the first downwind leg for Division 1, thus incurring a two minutes penalty on her elapsed time under SI 11.5. She placed fifth.

With one race to sail in the BYC Winter Series, Tas Paints (Ian Stewart) has a one point overall lead in Division 1 from B&G Advantage (Jeff Cordell), both boats being unplaced today. Wild West has moved up to third overall.

Sailing conditions were tricky today, with plenty of fresh water flowing out of the Derwent and the breeze fluctuating between NNE and NNW at 10-15 knots.

“The frequently oscillating breeze, combined with a brisk outgoing current made for plenty of ‘nip and tuck’ racing,” BYC sailing manager Peter Watson described the race. “Boats that did not keel in phase with the changing wind direction and current found themselves quickly losing places.”

Saga heads the leaderboard in Division 2, on 14.5 points, with Southern Swordfish and Trouble (Dave Willans) both on 17 points.

With one race to sail in BYC’s Winter Series, Velsheda shares top place on the pointscore with Innovator (Ian Smith) which finished fourth today. Kama is one point behind.