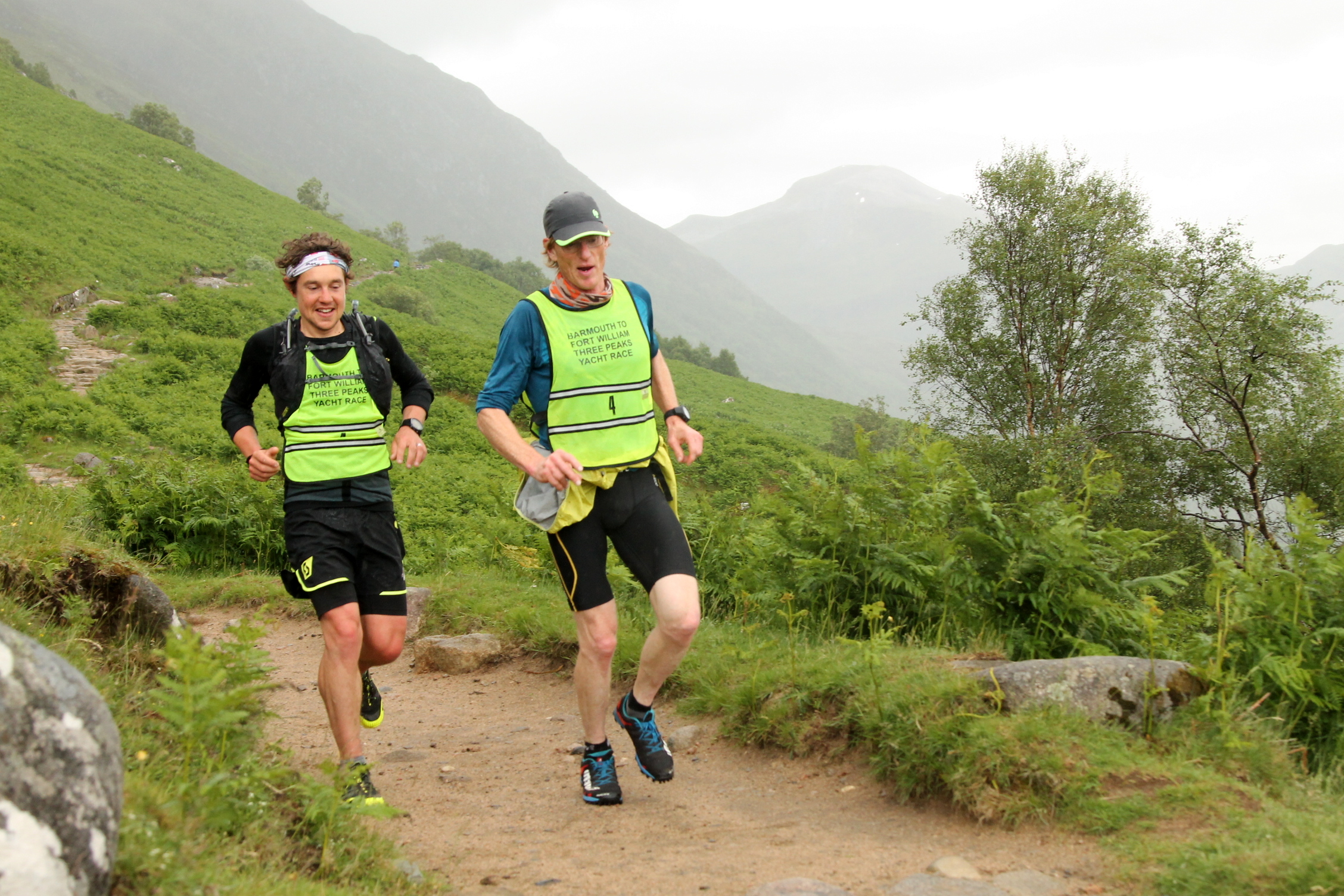 The annual Barmouth to Fort William 3 Peaks Yacht Race is always a great test of endurance, in both sailing and running, and this year the weather conditions for the race pushed teams to the limits to cope with the extremes of British offshore and mountain weather.

The first three days of the race were slow racing in what were often flat calm conditions. Teams had to row their yachts to achieve marginal gains and have the patience and determination to keep working hard day and night while seeing only slow progress.

Runners on the first peak, a 26 mile run to the summit of Snowdon, suffered from sunburn and dehydration, and for the first time in the history of the race none of the race yachts chose the direct route through the Menai Strait, preferring to go around Anglesey and look for some wind in the Irish Sea.

After the second stage of the race (involving 38 miles of cycling and the ascent of Scafell Pike) it was a close race with Irish boat ‘Digital Built Consultants’ (Beneteau First 34.7) leading just ahead of the Jeanneau 40 ‘Wild Spirit’, though on handicap it was the 33 foot Sigma ‘Baloo’ ahead.

The third stage from Whitehaven to Fort William is the longest sail of the race, rounding the Mulls of Galloway and Kintyre and passing through the tidal gates and variable winds of the Inner Hebrides. After days of calm those winds were about to gust to nearly 40 knots as Storm Hector shattered the stable weather pattern apart, and condition turned from no wind at all to storms.

Wild Spirit and Digital Built Consultants broke away, racing to get into Fort William before the worst weather hit, and the storm conditions lost Baloo their chance of an overall win on handicap. They did however win one of the most prestigious cups, the Tilman Cup for all round performance, by putting 4 of the team of 5 onto a summit.

The two lead boats raced neck and neck, day and night to get an advantage for their runners on the final peak, Ben Nevis. Passing the Corran Narrows into the steep sided northern Loch Linnhe on the final approach to the finish they were still only a couple of metres apart after 4 days of racing, with Digital Built Consultants flying their spinnaker in 30 knot winds.

Wild Spirit crossed the line first by a few minutes with their runners primed to leap ashore and run up to the snow covered summit of Ben Nevis, only to be told the race had to be put on hold for safety reasons until the storm eased. There were 100km/hour winds on the summit and in the coming hours snowfall and subzero temperatures.

In the 40 year history of the race it is only the second time Ben Nevis has been closed to runners – the last time was in 1978 due to heavy snow.

The deflated runners had to wait until the next day to complete a shortened run part way up Ben Nevis to complete the race and Wild Spirit, skippered by Paul Jackson, scooped most of the trophies as first over the line and winners on handicap in a corrected race time of 4 days 2 hours and 13 minutes, just 21 minutes ahead of Digital Built Consultants.

The runners from Wild Spirit, Stuart Walker and Jon Morgan, also won all 3 mountain runs and took the ‘King of the Mountains’ title with a combined run time of 13 hours 27 minutes.

In another first this year the race trialled a new ‘Challenge’ class which allowed non-competitive entries some engine use to complete the iconic race route.

The first ever Challenge finishers were company team ‘Smithers Purslow’ who are raising money for several charities. They walked to all of the summits and used their engine when needed.

Skipper Steve Fraser said, “We know we can’t ever compete with the race teams, but to be able to come and complete the course as a challenge was fantastic for us. “It took some determined team work and we’re delighted to be first ever Challenge finishers.”

After this year’s successful trial the Challenge Class will be incorporated into the event from now on and open to schools, universities, companies and clubs.

The race this year was sponsored by Exposure Lights and Bruichladdich Whisky and supported by Gwynedd Events and Barmouth Town Council.

Next year’s race will start on June 15th from Barmouth. You can find out more at: www.threepeaksyachtrace.co.uk