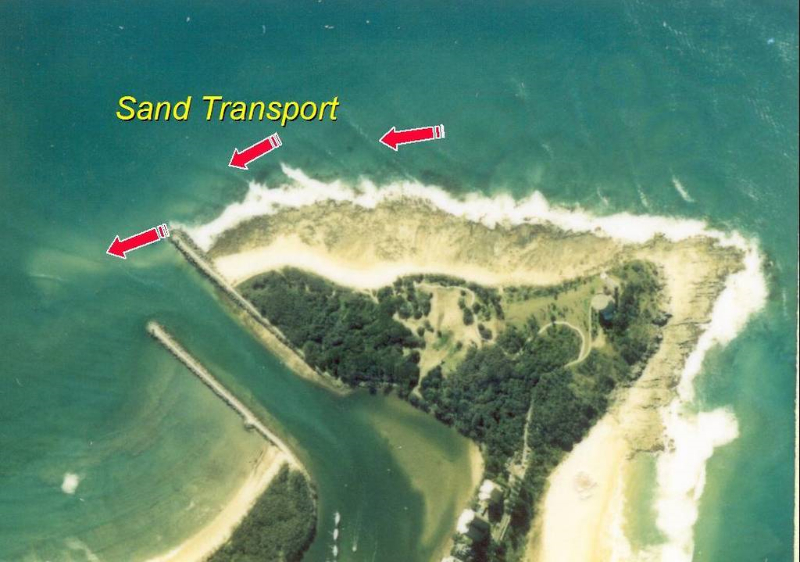 Maritime Safety Queensland issues a regular newsletter which often contains good articles that are of interest to the sailing community. Here's one from their latest about coping with silting at the entrance to the Mooloolah River at Mooloolaba, north of Brisbane.

If only we had a dollar for every time someone has raised with us a well-meaning “simple” solution to sediment build-up at the mouths of our rivers and creeks.

Sadly, the remedies are often not as simple or obvious as they might seem – and they are very seldom cheap!

A leading case in point is the Mooloolah River. Maintaining a navigable entrance to the sea here is crucial for the local commercial fishing fleet, marine tourism industry operators, a large number of recreational boaties and even the pilot vessel servicing ships going into and out of the port of Brisbane. In terms of the economic benefits riding on its navigability, the mouth of the Mooloolah River is one of Queensland’s most valuable patches of water outside of the trading ports.

So when nature bowls us a googly – as it has recently – and deposits large amounts of sand in the entrance to compromise its navigability, our worry beads get a real working over.

Dredging is, of course, one way to remove the problem. But dredging is expensive and not always effective even in the short term.  We need to be confident it will be the best solution and that, if we do it, we do it well.

So before we “jump in” we need to establish the extent of shoaling, how it is distributed, where it is coming from and what forces of nature are causing it. That means undertaking a program of hydrographic surveys to establish a clear picture of the seabed and its changes, and then an evaluation of all remedial options.

The harbour to the south-west of the Mooloolah River mouth was created in the 1960s, along with the entrance training walls pointing north-west into the southern Coral Sea.  Under most conditions, littoral drift moves sand north along the eastern face of Point Cartwright and then further north towards Alexandra Headland without affecting the harbour entrance.

Most of the fifty years since the harbour was created have presented no problems. But on a few occasions, when the area has been subjected to sustained easterly or north-easterly weather, sand has tended to move along the northern face of Point Cartwright and around the eastern river training wall, affecting the harbour entrance.

In 2009, following a few short-term episodes of shoaling, the Sunshine Coast Regional Council installed a permanent pipeline to transport sand from the river mouth to the beach so that the shoaling could be used to replenish the beach.  That was a win-win for mariners and beachgoers!

But this technique was insufficient to cope with the most significant shoaling event, between April 2011 and February 2013, when Transport and Main Roads (TMR) removed about 100,000 cubic metres of material to help the local fleet access the harbour safely.  Along the way we learned a lot about what type of dredging equipment was most effective while we also explored other options for managing sand accumulation.

Our dredging contractor designed and installed a submerged and permanent cross-channel pipeline. This enables a cutter suction dredge, which we’ve found to be an effective means of dredging within the confines of this location, to operate without its floating dredge hose significantly interrupting boat traffic.

We also commissioned a coastal process engineering investigation to evaluate the effectiveness of extending the eastern training wall and creating a sand trap updrift of the eastern breakwater.  While we aren’t yet convinced this is the most cost-effective way to maintain navigability at the river mouth it remains an option for further investigation if the recent trend of more frequent shoaling continues.

Fast-forward to the present time, and the river mouth has once more been subjected to a sustained period of shoaling. Here we go again!

Our hydrographic surveyors have conducted 25 surveys of the river mouth since last July to ascertain and monitor the condition of the entrance and, since June last year, there has been a dredge on site most of the time removing the shoals whenever conditions permit.

While we could all do without the intermittent shoaling problems presented at the Mooloolah River, mariners can rest assured that TMR will do its utmost, through prudent dredging and promulgation of maps and Notice to Mariners, to ensure they can continue to safely access the harbour.

Shoals may challenge us, but they won’t defeat us!