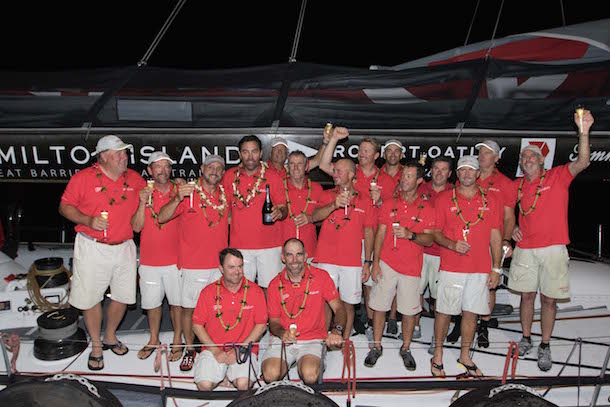 She came like a ghost ship out of the night.

The first hint of her approach was the sighting of the green starboard navigation light, then, minutes later, her black carbon fibre sails were barely illuminated by the loom of the lighthouse on Honolulu’s Diamond Head.

There was then no denying though that this dimly lit profile was the supermaxi Wild Oats XI; and she finishing the 2225 nautical mile Transpac Race from Los Angeles in impressive fashion – the second yacht of 60 to complete the course, and the fastest to do so.

Even less visible at that time, little more than 200 metres back in Wild Oats XI’s wake, was the J/44 class yacht, Patriot (Paul Stemler, USA). Over the preceding 100 nautical miles of the classic race the 100ft long Wild Oats XI, at times sailing at up to three times Patriot’s speed, had reeled her in. The big boat had come from way beyond the horizon and claimed the 44-footer only a handful of boat lengths from the line. The margin in Wild Oats XI’s favour was just 1 minute 32 seconds.

The reason for this close finish between two very different sized yachts was the staggered start system that applies to this race. Wild Oats XI, and all other big boats, had set out from Los Angeles five days after the likes of Patriot. Also included in that group of early starters was the Santa Cruz 37, Celerity (Harry Zanville, USA), which was first to finish: she reached Diamond Head less than 12 hours before Wild Oats XI.

“What a machine; what a ride; what a crew,” shouted an elated Roy P. Disney as Wild Oats XI docked inside Honolulu’s harbour to the cheering and clapping of an adoring crowd of family and supporters. Disney, who lives in Los Angeles, has 21 Transpacs to his credit. He entered the yacht in this year’s race in conjunction with the Australian owner, Bob Oatley, AO.

A proud and extremely happy Bob Oatley was on the dock to welcome the team. As much as the 87-year-old wanted to be part of the race, his health prevented him from doing so. Being on the dock to salute the success was the next best thing.

As soon as Wild Oats XI was secure, skipper Mark Richards leapt ashore and embraced Oatley, and his son, Sandy, who manages the yacht’s racing program. Richards then led the crowd and crew in three rousing cheers for Bob and Roy P.

Richards praised his highly experienced crew of eight Australians, six Americans and two New Zealanders, saying it was one of the best teams he had ever sailed with, despite of them approaching 60 years of age.

Regular Australian crewman, Steve “Mothy” Jarvin, put the aspect of an aging crew into perspective when he and two others were working hard on the foredeck, manhandling one of the largest sails: “I reminded them that the reason we were finding it tough was that that our total ages added up to more than 150 years.”

Once the crew was ashore and at Waikiki Yacht Club it became apparent that there was one talent the majority had retained over the years, despite their age; their ability to party post-race. Many were still celebrating well into the early hours of today.