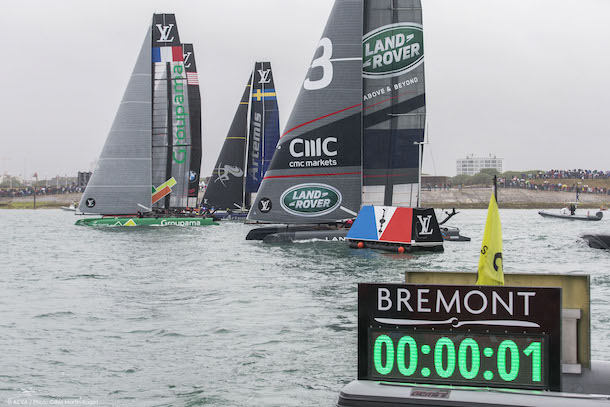 Racing for the 35th America’s Cup is set to begin.

Saturday marks the start of the race to Bermuda, as the Louis Vuitton America’s Cup World Series gets underway in Portsmouth. Six teams will begin to accumulate points toward the ultimate goal – winning the America’s Cup in Bermuda in 2017.

“Everyone is going to have their ‘race-face’ on,” said Emirates Team New Zealand skipper Glenn Ashby. “It’s going to be game on. The forecast is quite good so the speeds will be much higher and the action much greater than what we had today for the practice racing.”

“We made a good sail choice for the conditions today,” Ainslie said. But the skipper of Land Rover BAR was also firmly looking forward to getting his campaign for the Cup underway.

“It’s so exciting to be getting into racing that counts towards the America’s Cup. We have this Louis Vuitton America’s Cup World Series over the next two years, we’re thrilled to be starting out in Portsmouth and we can’t wait to get out of the starting blocks.”