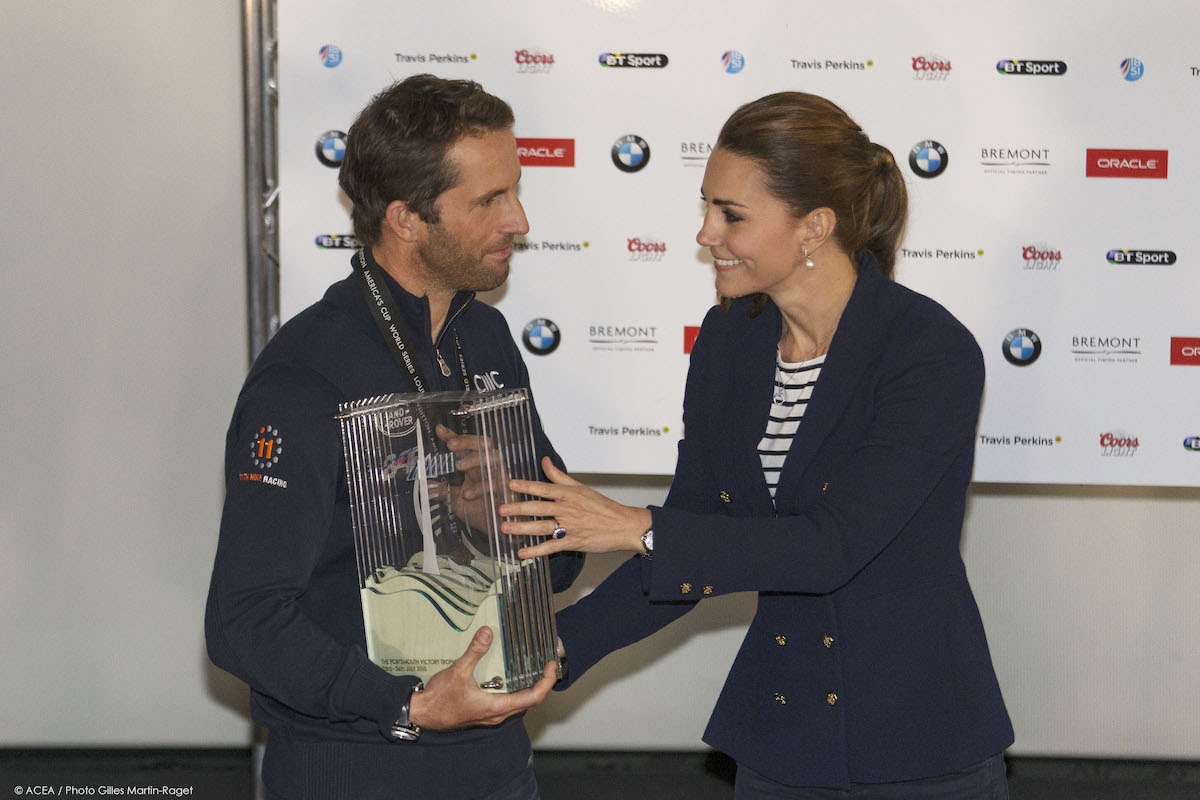 Extreme winds forced the cancellation of racing at the Louis Vuitton America’s Cup World Series in Portsmouth on Sunday, but didn’t dampen enthusiasm for a Royal visit from the Duke and Duchess of Cambridge.

With no racing to close out the weekend, the results from Saturday stand, meaning Land Rover BAR is the winner of the first event of the 35th America’s Cup cycle.

Ainslie and his team were congratulated on their win at the official prize giving by the Duke and Duchess of Cambridge, who were on site all day on Sunday and met with all of the teams, presenting the awards for the regatta. Michael Burke, the CEO of Louis Vuitton, was on hand to present each of the skippers with a gift.

“With the conditions that we saw yesterday and the standard these teams are sailing at, it’s absolutely amazing racing and looks wonderful on TV. In my sailing career, I’ve never seen anything like it – the amount of people who came out on the water, on the shoreline, supporting the event, supporting us as the home team…

“It’s a real shame we couldn’t race today considering all the effort that’s gone into the event and the support we’ve had from the local fans here in Portsmouth. But that is the weather and we can’t control it.”

“For a 24 year old, what a great opportunity for him to come through as a young guy. His skill level is really, really, high. This fast-paced, quick action, quick decision making really suits him,” said his skipper, Glenn Ashby.

Speaking about the decision to call off racing, Burling said, “Its just part of our sport, you can’t control the weather- officials deemed it unsafe so we cant go racing. Obviously a little disappointed not to be able to go out and give it another crack to take the overall win but really happy to have come in second in this first America’s Cup event.”

The second placed result was by no means beyond the ability of the new Emirates Team New Zealand crew, but not necessarily expected given the amount of time the team has had actually had on the water.

“We are absolutely wrapped with our second position,” said skipper Glenn Ashby. “There are a lot of other teams out there that have been doing a lot more sailing than we have in the last 18 months. So for our 10th day of sailing effectively to be able to come away with a second place out of the fleet we are very pleased.”

“In saying that, we have a huge amount to work on going forward once we get back to NZ. We have massive room for improvement in so many areas.”

“This event in Portsmouth has been a really solid platform to spring from for the next few years. Sailing with the young guys has been fantastic, the mix of experience and youth has proved to be a great recipe for success for the the future.” Ashby concluded.

Most of the team now return to New Zealand, while Burling and Tuke head for Rio for the 49er Olympic test event where they will look to continue their unbeaten run in the class to 19 straight wins.

ORACLE TEAM USA rounded out the podium in third place.

“The racing was great. We had some good sailing out there. Lots of lead changes, six competitive teams, the level is really, really high,” said skipper Jimmy Spithill. “We’re disappointed we couldn’t get out there again today.”

Fourth place belongs to Groupama Team France whose skipper, Franck Cammas, was philosophical about not being able to race.

“The sailing world depends on wind. Too much, not enough, there is no race. It’s normal for us as sailors. Today was clearly too windy to race without a big risk. It was the right decision,” Cammas said.

“But I’m happy about what happened here. There were so many people watching and it was well organized for the first event on the circuit. I’m very confident for the future as we look ahead.

“It was great to be able to race against the others,” Cammas continued. “At home, we train alone and when you sail alone you are always the world champion! So we found the level here is very high. Not a surprise, but good to see, and very motivating for us to improve.”

Dean Barker’s new SoftBank Team Japan squad finished on equal points with the French, but fell to fifth place in the tie-breaker.

“We wanted to get into it again today, but it would have been impossible to race in these conditions,” Barker said.   “The foiling AC45 race boats are great. But for us, we know we have a lot of work to do. This is just the first step in a long two-year program. Gothenburg next month will be a great opportunity to get back out there and get into the racing. That will have different challenges in terms of the race course, so more to adapt to there as well. We’re excited we get to race again in a month’s time.”

The Louis Vuitton America’s Cup World Series in Gothenburg from August 28-30 is the home event for Artemis Racing. The Swedish challenger will be looking to improve on a last place finish here in Portsmouth.

“We’re excited to get there and see the support for Artemis Racing. We’ve had great enthusiasm for the team at home in Sweden over the last couple of years and we’re really looking forward to racing there,” said skipper Nathan Outteridge.