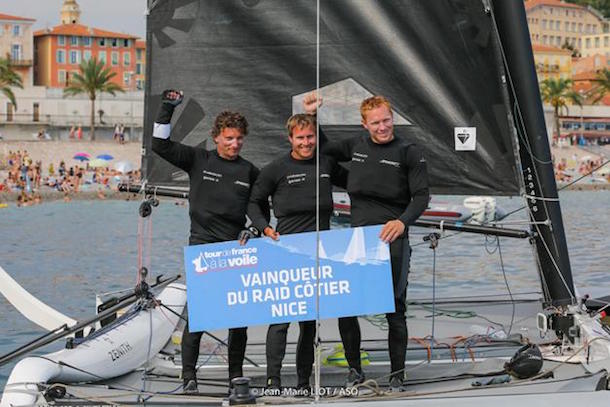 Spindrift wins last Coastal Race in Nice to come up the rankings in first tied in points with Groupama!

The leaderboard top 5 has been totally shaken up today after the last coastal race that took the fleet on a 20 mile long course in the Bay of Angels in Nice. The wind did not exceed 6 knots all day and got even lighter at the finish. Groupama and CombiWest who have been fighting for first place for the last three weeks are now threatened by Spindrift who won Act 9 coastal race and took advantage of his rivals average performance to top the leaderboard tied in points with Groupama and only three points from third place CombiWest.

“What a great day,” said Spindrift co-skipper François Morvan. “It's always nice when you're in the lead. We did everything as we should on our side, while the others tried to mark each other. We had nothing to lose. It's great. Nothing is over until it's over.”

The wind was not as consistent as forecast. The seabreeze conflicted with a thunderstorm inland that left the fleet with very light wind on the second part of the course, with lots of lulls. It was a long and nerve wrecking race for the 28 teams, and those who didn't take a good start would struggle to come back in the game. That was the case of Groupama and CombiWest. “The line was more favourable on the left hand side and according to our weather forecast and from the previous experience we had on this race course with a south-westerly wind, it would be more favourable to the right, toward Nice airport,” explained Groupama helmsman Pierre Pennec. “Spindrift went on the best side and sailed a very nice race, while we had trouble passing boats. We were hoping the wind to fluctuate so we could move back up the fleet, but it didn't happen. It's not the ideal scenario for us, but two points ahead, two points behind or tied in points do not change anything really.”

But it changes the leaderboard a lot. Apart from Groupama now tied in points with Spindrift in the lead, the next six boats are not in the same position as they were yesterday. CombiWest is third tonight, only three points from the two leaders. They managed to save the day, despite a very bad start. “We rounded the first mark in 28th position. Why? Because we wanted to be careful and stay with Groupama,” explained skipper Fred Guilmin. “We thought the seabreeze would kick in from offshore and in the end it came from the left. We tried another tactic and found our way up to round the aiport mark in 10th, and finish 9th. I don't know if it's a good or a bad day. Maybe a bit of both.”

Also to note the fantastic performance of Radio Vinci Autoroute who finished 2nd, their best result so far, and Prince de Bretagne, who finished 3rd and made his way up the leaderboard to 6th position tonight before end of play tomorrow. “We passed a lot of boats around the course. We did not make many mistakes and managed to keep our head clear. It's wonderful for us to proof that we have the potential to score good results,” said Radio Vinci Autoroutes skipper Jean-Baptiste Gellée.