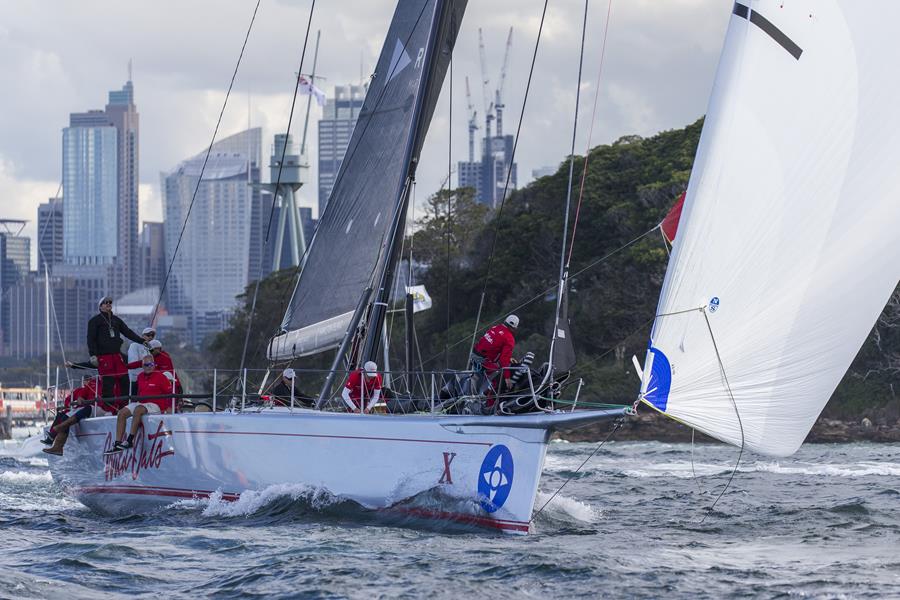 Wild Oats X’s official finish time for the 384-nautical-mile season-opener was 10:28:27 pm, giving them an elapsed time of 1 day 9 hours 28 minutes 27 seconds, and a hattrick of line-honours wins. The other victories were recorded in 2005 and 2009, plus this champion team has beaten the Gold Coast Race fleet to the Main Beach finish line six times with the 100-footer, Wild Oats XI.

Dockside at the Cruising Yacht Club of Australia’s finish partner, Southport Yacht Club, Richards said: “It was a great race, you couldn’t have asked for better conditions and against a fantastic fleet – very competitive. It was great to sail the 66 again. It’s a beautiful boat…it’s 15 years old now. It’s given a lot of people a lot of joy.”

Wild Oats X led the fleet out of Sydney Harbour following the 1pm start on Saturday, and from there navigator Adrienne Cahalan and the brains trust of one of Australia’s most experienced offshore teams, including recent Etchells world champion Iain Murray, worked around the clock to maintain their often-slim advantage in the shifting southerly winds.

“It was tricky for us; we kept headbutting cloudbanks then we’d slow down and the guys would compress back up to us again,” Richards elaborated, adding “that got rid of our chance at a handicap result. There were quite a few close calls with whales – we missed one by around three feet passing Byron Bay. They were everywhere!

“Line honours is a fantastic way to celebrate my birthday. I’ve got 35 minutes before midnight so I’ve got time to enjoy a couple of beers with the crew,” said the grinning skipper.

Second over the line less than an hour later was race sponsor Sean Langman and Naval Group, an RP65, and third David Griffith and Rupert Henry’s Chinese Whisper, a JV62 also from Sydney.

By 7am on Monday, 16 boats in the now 74-boat fleet had completed the course and the focus moved to the prized corrected time win.

The Noakes Sydney Gold Coast Yacht Race, run by the Cruising Yacht Club of Australia, is a vital lead-up race to the Rolex Sydney Hobart.

Contrary to the pre-forecast for light winds, the Noakes Sydney Gold Coast Yacht Race fleet is making excellent time up the NSW coast.

Shifting southerly winds overnight kept crews busy, skipper of the current IRC front-runner Envy Scooters, Barry Cuneo, reporting very little sleep since the start on Sydney Harbour at 1pm Saturday, as the Queensland TP52 battles to stay ahead of the strong 52 pack on IRC handicap. “We are amazed but very happy to be right amongst the 60 footers and well in front of the TP52 fleet,” the Royal Queensland Yacht Squadron’s latest Commodore said.

Sailing master on David Gotze’s RP63 No Limit, Dave Allen, says the crew of 17 are in a rhythm of three watches of 3hrs on, 3hrs on standby and 3hrs off. The Sydney boat is currently running second, a few miles behind Wild Oats and in 17kts of southerly pressure when Allen shared an update: “Oats is dead ahead. Barney (Ian Walker) reckons we are running them down. We got within half a mile last night, we gave them a tickle.”

Running northwards last evening, No Limit enjoyed the company of dolphins lit up by phosphorescence.

Race sponsor Sean Langman, the head of Noakes Group, and his RP65 Naval Group lost some ground when they missed a shift at 0300hrs this morning, though navigator Josh Alexander reports “morale remains high as we charge along to catch up”.

While the 60-footers and the TPs chew threw the miles remaining between them and the Gold Coast’s Main Beach finish line, the smaller and heavier boats that don’t plane in running and reaching breezes are settled in for a very pleasant day two.

Onboard Phillip Neil’s beautiful Hoek 78 Oroton Drumfire, named after a long-distance race horse, crewman Lachie Paramour shared some humour from first night at sea: “We started by watching the All Blacks vs Springboks rugby on satellite TV (of course) before a lamb ragu dinner. The on-watch did a good job of keeping the boat rumbling and picking up a few places before the half-time change over. We had a small wave splash over the bow about two hours ago and the crew are highly concerned that this may happen again, and that we may run the risk of someone getting their feet wet.”

Supernova has been forced to retire, succumbing to a broken rudder bearing at lunchtime on Sunday. All on board are OK, headed for Port Macquarie.