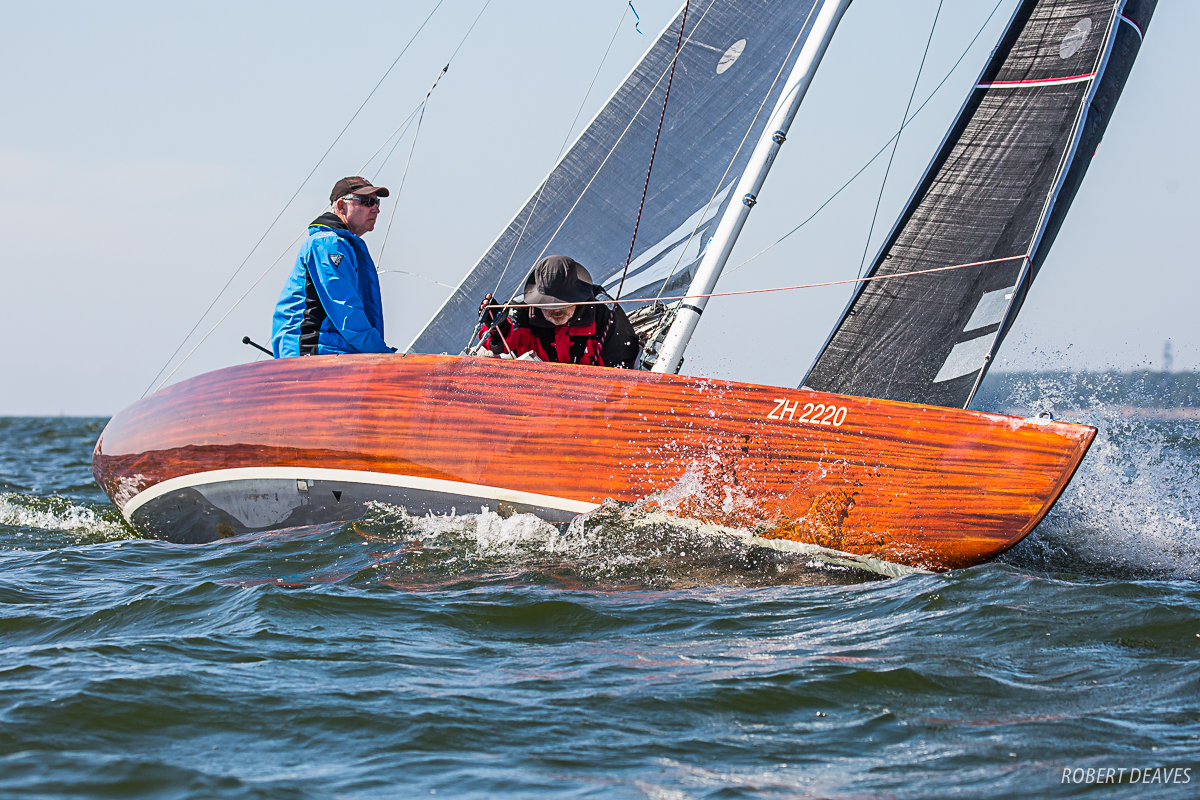 Australia’s Ku-ring-gai (John Bacon, Terry Wetton, James Mayjor) has won the Hankø Evolution Cup and Tara (Roope Juhonen, Janne Heikkilä, Pekka Honkavaara, FIN) the Royal Kaag Classic Cup after all racing was abandoned at the 5.5 Metre Championship on Saturday, due to no wind in Helsinki, Finland.

After three days of fabulous conditions, Saturday’s forecast was always the least optimistic, and an early decision was taken to abandon the final day, as temperatures again hitting the high 20s. This allowed the teams to begin preparations early for next week’s world championship, which is also being hosted by the Nyländska Jaktklubben (NYK)

Janne Heikkilä, who took the helm of Tara this week said, “The boat is new for us. We just got it this year and we haven’t had much time to practice. We practiced in Lahti where we live and we came here to have some more practice in the Royal Kaag Cup.

“We were improving all the time getting better and better, to know the boat and the ropes. In the end everything went just fine and we are very happy to be the winner of the Cup. We really learned a lot during this week. The week was nice.”

For Tara, it is something of a homecoming. A Britton Chance Jr. design, she was the last wooden 5.5 Metre built by Vator, in Helsinki, in 1968 for Britton Chance Sr.

Heikkilä continued, “This is my first time in 5.5 Metres. I am not familiar with the class but it is wonderful. The atmosphere is very nice and everyone is like friends from the beginning. We are very happy.” They are now looking forward to sailing in next week’s World Championship.

The crew have sailed together before, but only in other classes. Juhonen has been in 5.5 Metre for five years but, Heikkilä explains, “Pekka Honkavaara and I used to sail H Boats, so we are very used to each other and that helps a lot with learning of course and I as can read him and he can read me, and we have sailed with Roope also in other classes.”

On sailing the 5.5, he said, “It is a fantastic boat One of the best boats I ever sailed in my life. I haven’t sailed so many boats but still I really enjoy sailing this boat. I have not raced for 10 years but when Roope asked me to sail here I said why not and then when we sailed I was really happy. We enjoy it a lot and we have good fun all the time.”

“But the boat is wonderful, excellent. The lines are beautiful. It’s really good to sail.”

With the Scandinavian Gold Cup and Class Cups now concluded, the fleet is preparing for the World Championship, which begins on Monday.

They will be joined by newcomers Girls on Film (GBR 40, Peter Morton, Ben Cornish, Sam Haines), the only boat to take a race off Artemis XIV last week.

Racing for the 2019 5.5 Metre World Championship begins on Monday 29 July with a 9 race series scheduled, ending on Friday 2 August.