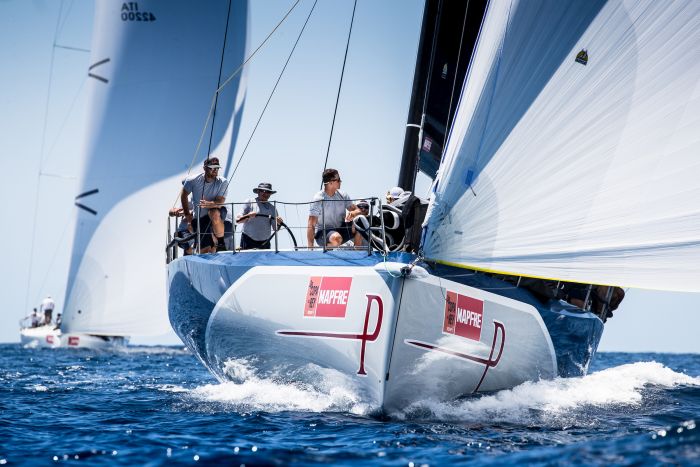 General classification leaders of the Mallorca Sotheby’s IRC division, better known as the Maxi72s, the BMW ORC Class 0 which is primarily TP52s or 52 foot derivatives and the 14 strong ClubSwan 50s all reported that they had used the supply of beneficial windshifts to make their crucial gains during what proved to be a fairly typical Bay of Palma seabreeze opening day.

Germany’s Mallorcan based Markus Wieser, who previously guided Momo to success on these waters and to two Maxi72 world championship wins, sails as strategist on Proteus in support of tactician Mark Mendelblatt. On the race dock at the Real Club Nautico de Palma Wieser recalled, “We were sailing on the far away outside course and it was very light and shifty. Sometimes the right was good and sometimes the left, but I think we read it well. There were a lot of gains and losses to be made.”

Proteus was third at the upwind mark first time up on Race 1 but sailed a good first run and passed Cannonball and on the second upwind picked off Bella Mente. In the second race when the breeze had built slightly and Proteus got to the left and was just ahead of Bella Mente on the upwind mark, then they sailed the shifts well on the downwind and stayed ahead to post two bullets for the day.

“The second race we stretched a little. I think we are not yet where we could be boatspeed wise. We have a very small groove upwind and so the helm is up and down a lot, so we can and will improve this week. And the boat feels better is stronger winds. We have not sailed the boat a lot this season because we broke the mast in Antigua.”

In the BMW ORC Class 0, Rowdy Too leads. The Botin designed IRC 52 won here last year as Beau Geste and returns skippered by Timothy Goodbody with Jeremy Robinson calling tactics. They opened with a 2,1 today.

“We are pleased with our day. We took the lead on the first downwind and sailed away a bit on the first run. There was a lot of dirty air to avoid from the other fleets. On the second race we had 10-12kts and were second at the top mark again, this time behind Team Vision Future, we passed them on the run, we made a mistake at the top of the beat and they got through us again, we passed them downwind and it was plain sailing after that,” explained Robinson.

The boat remains almost identical to last year in terms of configuration and set up, except for a new mainsail for this event. Other than the IRC Europeans in San Remo where they finished third, the boat has not done many big regattas so far this season as there was a shipping delay when the boat came from the Florida.

Leonardo Ferragamo’s Cuordileone leads after the first day thanks to their 2,1 scoreline. Fourth last year and runners up in 2017, Ferragamo’s crew has Tomasso Chieffi as tactician in a very strong class which has King Harald of Norway racing his Fram XVIII.

“We some ups and downs and it was very shifty so in the end we have a good day. We were down in fifth I think at one point in the first race but worked our way from third on the second round to take the lead and win, just down to reading the shifts especially downwind. The second race we were fifth or sixth early on and then passed three boats on the second beat again, again we just used the shifts one after the other. That furthest away course has very little geographic influence. So two time we came from fifth or sixth to win using the shifts, a little bit of boatspeed and I suppose being smart,” Chieffi recalled.

Speaking of the new scoring system which is being used here, where the preliminary series aggregate define the points from 1 to 14 in the case of the ClubSwan 50s, carried into the Finals races.

“Second and a first like today should count for more usually but now you get to Thursday and it starts again, you can have none of your points cushion carried forwards. That can be very tough for the guy who has worked hard to build a points lead, but let’s see.”