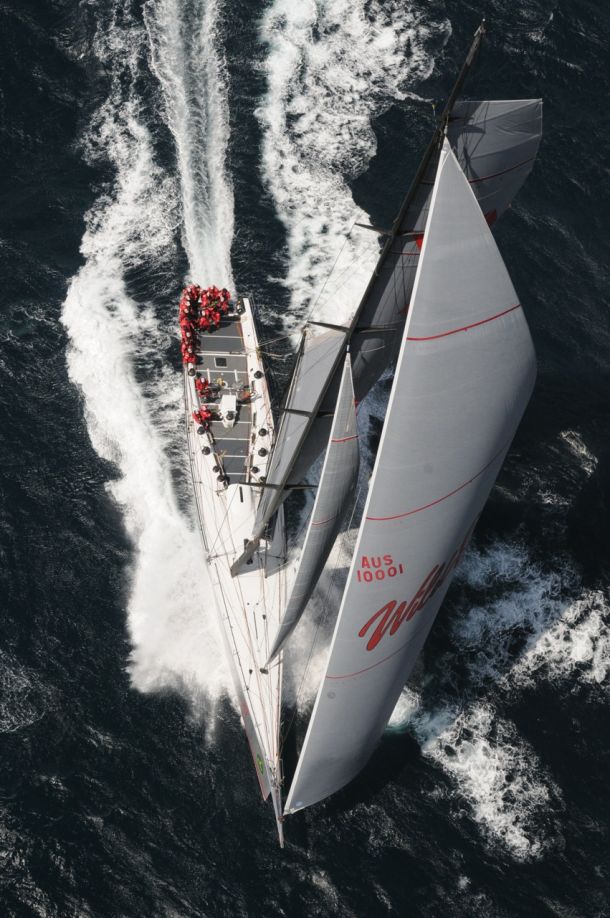 Record breaking Australian supermaxi yacht, Wild Oats XI, will be hunting for a hurricane and dodging debris after she starts in the 2225 nautical mile Transpac Race from Los Angeles to Hawaii on Saturday.

The sleek, 100ft long sloop, which is entered in the classic on a joint charter arrangement between famous Californian yachtsman, Roy P. Disney, and the yacht’s Australian owner, Bob Oatley AO, is out to score the fastest time for the race, and hopefully break the course record mark of 5 days, 14 hours, 36 minutes, 20 seconds, set in 2009.

On the current weather forecast, issued 72 hours before the start, it’s a task that’s not impossible to achieve.

The key to success lies with a hurricane, located well to the south of the race course, which is expected to track slowly north-west towards the fleet at the weekend. Should Wild Oats XI be able to sail to within 200 nautical miles of the eye of that storm she should pick up a slingshot effect from strong favourable winds and be averaging between 20 and 25 knots. Australian yachting meteorologist Roger Badham predicts that if this occurs, skipper Mark Richards and his crew could anticipate a race “about as fast as you could ever hope for”.

“So much depends on where the hurricane decides to go,” Richard said. “If it does come north towards our track then I expect you will see Wild Oats XI really clocking up the miles.”

When asked if a race record time might be possible, or even a 24-hour world record run, Richards smiled and said, “It’s a yacht race, so anything’s possible. Right now you would have to say it’s looking promising for a fast race. But if the weather pattern changes it might take us eight days to get there, instead of five.”

During the race the Wild Oats XI crew, like all others aboard the 61 competing yachts, will be confronted by another threat in the mid-Pacific in the form of debris, some of it natural, but the majority man-made. Crews will be constantly on the lookout for large objects which, in the event of a collision, could cause considerable damage to a racing yacht. Incredibly, some of this debris is believed to have originated from the Fukushima earthquake and tsunami in Japan in 2011.

Roy P. Disney, a veteran of 20 Transpac races, said that he has been alarmed by the increase in flotsam on the race course in recent years.

“In this race in the 1970’s you would be lucky to see three pieces of debris or rubbish in a week. Today you see that in an hour. There are millions of tons of it floating out there, from logs and semi-submerged shipping containers to general trash.

“Apart from the dangers that come with hitting a large object, the biggest problem for us is the number of discarded commercial fishing nets that are drifting around. If you get one of those wrapped around your keel you could be stuck with it for hours – and it can be a dangerous task for the crew when it comes to removing it.”

Disney said he was pleased that the race had become part of The Ocean Cleanup campaign. Competing yachts will be reporting the sighting and location of significant and dangerous pieces to debris during the race, and on their return voyage home.