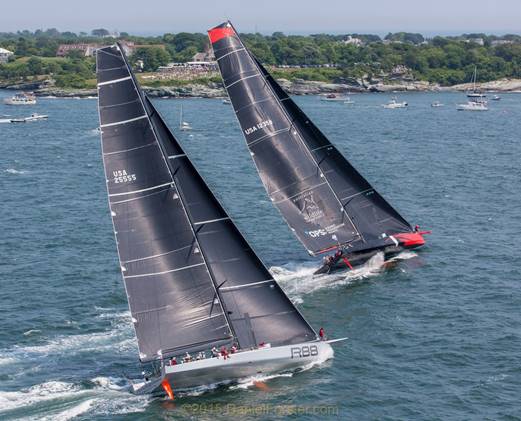 George David’s Rambler 88 was roughly 120 miles astern when her rival, Jim Clark and Kristy Hinze-Clark’s 100’ Comanche, crossed the finish line at The Lizard off the south coast of England on Monday, 13 July, at 1:49 EDT. Rambler 88 eventually followed at 04:46 EDT, for an elapsed time of 7 days 14 hours 32 minutes – and, on corrected time, a massive 7 hours and 11 minutes win over her larger opponent.

Rambler 88’s sailing manager and tactician Brad Butterworth commented: “The boat performed pretty well. It took us a while to get ourselves sorted out with the sail combinations and we were experimenting with the side boards all the while we were racing. It got windy around day four, when the sea state didn’t really suit us and it wasn’t until the last two days when we felt comfortable against the big boat [Comanche].”

According to the four time America’s Cup winner, Rambler 88 didn’t break anything during the race, despite seeing strong winds for the second two thirds of it. “It is going to take a while for us to get the ultimate out of it. We were doing what we could to go as fast as possible. Believe me there was plenty of water coming over the deck. It was as wet downstairs as it was upstairs.”

A boat that did a fine job of hanging on to Rambler 88, finishing just four hours after her on the water, was another of the final four starters, Peter Aschenbrenner’s 66’ Irens-Cabaret designed trimaran, Paradox. She is unusual in being ostensibly a fully-fledged racer, like Lloyd Thornburg’s MOD70 Phaedo³, but down below hides a proper owner’s cabin, a refrigerator, running hot water and even the ultimate luxury of a flushing toilet. And yet this ultimate racer cruiser is capable of daily runs which only a couple of decades ago would have made her the world’s fastest offshore race boat.

Sailing on board was the world’s fastest sailor, Australian Paul Larsen, who described the ride: “It was just a classic transatlantic multihull blast – everything was just saturated and everyone was still in the same underpants they started off in, eyes were raw, beds were getting wetter and wetter until you’re just sleeping in your foul weather gear. It was fantastic!”

The fastest part of their voyage was reaching under masthead genniker along the southern side of Point Alpha, the ice exclusion zone, with the boat making 30 knots. “The top mast was bending and everything was loaded up,” Larsen recalled. “We raced it really hard and she just took it. We certainly weren’t treating it like a cruising boat”

Aside from this, one of the highlights of the trip was the start in Newport, when Paradox luffed her three-hulled rival Phaedo³ into irons, which Larsen admitted gave them a warm feeling for the remainder of the voyage.

Rather than sail all the way to the Solent, the exhausted and sodden crew chose to put into Dartmouth last night to regroup and get warm and dry.

This is Huntington’s eighth transatlantic race and he says it was exceptional: “Never have I seen the pattern of us catching a southwesterly all the way across the ocean; it never let up, we never had any soft spots. This is the fastest passage I have done; usually it takes around 20 days, but we have done this in eleven and a half. I could not have imagined that we would have done that.”

At present it appears that Snow Lion has won Class 3 by a crushing 15 hours, although there are several boats yet to finish.

The last few days Huntington said he was amazed by the relentless high speed running conditions, in 18-25 knot winds, which remained steady in direction and speed causing them to register a new top speed of 27 knots. “It is about the fastest we’ve ever been. When you do that, there is water everywhere – it keeps your attention!”

Sadly Snow Lion had to retire from the Coastal Race between The Lizard and Cowes when she sustained a tear in her mainsail.

One of the greatest stories of this Transatlantic Race 2015 is the participation of Dorade, the 53’ yacht that a young Olin Stephens, of S&S design house fame, campaigned in this same race 84 years ago. Today the restored boat is being raced by Matt Brooks who won the 2013 Transpac with her to repeat Dorade’s 1936 victory in that race. He hoped to repeat the boat’s 1931 Transatlantic Race victory this year.

Dorade did not manage to repeat her success, as conditions favored newer, more powerful boats. South African America’s Cup sailor Mike Giles, who has been brought on as sailing master, described sailing this piece of ocean racing history: “Anything you know about modern boats and how they should be sailed, you have to erase out of your mind – this is a different animal altogether. Reaching or upwind – don’t even try. If you are going downwind she rocks a lot and you have to be mindful of safety, because everything is done at the mast and for the past five days there’s been no moon…”

The boat has less stability so you have to reef early, although over the course of the race, with time to be recovered towards the end, this was redefined. “When we started sailing, we said we’d reef at 23 knots and it would be kite down at 26,” Giles continued. “The last 48 hours coming in [in more wind than this], we had full main, A4 [spinnaker], full mizzen, mizzen, kite, staysail, no moon, while absolutely sending it, rocking from pole tip in the water to boom tip. We did 30-odd sail changes in that last period.”

Despite this last giant effort Dorade was unable to beat the biggest boat in the fleet, Mariette of 1915, to victory in the Classic division and IRC Class 4, but finished a respectable second in both. Most importantly Dorade finished in just under 14 days 23 hours to take more than a day off Olin Stephens’ 1931 time.

Father and son team Bill and William Hubbard returned for this their third Transatlantic Race, their first having been in this event 10 years ago aboard their S&S-designed IOR boat, Tempest. This time they were back on their newly acquired Reichel-Pugh 56, Siren.

“Last time took 18 days and it was fairly pleasant,” Hubbard Senior recalled with a wry grin. “This year there were a few trials and tribulations – to put it mildly.” He seemed relieved that it was his son who had been on deck when the wind speed topped out at 60 knots (Force 11 on the Beaufort Scale).

“We had split the main and we had the trysail on and the No. 2 jib,” recounted his son. “We tried to protect the sails by going fast, as going along at 20 knots in 60 knots isn’t so bad…” During this period Siren’s speed peaked at 27 knots.

Conditions did take their toll on both boat and crew. “There was a lot of water – we had green water coming the full length of the boat,” recounted Hubbard Junior. “Phil [Wilmer] broke a couple of ribs when he got thrown into the helm station.”

Destroying sails was also becoming quite common place on board, but fortunately they had a sewing machine with which to fix them. Unfortunately in using this they underestimated its power consumption and as a result weren’t able to start the engine. “So we were operating on handheld GPS and no watermaker,” said Hubbard Senior. This remained the case until last night at 2200 local time, when they dipped into Plymouth where they were met by an electrician who was able to fix the issue. “A big cheer went up after that.”