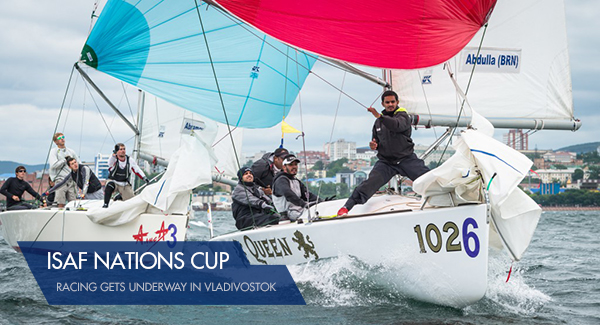 The eighth edition of the ISAF Nations Cup Grand Final commenced today in Vladivostok, Russia with 14 teams competing in the Open and Women's Divisions.

Day one saw 27 face-offs with America's Nicole Breault and Russia's Vladimir Lypavskiy enjoying the best of the day, holding 100% records. The American has two from two whilst the Russian holds four victories from his on-water battles. The regatta is in its early stages so the American and Russian teams won't be resting on their laurels moving forward.

The 2015 edition of the ISAF Nations Cup Grand Final welcomes back the victors from the 2013 edition that was held in Middelfart, Denmark. The women's winners, Brazil, are represented by the team that brought them success two years ago, led by Juliana Senfft. After the opening day Senfft has a win and a loss to her name.

2013 Open gold medallists, Australia, have Evan Walker leading the charge. The Australian picked up three victories from the opening day but was hit by an in-form Lypavskiy. Nonetheless Walker remains in a good position moving into the second day.

Formed in 1991, the ISAF Nations Cup aims to broaden the availability of match racing to provide international competition for sailors at a reasonable cost. The Grand Final welcomes qualifiers from each of the Regional Finals ensuring a wide spread of nationalities engaging in the sailing discipline.

With teams from Brazil, America, Great Britain, Algeria, Bahrain, Japan and Australia competing at the 2015 edition, the spread of nations covers every continent with all of the competitors capable of taking the honours.

Throughout the years the Nations Cup has also welcomed some of today's finest sailors. Names such as Jesper Bank (DEN), Ed Baird (USA), Roy Heiner (NED) and Peter Holmberg (ISV) have all represented their nation at the event so expect to see this year's winners in the big time soon.