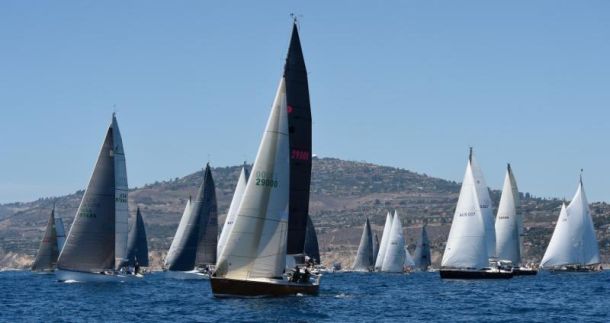 The first start of the 2015 Transpac. Photo Doug Gifford/Ultimate Sailing.

San Pedro, CA – Under clear skies and in a light westerly breeze that is promising to build through the evening, the first 22 entries in Divisions 7 and 8 have started their 2225-mile race today in the 48th edition of the LA – Honolulu Transpac. This biennial ocean racing classic is organized by the Transpacific YC.

The fleet starting today was a broad mix of designs, from the 1907 sail training schooner Martha sailed by a crew of 11 to the relatively new 30-foot Italian sportboat Fortissimo II sailed by a team of four from Japan. All must clear the West End of Catalina Island before heading over the horizon en route to a finish line at Diamond Head on the island of Oahu.

The start with 22 boats did get a little crowded today, with a minor collision incident occurring in the starting area, with Ron Simonson's Jeanneau SO44 Sleeper seen to be doing some penalty turns. But they have some time and space now to make up any lost time with over 2000 miles to go.

The weather forecast looks favorable for this fleet to get out off the coast: for tonight through Wednesday the northwest wind is forecast to be 10-20 knots with 4-8-foot seas from 60 to 150 miles off the Southern California coast. The headings the crews take will then depend on their overall strategy: stay close to the rhumb line to minimize distance, or stray south, typically to get to more breeze.

But its complicated…with the El Nino upon us this year, the patterns are not typical for the northern Pacific: warm surface waters on the coast have created many anomalies in the weather patterns, including the drought conditions experienced in California over the past year and more, and even the cold winters in the East. Another effect of the warm water is to allow tropical cyclones to drift further north than usual, and some may affect those in the southerly routes of the Transpac course, explained forecaster Joe Sienkiewicz, Acting Director of the NOAA/NWS Ocean Prediction Center, in his weather briefing on Saturday.

While this sounds ominous, it may also be a blessing: the combination of the Lows to the south combined with a strong High to the north can compress the gradient into creating favorable conditions for fast rides to Hawaii. After all, Transpac records were broken in other El Nino years too: Merlin's record set in 1977 and Alfa Romeo's existing record set in the last El Nino in 2005.

“We are looking forward to the great winds at the start,” said Jim LaBarge from Pasadena, CA, who was about to leave the dock this morning to race his Jeanneau 54DS Avanti. “We're thrilled to not encounter any dead zones in the evening. We have a great crew, all positive people, everyone all pumped up and ready to go.”

Kevin Rooney of Davenport, CA was also excited to shove off on his Santa Cruz 40 Kokopelli. “After a year and a half of prep work, its great to finally getting going. We're looking forward to a safe, fast passage. We have 8 on board, all good sailors.”

Randy Alcorn is racing Steve Campos's Hobie 33 Bazinga, a long light and fast design in Division 7, which excels in downwind performance. He said this morning “We're really looking forward to getting out and around Catalina and getting rolling – getting up on a plane and taking those long, long rides.”

All boats have GPS trackers provided by Yellowbrick, where the boat's position, speed and heading will be continuously reported on the Yellowbrick website, with a 6 hour delay in the reports viewable at http://yb.tl/transpac2015. The first official 0600 PDT position reports will need to be reported by 0700 PDT tomorrow, and about an hour later will be collated and ready for posting.

Tomorrow will also be the first of a daily race analysis video will be made by Seahorse Magazine USA editor Dobbs Davis, with the link viewable on the Transpac YC home page.

Upcoming events on the Transpac calendar: