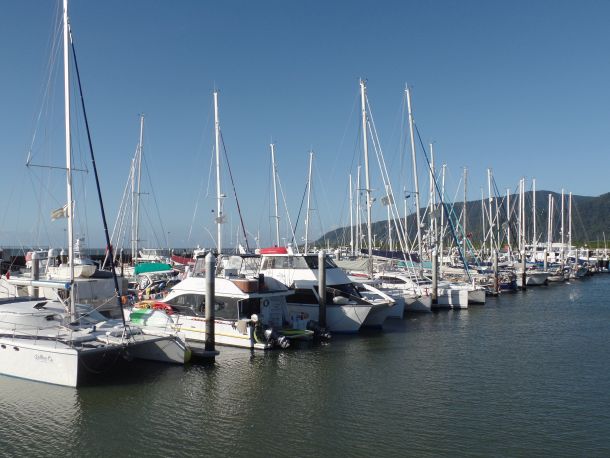 52 Cruising boats of all shapes and sizes from all over the world, came together for the start of the Multihull Solutions 2015 Sail 2 Indonesia Rally run by the Island Cruising Association.

The official muster was held at the Cairns Cruising Yacht Squadron who hosted the fleet from the 1st to the 5th of July for workshops, rally briefings, orientation and a meeting with Australian Customs getting the rules explained and filling forms to complete the hard work.

There was also a fair bit of fun, as there always is with rallies, including a welcome cocktail party hosted by the Indonesia Ministry of Tourism. Then the fleet rocked the night away with the Barbary Coasters and a Parrot Head Party at CCYS. The fleet took up the challenge with many arriving in costume to compete for prizes by the rally’s main sponsor, Multihull Solutions.

Rally organiser, John Martin (Island Cruising Association) said Cairns was the perfect location to launch the rally because of the city’s ability to host premier aquatic events and its location on the Far North Queensland coast. “Cairns and especially the Cairns Cruising Yacht Squadron offer so much and were instrumental in our getting the boats away. The CCYS has facilitated the muster beautifully.

“The Sail 2 Indonesia Rally would not be possible without the resources our Indonesian partners bring to the table,” said Martin. “There’s a lot of paperwork for the participating boats both before and during the cruise through Indonesia and Raymond Lesmana, our Indonesia Rally Control, in association with the Ministry of Tourism, make this process a smooth one.”

The rally also takes a new route through Indonesia with a new entry port this year, Debut. “Feedback from last year’s participants highlighted the need for a more cruiser-friendly introduction to Indonesia,” said Martin.

“Many of the fleet headed north last year and cruised the Banda area finding it an extraordinary region, so we tasked Raymond and his team with including this area in the 2015 program. As a result the entry point of Debut in the Western Banda Sea is now followed by a cruise through the Spice Islands, before the contingents head south to continue on the more typical rally route. This is a major improvement to the itinerary thanks to Raymond and his team and their intimate knowledge of Indonesia’s best cruising areas.”

This year also sees another partner assisting in the growth of this event, Multihull Solutions. ICA director John Martin said that Multihull Solutions’ support is a great boost for the event. “Multihull Solutions is the leading multihull specialist in Australia, New Zealand and Asia, and we are delighted to have them join us as the rally continues to grow into one of the region’s major cruising events,” Martin said.

“Multihulls have become increasingly popular over recent years and are a major component in the 2015 and 2016 rally, accounting for over a third of the fleet. Multihull Solutions’ support is a real bonus for us and all the participants,” he said.

Multihull Solutions Asia General Manager Andrew de Bruin said the company was also excited to become involved in the popular event. “The Sail 2 Indonesia Rally is the perfect way to truly experience the majesty of this wonderful cruising region, and multihulls are the ideal vessel upon which to enjoy this adventure,” said de Bruin.

“We are passionate about helping more cruisers not only discover these breathtaking cruising grounds, but also learn the enormous advantages that today’s multihulls offer for cruisers who want the best in performance, space, comfort, safety and style,” he said.

Dot King, on the sailing vessel Bali Hai had this to say: “over the past few days we have met the other participants from 50 plus boats, attended briefings, partied and commenced the customs process en masse to make exiting Australia easier when we all sail out of Thursday Island in a couple of weeks.

“The information sessions were informative and interesting and the excitement in the room in all the sessions was palpable.

“We came to realise that cruisers like us are very important to the Indonesian economy – evidenced by the fact that no less than nine dignitaries flew from Indonesia to Cairns to take part in the ceremonies and briefings.

“As well as being given lots of information during the briefings about our destinations and some of the things we might experience, we were presented with t-shirts, an Indonesian mobile phone SIM card so we can contact Raymond, our Indonesian 'Mr Fixit' and organiser extraordinaire, a battle flag, a cruising log book containing all kinds of information and a beautiful book with information and photographs of each of our 20 official stops.

“The group of more than one hundred people from all over the world including New Zealand, Australia, England, Northern Ireland, The Netherlands, Germany, USA, Canada (and those are just the ones I've met) seems really fun, knowledgeable and really interesting.

“Well, the preparation is done and we are excited, a bit nervous but very happy to be at the start of this amazing adventure at last!

“Thanks must go to the Cairns Cruising Yacht Squadron whose Commodore Steve Johnson and all the staff were most hospitable, helpful and friendly. Many thanks also to John and Lyn from ICA for all their hard work and patience.”

The participants now have just over two weeks to cruise north from the Queensland coast to the Torres Strait for final clearance from Australian waters at Thursday Island. Expected arrival at Debut in Indonesia is set for the 26th or 27th of July followed by four months of cruising wonderful Indonesia.