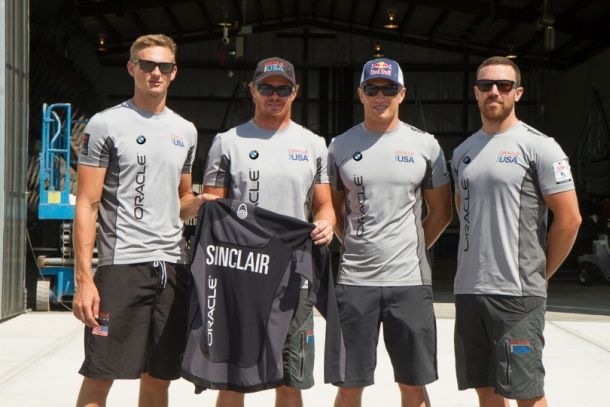 Skipper Jimmy Spithill (AUS) will lead his team into the first event of the Louis Vuitton America’s Cup World Series in Portsmouth later this month.

“It was bit of a challenge to select the crew for this event,” Slingsby said. “We have a lot of talent and depth among our sailing team. But I think we have a good mix of experience and youth on this crew and we’ve rewarded some of the hard work put in by the guys over the past weeks and months.”

The racing in Portsmouth, England marks the first event of the new America’s Cup cycle. Six teams will be on the starting line, with all five challengers looking to set down a marker against the defending champion ORACLE TEAM USA. The anticipation of getting back out on the race course is palpable.

“Competition is really what drives us as sailors,” said skipper Jimmy Spithill. “For us, we want to get out there and post a good result on the board.”

ORACLE TEAM USA finished its training in Bermuda last week and the race crew is shifting the south coast of England to start preparing for the competition.

“We’ll do some training in the new boats which we haven’t seen or sailed in yet,” said Kyle Langford referring to the AC45F boats. These are updated versions of the boats used in the previous America’s Cup World Series, modified to foil.

“That’s one of the great things about sailing. You’re forced to pick up these new skills and adapt to a new boat and learn quickly,” Langford said. “That’s the challenge and that’s what makes it fun.”

Louis Sinclair, the rookie on the team, elected to get to Portsmouth in a more traditional fashion. He sailed there, racing on Comanche in the Transatlantic Race, and was part of the crew that set a new monohull 24 hour distance record.

ORACLE TEAM USA plans to begin training in the UK as early as Tuesday and will sail as much as possible leading into the practice race day for the Louis Vuitton America’s Cup World Series Portsmouth on July 24.