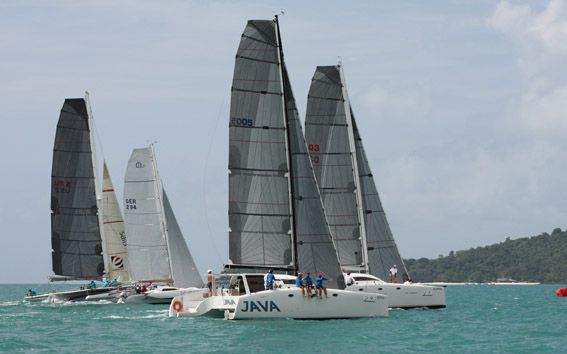 PHUKET, Thailand – A near-record fleet is set to compete this week in the 12th Cape Panwa Hotel Phuket Raceweek off Phuket's southeast coast. Racing over four days from 16th to 19th July, the 38-strong fleet sees two TP52s competing in IRC Racing I, one of the largest multihull fleets ever assembled in local waters and a 68-foot former Whitbread Racer.

Split over seven classes, the fleet looks to be competitive and diverse in equal measure, with crews flying in from as far a field as the UK and Australia to compete in the award-winning regatta and season-opener of the 2015/16 AsianYachting Grand Prix.

“We're very pleased with this years entries, both in quality and quantity. There are some top crews from around the world coming to race this year and the class splits will ensure close competition for all,” said Mr. Byron Jones, Managing Director of organisers Media Business Services Co. Ltd. (MBS).

A clear sign of the popularity of multihull racing in the region, at seventeen entries this year they make up nearly half the fleet, and are split into three classes: Multihull Racing, Firefly 850 and the Corsair Class.

Multihull Racing sees five locally-built catamarans up against three trimarans – Danny Moore's Three itch, Mark Horwood's 40-foot Andrenalin and Henry Kaye's Sweet Chariot – while the Firefly 850 and Corsair Class are both one design with five and four entries respectively, including the recently-launched four Corsair Pulse 600's making their first appearance at the Regatta.

“The popularity of multihull racing in Phuket has grown significantly in recent years. We have actively encouraged the multihull fleet and this year welcome one of the biggest multihull fleets we've ever had,” added Jones.

Following a lightening strike on their way to Phuket, Blue Note were forced to pull out. However, David Dimmock and his crew have moved quickly to charter the Swan 42 Foo 4 (ex Katsu) and will compete in IRC Racing II leaving the TP52's to go head-to-head in IRC Racing I.

“After discussions with the Race Management team and IRC representative, there will be eight evenly-matched boats competing in IRC Racing II and we expect this to be one of the toughest classes to win. We have separated out the TP52s and they will race together in IRC Racing I. This will allow for more competitive racing and also give the Race Management more flexibility over course choice,” added Jones.

On their first competitive outing, Ben Copley's recently acquired TP52 Kodo (ex Team Origin) is up against Ahern/ Bailey/ Wilmer's well-campaigned Oi! A strong performer in light air racing, Oi! will be hard to beat but Phuket-based Copley and crew will be hoping their local knowledge gives them an edge.

Eight boats competing in IRC Racing II makes it the joint-largest class in the Regatta. Stuart Williamson on his renamed Beneteau 34.7, Old Mutual International Endeavour of Whitby, has been competing in the Regatta for many years and is always in the mix come the final day but he'll have to be on top form as crews on BeauX Esprits, Fujin, Ruby Tuesday, Foo 4, and the two Farr 30's Foreign Affair and Judy, will be pushing hard.

All will be keeping a close eye on the in-form boat, Jessandra II, however, who skippered by Red Bull Racing Australia Principal Roland Dane, are on a hot streak following their Samui Regatta win just six weeks ago.

Looking to improve on their third place last year is the Thai team on Sansiri Windstar, but they'll have to overcome Astraeus, Mas Allegre, the all-female team on Sailescapes Farrgo Ladies, Kantus’ Bride (skippered by Tirapongse Pangsrivongse, owner and CEO of the Cape Panwa Hotel's owning group, Cape & Kantary Hotels) and the stripped out Farr 1104s Sail in Asia Piccolo in the IRC Cruising class.

The unknown in this class is new entry La Flute Enchantee, which is likely to turn a few heads and cameras. Designed and built for the 1973 round-the-world Whitbread Race in which she finished third under the name Kriter, she is now owned today by Brian Hume, recently underwent a refit in Myanmar and is now based in Phuket.

Rounding out the fleet is the Charter/ Bareboat class. Dominated by Australian skippers and crew, Venture, Uhuru, Phailin and Fei Yu are all local charter boats being raced by international crews and ranging from 32 to 46-foot, this class looks to be a hard one to pick.

“The weather forecasts indicate varied conditions later this week which I'm sure will keep everyone on their toes, while onshore we have some great parties and entertainment lined up for sailors and friends,” commented Jones.