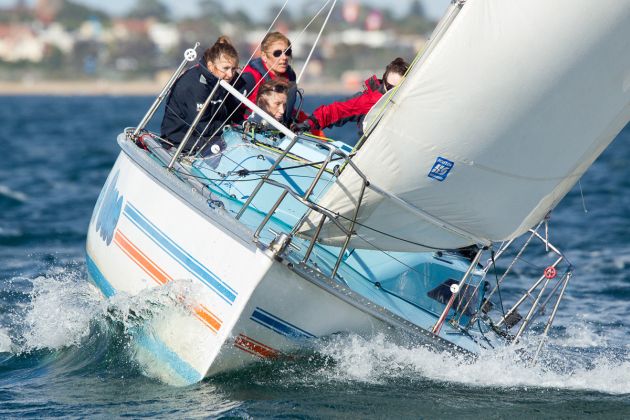 Twenty-seven mixed crews led by their female helm turned up at Royal Brighton Yacht Club (RBYC) last Saturday morning, April 30, many keen to add more heavy weather experience to their repertoire. By start time some of the less seasoned helms had made the prudent decision not to start in the 20-30 knot northerlies, leaving the rest to press on.

Winds eased to 18-20kts throughout the afternoon and seas stayed flat with the northerly flow, then overnight conditions worsened thanks to thunderstorm activity generating strong 30-35kt NW-W winds blowing onshore and churning up Port Phillip.

Sunday’s long BLiSS race was meant to be scored for the RBYC Associates Cup and Race 5 of the 2016 Port Phillip Women’s Championship Series but all racing was abandoned, cutting short the points addition and the BLiSS timetable. Instead crews went straight to a pre-planned lunch and trophy presentation where the vibe was upbeat and cozy given the buffeting going on outside the Brighton bay clubhouse.

Saturday’s three races decided the BLiSS winners for 2016 and in a re-run of last year Audacious (RBYC) made a clean-sweep of IRC, AMS and YV handicap results. For the past five years Tracey Baldwin and her crew have taken out the IRC and AMS top scores. “I’ve never helmed on the bay in such strong conditions, it was a whole new experience and exciting,” Baldwin said, adding, “for as many regattas as I can remember it’s been light air so it was really great to have a different experience.”

Saturday was Baldwin’s turn to give her partner a taste of her usual role on Audacious, as the bow person/ for’ard hand/fordeckie. “I’m normally up the front, this time I sent my partner to the bow and within five minutes he was saturated, and that’s how he stayed for the next five hours. He was glaring at me…” she laughed.

Those who competed on Saturday were challenged but grateful for the opportunity to test out their skills in strong winds and generally flat waters,” said PPW championship series coordinator and BLiSS skipper Rosie Colahan who placed third in IRC and AMS skippering the Beneteau First 45 Schuss (RBYC).

As BLiSS chair, Baldwin noted more competitive women and a higher standard of sailor participating, and was delighted to welcome 14 new boats and eight first-time skippers to the annual regatta.

Among the new owner/skippers, Kellie Knowles sailing for Mornington Yacht Club competed with her S80 called Take One and an all-women crew in training for the Australian Women’s Keelboat Regatta (AWKR) in June. “I love windy days!” Knowles said. “It was the first time out with a new crew, to see how we gelled for the AWKR.”

Knowles is late to the sport and keen to cement her plan B after knee injury from a skiing accident cast doubt over that sporting pursuit. “I had a skiing injury and wasn’t sure if I’d sail again. I bought the boat last May and I’m setting it up slowly so there’s less need for so much strength, and just starting to understand the tactics of racing. I though the BLiSS regatta ran very smoothly and was well organised, and owning a lightweight boat I was relieved that day two was abandoned,” Knowles added.

A first-ever Bluebird division was added to the BLiSS program and five of these keelboats, with origins dating back to 1947, competed in their own one design fleet. Samantha Smith and Blue Volvo top scored with 1,2,2 results, too good in Saturday’s strong breeze for her Royal Yacht Club of Victoria clubmate, Jacqueline Prestedge and her Bluebird, Drambuie.

Second on IRC was Kate McCombie skippering the Beneteau First 45 Reverie and second under AMS results was Louise Cotter with Jake, a J111 design.

With the PPWCS wrapped up, the next women’s event on the bay is the AWKR for all-female crews over the June long weekend.