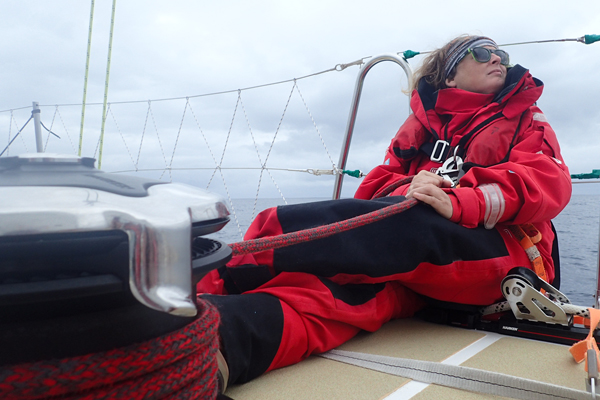 Having avoided the wind hole that held the rest of the teams captive yesterday, ClipperTelemed+ made good speed and now finds itself back in the mix with the rest of the fleet as tactics begin to play out in the PSP Logistics Panama Cup.

The teams are faced with the decision of heading further offshore in search of stronger winds in the hope this will propel them south much faster, or staying closer inshore and taking the shortest distance to Panama. The rhumb line and waypoints on the Race Viewer are set by the shortest route which explains why some teams are registered in a lower position than others despite appearing further south.

IchorCoal is the most westerly team in the fleet, and also the furthest south. But it is LMAX Exchange, the most easterly, which is currently leading the race according to its Distance to Finish. Skipper Olivier Cardin reflects positively on the last 24 hours in which time his crew has replaced Garmin in the top spot.

“Another night in light wind, playing with our windseeker between wind holes and patches of wind. Our progress was quite slow as we made only 26 nautical miles in 12 hours. It was difficult for the nerves as well. Sailing is these conditions requires a lot of concentration to try to pick up speed and not lose it.

“During the day, the wind decided to be more stable, between 5 and 11 knots. Sailing was then easier and became pleasant during the afternoon. A good shift allowed us to gybe on starboard tack. We are now going away from the coast and protecting our position from the others more offshore.”

Unsurprisingly Garmin Skipper Ash Skett is much more frustrated by the turn of events that now sees them lie in second.

“It's been a frustrating day in extremely light winds and as our speed in the fluffy stuff continues to be below par, we could only sit and watch as bothLMAX Exchange and Derry~Londonderry~Doire clawed back the miles and re-appeared on our Garmin Chartplotter.

“Thankfully the 10 knots of wind that was forecast early this morning finally arrived in the evening and we managed to pull back a few miles, we are keeping our fingers crossed that the next schedule will have us back in first place.

“Still, there's not much at all in it and we are going to have to stay focussed and be on our game when the winds drop off again if we want to win this one.”

After five days of racing, and more than 600 nautical miles covered there are only 75 nautical miles between all the teams according to the Distance to Finish readings at 0900 UTC. With all the yachts sailing almost parallel, it makes for tight racing with everyone keeping a close eye on each other and marking every move.

“It's a little bit crazy that after so long out here on the ocean we can still pick up half the fleet on our computer screen in the nav station,” reports Huw Fernie, Visit Seattle Skipper. “It means that as soon as anyone tries anything different we all know about it, and we also know if it's worth copying. Tactically there isn't much to do but stay in the pack we are in and keep playing with the local clouds to drive us forwards, taking small gains here and there.”

As the teams approach the Baja California, the East Pacific High starts to extend a ridge down which will bring moderate circulations. Decisions made at this point could prove significant because it will be easy to either fall off the east side of it or come too far west and hit the fluffy section of the ridge itself. A tricky balancing act for the Skippers and crew.

So whose tactics will pay off in the PSP Logistics Panama Cup: the inshore teams that currently top the leaderboard or those that have taken the risk of running further offshore in the hope of longer term gain? Stay tuned to the Race Viewer to find out.