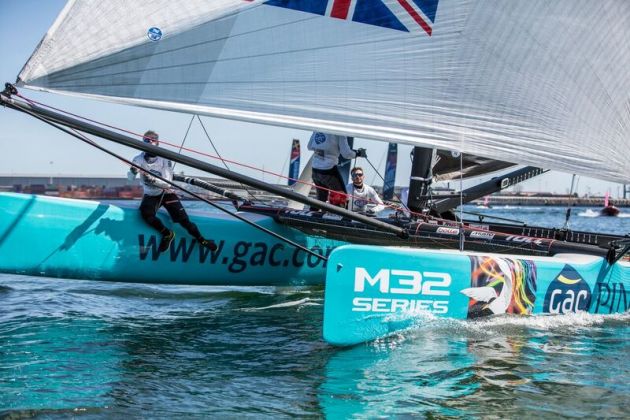 Copenhagen May 5th, 2016. Defending champion Taylor Canfield and his US One team proved that their overall victory last year’s was no fluke, claiming four out of seven races on the opening day of the 2016 M32 Scandinavian Series.

Conditions were relatively stable on Copenhagen’s Tuborg Havn, with the sun out and a chill in the air to remind competitors they are racing their high speed catamarans in Scandinavia. The light to moderate wind was enough for the M32s to sail fully powered up, allowing crews to fly their hulls providing a thrilling sight for the spectators, enjoying the regatta’s shore-based hospitality.

“It was definitely a good day just getting back in the groove,” said Canfield, who last year won all but one of the M32 Scandinavian Series’ five events. “We haven’t sailed together for a couple of months, but everything went well. We are still learning as a team, so today we were figuring out where we can improve – that was the name of the game, but it is always nice to come away with a few wins.”

Today’s six to ten knot northeasterly was inshore in direction and provided an easy start for the crews on the opening day of racing at the 2016 M32 Scandinavian Series. However Canfield observed that these conditions are often the hardest in which to perform. “In those conditions, it is easy for everyone to sail the boat, and everyone does well. So be able to excel in those conditions, we’re happy.

“Today, you had to get off the line well. We did that in a couple of races, but we also found ourselves back in the pack and having to battle back. It’s good to know that we have the ability to battle back through the fleet.”

At the end of day one, Canfield’s US One team holds an eight point lead over his long term match racing rival, Britain’s Ian Williams and GAC Pindar. There is a further seven point gap back to Nicolai Sehested on Essiq Racing Team in third, the top Dane winning today’s second race.

Ian Williams, a six time Match Racing World Champion, has spent most of the last years locking horns with Canfield’s team. William's team rounded off the day in style, claiming the final race.

“We had a terrible start in the first race and that put us on the back foot early on,” said Williams of today’s racing. “We were struggling a little bit for speed early on because we’ve got a new mainsail with a different shape to the one we had last year and are trying to learn the settings for that. But we are happy with how it is going. Those guys [US One] are very fast, but hopefully we can get going and catch them up.”

During the day, racing was getting close and closer. After Yann Guichard’s French crew on Spindrift racing claimed race four, they led for most of race five before losing out in a three way dive for the finish line against Canfield and Williams.

Racing continues at the M32 Scandinavian Series at 1400 CET tomorrow on Tuborg Havn. Fine conditions are forecast for a second day.