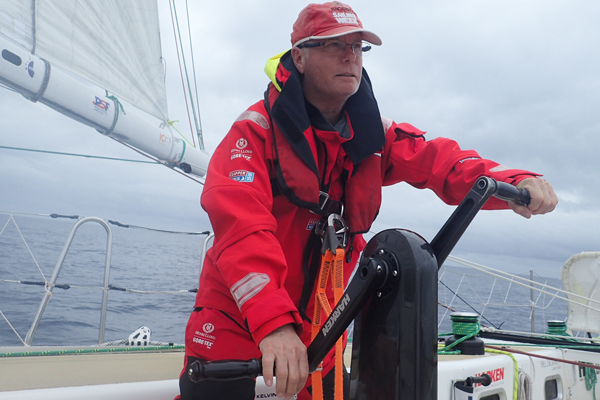 Despite the vastness of the Pacific Ocean and the possible options for the fleet in terms of inshore and offshore racing en route to Central America, the majority of the teams have converged in what Unicef Skipper Martin Clough has nicknamed “Spaghetti Junction” approximately 200 nautical miles off the western coast of the United States.

Nine teams, currently ranked from third (Mission Performance) to eleventh (ClipperTelemed+) on the Race Viewer, have been enjoying 24 hours in close company as they weave in and out of each other’s Automatic Identification Systems (AIS) and the smallest of margins determine every position.

“Welcome to Spaghetti Junction 34 18 north 125 06 west,” says Skipper Martin, whose Unicef team is currently in seventh place. “I have to report Clipper 70s, Sir…Thousands of them!”

“As I write, Unicef is in the centre of the ‘Inter Clipper Race Convergence Zone’ and after a day when we thought we had been on a bad tack and blown an advantage, we have emerged in a healthy position, currently following Qingdao in a line astern parade of sail. Mission Performance Skipper Greg I trust you appreciated our lightweight Mexican waves last night in honour of your presence! Unicef’s tack line shackle accidentally released in a timely fashion before being smartly reattached by a quick Nick Allard, one of our circumnavigating crew!” he explained in his daily report.

“A small low to the south of us should hopefully move away to allow some quality sailing and racing over the next three days. That should put some much needed mileage under our belts and allow the gybing battles to run their course.”

Less than two miles ahead of Unicef is Qingdao in fifth place, with PSP Logistics sitting between them. Qingdao Skipper Bob Beggs says it is difficult to gain any advantage in the current conditions.

“The day has been spent flying the lightweight spinnaker. We have been exchanging tacks with many yachts today, with Unicef, Mission Performance, GREAT Britain, and Derry~Londonderry~Doire all appearing on the AIS at various times. The fleet is all very close at this early stage in the race with light winds forecast further to the south it makes it difficult for a yacht to completely break away.”

LMAX Exchange is still number one in the PSP Logistics Panama Cup leaderboard as its easterly position gives it the shortest Distance to Finish, followed by Garmin. Having been one of the more easterly boats and in third place 24 hours ago, Derry~Londonderry~Doire now finds itself in the mix further offshore. This gamble has seen Skipper Daniel Smith and his crew drop to tenth in the standings.

“Our options were to chase Garmin and LMAX Exchange further inshore or gybe and try and get out west where there is more wind and Ichorcoal have been making great mileage. It has taken us a lot longer to get across but we are starting to benefit from the stronger winds that they have had out here for a while,” explains Skipper Daniel.

“Hopefully winds will hold and it will give us something to work with as we try and fight our way towards the front. For now the challenge is to make good mileage and also try and get ourselves back to the south-east when the opportunity arrives.”

Who will be first to pass through Spaghetti Junction and will the westerly course begin to prove beneficial for the teams as they aim to move up the leaderboard? Stay tuned to the Race Viewer to find out what happens next in PSP Logistics Panama Cup.