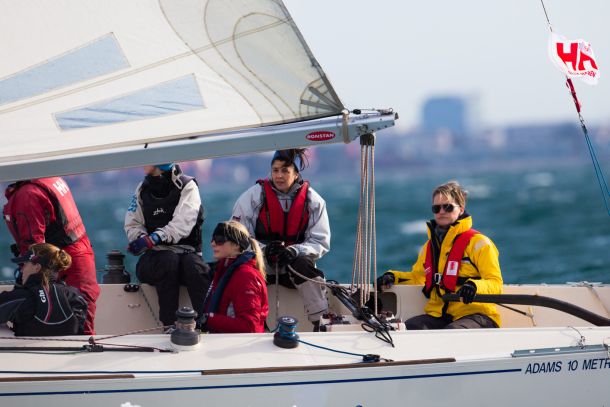 The 25th anniversary Australian Women’s Keelboat Regatta fleet took on the Bureau of Meteorology’s strong wind warning and ticked off the full series card of six races on a cold and whipped up Port Phillip.

Just as the last race six finisher crossed the line the race committee recorded a north-westerly gust of 32 knots on the start boat that had begun pitching wildly in the deteriorating seas abeam of St Kilda on Melbourne’s east side. Sails were reefed down all day and only a few of the brave and most experienced teams hoisted spinnakers for a final thrilling kite ride home.

Event Handicap (EHC) and IRC division 1 winner Jungle Juice, owned by Royal Melbourne Yacht Squadron commodore Janet Dean and helmed for the first time at a regatta by Dee Mason, stayed balanced and powered up in the average 18 knots. “The progression of the crew over the series was brilliant,” Mason said. “We had three brilliant young CYCA women sailors fly down especially from Sydney and we are all so happy for Janet’s first regatta win with her boat. In retrospect having the day off yesterday was a good thing,” she beamed.

Today’s surge of adrenaline made up for the disappointment some felt when racing was cancelled yesterday after the Bureau of Meteorology issued a gale warning.

A fleet of 25 lined up for today’s three deciding races and by the end only four had retired and left the course. Incidents were minimal – one person went overboard and was quickly retrieved, a couple sustained minor injuries and expectedly there was some gear failure.

The best EHC division 2 point scorer, Mandy McEvoy’s S80 Rock n Roll, lived up to its moniker when a sudden squirt sent the Fremantle Sailing Club team into a Chinese gybe. “I was really happy with our recovery from the wipe-out, and we went on to win that race,” said the skipper.

Helmsperson of Rock n Roll Kirsten Norris said, “ironing out our boat handling on the fly was tricky. We had a new pit and mast person and a 15 year-old on the bow and in 20 plus knots we flew the kite for five of the six down-winders.”

Final S80 and IRC division 2 honours went to Melinda Henshaw’s Royal New Zealand Yacht Squadron team on Recycled Reputation. The Olympic 470 sailor from the 2000 Games led a polished program to finish the anniversary women’s regatta with the perfect scorecard of five points (one drop) under both IRC and S80 results.

AWKR founder and Australia’s first female commodore of a royal yacht club, Gai Clough, was the race committee’s guest of honour today, Monday June 8, 2015, and willingly jumped in to record finish times. “It’s remarkable to be out here…. where did those 25 years go? You see the competitors and the standard of the fleet and it’s exciting. I feel very proud,” Clough acknowledged.

“The RMYS commodore at the time was remarkable, the club was broke and then I walked in having been to New Zealand and proposed the idea of starting our own Australian series. At the time we weren’t encouraging women into the sport. We begged boats, created the lecture series and went training. Creating the keelboat series was about introducing women into sailing and giving them the platform and competency to go onto other things.”

Clough went on from the AWKR to sail in national titles and represent Australia overseas multiple times, mostly in the J24 one design class. She still actively races her Farr 740 and her daughter Sarah competed in this series skippering an SB20 sports boat.

Fourteen different yacht clubs fielded competitors for the AWKR’s silver jubilee and some of those supported their teams to be part of the unique Queen’s Birthday long weekend regatta.

Women’s participation in sailing is in good hands in Victoria. The state body Yachting Victoria formalised the Women and Girls in Sailing Committee three years ago and set strategic targets in relation to the percentage of women members at yacht clubs and in club leadership roles. Chair Rosie Colahan says, “not only has participation increased but the connection between women from different clubs at the top of the bay has improved.”

AWKR committee chair Jody Lukeman had these final words: “We thank our major sponsors Helly Hansen, Club Marine, IBG Insurance and Logie-Smith Lanyon Lawyers for their support. We were delighted to get all scheduled races in. Many thanks to the race committee, competitors, and the boat owners who lent their boats. We look forward to welcoming competitors next year and to the event continuing to grow.”

Crews are gathering this evening at RMYS for the official trophy presentation.