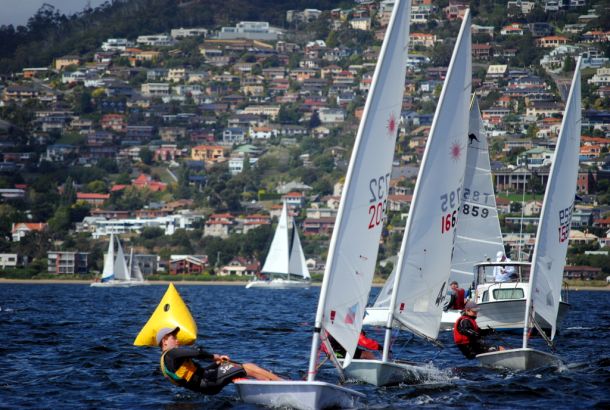 When Sydney sailor James Berman flew down to Hobart to coach two of the Royal Yacht Club of Tasmania’s champion young sailors this weekend he wasn’t expecting such an eventful day on the River Derwent.

At the end of a day of coaching Laser 4.7 sailors Sam King and Josh Ragg in heavy weather sailing with the north-westerly wind gusting to 40 knots plus, Berman today saved a J24 class yacht adrift as the galeforce winds swept it down the river to possible destruction.

Single-handed, Berman manoeuvred the RYCT’s inflatable coach boat alongside the yacht, hooked a line through what was left of its broken mooring line, and towed it back to the club marina.

Berman has been coaching young Tasmanian sailors for the past eight years, firstly the Sabot squad and now giving specialist coach to King and Ragg as they prepare to contest the Laser 4.7 youth world championships at Medemblik, Holland, from 6-14 August.

“I was escorting Sam and Josh back up the river when I spotted the yacht obviously adrift off Sandy Bay; the boys were handling the conditions well, so I dashed over to the boat and, with some difficulty, got it in tow,” Berman said. “If I hadn’t seen the boat, a J24, who knows where it may have ended up.

“Today’s coaching was about improving technical issues in boat handling and in sailing on a hard reach, because, at the worlds, they tend to send the big fleets on long reach legs,” the coach added. “They certainly got the wind for that today; I sent Sam off in one big gust and he must have been hitting close to 20 knots… there wasn’t much boat in the water as he surfed downwind.”

A member of Hunter’s Hill Sailing Club and past competitor on the international circuit as a Laser sailor, with a second in the Laser Radial worlds to his credit, Berman contacted the grateful owner of the runaway yacht after mooring it at the RPAYC.

Late autumn-early winter north-westerly gales have lashed Hobart and the River Derwent over the past two weekends. Last weekend a steel cruising yacht went aground on the eastern shore after it lost steering in 35 knot winds. Today, the winds were gusting to 42 knots.