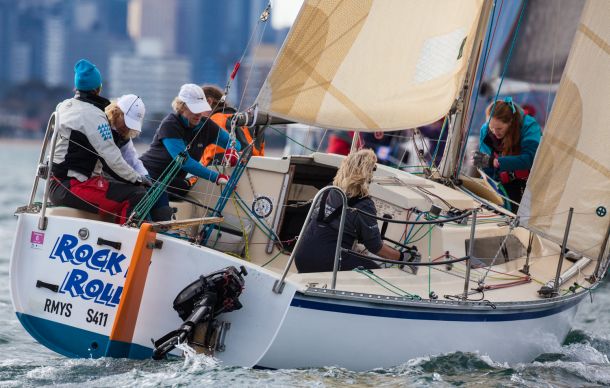 Though it’s the race committee’s intention to run two races on Port Phillip tomorrow, Sunday June 7, 2015, the forecast indicates 20-25 knots on the track by the first warning signal at 0955hrs.

Mainsheet hand Claire Hunting reckons the day’s highlight was pumping out the tunes in between races and dancing to keep warm. “The racing highlights were our race two start and given we’ve never sailed as a team before, our teamwork was amazing,” Hunting said. If tomorrow’s strong northerlies eventuate she says they’ll go out but acknowledges “it won’t be stress-free”.

Illustrating how tight it is at the top of division 1 EHC results, a weeny one point margin separates the top four placegetters. Salamander III is second to More Noise on a countback and Phantom and Tigris are a point off, in third and fourth.

Division 2 EHC leading skipper Mandy McEvoy, who has borrowed Steve Barker’s S80 Rock n Roll, said today’s mild conditions and flat water made for a great regatta opener for the Fremantle Sailing Club crew. “It was competitive but friendly racing. For us, we may have well have taken three bullets we are so delighted. It’s our first time sailing together on a new boat and the crew work was excellent. To see people learning is the number one thing for me.”

Second to Rock n Roll in EHC div 2 is another S80, Recycled Reputation led by New Zealand skipper Melinda Henshaw. Supported by the Royal New Zealand Yacht Squadron, the crew of five experienced sailors including three who took out the New Zealand women’s nationals in the MRX class, are appreciative of the boat loan and being part of the event’s silver anniversary.

Back in 1991 after travelling across the Tasman to the NZ National Women’s Keelboat Championship, AWKR founder Gai Clough was quoted as saying, “after competing in that regatta, it was obvious that New Zealand showed the way as being the frontrunner in promoting women’s sailing.

A lot more than the hairstyles have changed since the inaugural Australian Women’s Keelboat Regatta back in 1991. Sabina Rosser is the only competitor with all 25 AWKR notches on her sailing belt and she vividly remembers crews came ashore for lunch in between races at the inaugural event.

The memory is stuck firmly because on the way back to the RMYS Rosser dived off the St. Kilda Pier to rescue a young boy who had ridden his bike off the edge. “The kid who was about five rode off the pier and was in trouble. The father was taking his time so I dived in fully dressed. I remember they had to find me some dry clothes for the next race.” This Queen’s Birthday long weekend Rosser is skippering her regular ride, the S80 Mood Indigo.

The AWKR race committee will meet in the morning to review the conditions and will send the record 25 crews and around 160 sailors out if they feel it’s safe to do so.