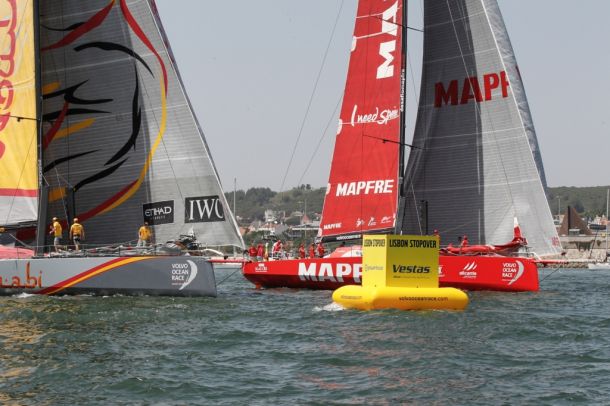 LISBON, Portugal, June 6 – Spanish boat MAPFRE (Iker Martínez/ESP) won their second Volvo Ocean Race in-port race running on Saturday, but only with two metres to spare after a thrilling contest in the Portuguese sun. Helmed by skipper Iker Martínez, who needed all his feted match-racing skills, MAPFRE edged past Abu Dhabi Ocean Racing (Ian Walker/GBR) in a sprint to the finish line as they gybed together at exactly the same time.

At one stage, it looked as if the Spanish boat would take a penalty for blocking the Emirati boat’s path, but former 2004 Olympic champion, Martínez, judged the final manouevre to perfection.

The win, one second ahead, moves the Spaniards back into an outside chance of a podium finish in the series after winning the previous in-port race in Newport, Rhode Island, last month (see Scoreboard).

However, beaten skipper Ian Walker of Abu Dhabi Ocean Racing, will not be disappointed for long. His crew’s second place leaves them well clear in the overall in-port standings, with eight of the 10 races completed. Their closest rivals, Team Brunel (Bouwe Bekking/NED), struggled for much of the course, which was cut from six to five legs by the Race Committee, due to decreasing winds on the tidal Tagus River.

For so long, MAPFRE had looked to have the race safely in their pockets.

Team SCA (Sam Davies/GBR) led the seven-strong fleet across the line, only to be penalised for starting too early (OCS – on course side). The unlucky all-women’s crew, who later battled back heroically to take fourth place, were forced to turn back against the tide to re-cross the line, losing dozens of metres to their rivals.

From then, MAPFRE looked in complete control, taking a 400-metre lead at the third mark, but just when it appeared to be a done deal, Abu Dhabi Ocean Racing stormed back in stronger wind on Leg 4 and briefly snatched the lead from them.

Undaunted, Martínez slipped his boat across the Emirati yacht in a grandstand finish to take the gun.

Team Alvimedica (Charlie Enright/USA), who, pre-race, had trained in nearby Cascais, used their local knowledge for a solid third-place podium spot, but the drama was by no means over.

Team SCA and Team Vestas Wind (Chris Nicholson/AUS) had a near copy of the MAPFRE/Abu Dhabi Ocean Racing showdown, both approaching the finish within metres of each other. Vestas Wind, however, was then, unfortunately, snagged on the finish mark and forced to complete a turn and re-cross the line allowing Team Brunel and a disappointed Dongfeng Race Team (Charles Caudrelier/FRA) to pass and leave them trailing in the seventh and final position.

Team Vestas Wind, whose crew member Nicolai Sehested (DEN) was left stranded on the mark as he tried to free the boat, were returning after a six-month absence from the race having grounded on an Indian Ocean reef during Leg 2, necessitating a complete boat rebuild.