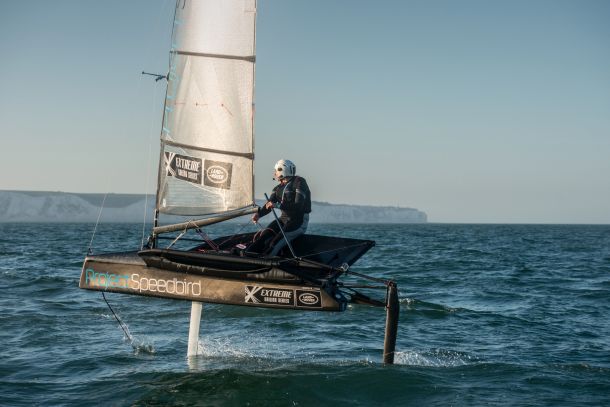 Hannah approaches the White Cliffs of Dover at the end of her Channel crossing. Image courtesy Anthony Cullen

Hannah White has become the fastest person to cross the English Channel in a single-handed dinghy.

White completed the gruelling task in a hydrofoil Moth, a small boat which lifts above the water on two hydrofoils as it gathers speed. Starting from Cap de Gris in France, she landed in Dover, England, after crossing the 24 mile English channel in a record time of 3 hours, 44 minutes and 39 seconds.

Hannah, a relative beginner in hydrofoil sailing and already a Land Rover global ambassador, only started to learn how to master the Moth in February. Training for this Channel crossing challenge is a precursor to her ultimate quest: to break the Women’s Speed Sailing World Record over one nautical mile next year in a unique, purpose-built sailing hydrofoil.

A keen adventurer, Hannah has previously sailed the Atlantic solo three times, participated in the gruelling Haute Route Cycle Race across the French Alps and kayaked 205 miles across the rivers of England. She has been a Land Rover Global Ambassador since 2013. “I’m much more used to an arduous 3000-mile slog across oceans as opposed to a 24-mile sprint across the Channel, so the transition has been a real eye-opener. Speed sailing requires a very different physiology to long distance races, so this was really an opportunity for me to build my skills over a shorter distance in a hydrofoiling boat”.

Hannah will be attempting to break the Women’s Speed Sailing Record over one nautical mile in the first quarter of 2016 in Speedbird, her state-of-the-art, unique hydrofoil sailboat. Land Rover is collaborating in the development of the Speedbird boat, drawing from its engineering expertise and industry-leading facilities to ensure the boat is capable of breaking the current world record.

Hannah will be exhibiting the Speedbird boat at the Cardiff Act of the Extreme Sailing Series™ on the 18-21 June 2015.