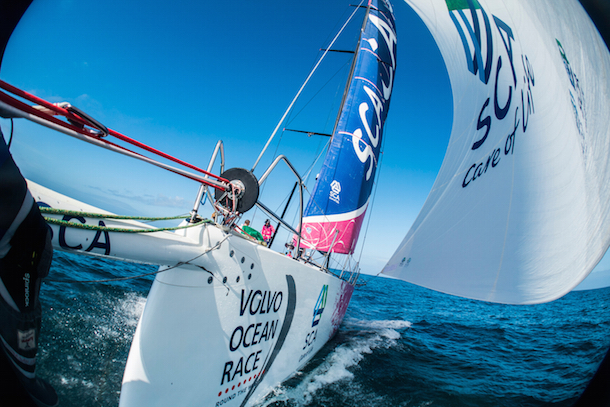 Team SCA (Sam Davies/GBR) continued to clasp firmly on to their slim advantage in tough conditions on day three of Leg 8 to Lorient, France, on Tuesday,  a fairy-tale success tantalisingly in their sights.

At 0930 UTC on Tuesday, they maintained a lead of 8.5 nautical miles (nm) with just over 400nm of the stage still to negotiate.

“It’s blowing a solid 30 knots in four-metre waves, it’s on the edge. We haven’t seen proper upwind sailing like this so far in the race,” said Volvo Ocean Race official meteorologist, Gonzalo Infante.

Team SCA’s navigator, Libby Greenhalgh (GBR), told Inside Track on Tuesday that the wind and sea state were delaying their planned tack back towards the French coast as they approach Brittany in 24 hours.

On Tuesday, they were the first boat to reach the Bay of Biscay to the west of the main pack.

So far, the female crew have improved leg on leg since the race start in October, but have not posted a result better than sixth in any of them.

Behind the first all-women’s crew to enter offshore sailing’s toughest challenge since 2001-02, is another boat for which a podium finish would be a dream result: Team Vestas Wind (Chris Nicholson/AUS).

The blue boat was a near write-off after a collision with a reef in the Indian Ocean last November during Leg 2, yet an incredible effort and near total re-build restored the crew to the eighth stage start line in Lisbon.

Few expected Chris Nicholson’s crew to be competitive after such a long layoff, but they have been at the forefront of the seven-boat fleet from the first night on Sunday and only trailed Sam Davies’ crew by 8.5nm early on Tuesday.

Meanwhile, the rest of the fleet face a dilemma: whether to follow Team SCA and Team Vestas Wind’s course further offshore, or hug the Spanish/French shorelines, where the winds may be stronger.

Explained Infante: “Just because the winds are stronger nearer land, doesn’t mean that the boats there will go faster. There’s the sea state and stability of the boats to take into consideration.”

Behind the leading two, there is so much to play for. Currently, Abu Dhabi Ocean Racing (Ian Walker/GBR) are third and, crucially, ahead of the two boats closest to them in the standings, Team Brunel (Bouwe Bekking/NED) and Dongfeng Race Team (Charles Caudrelier/FRA).

The Emirati crew is determined to stretch their six-point lead over the pair in a race that looks likely to go down to the wire in the final stopover of Gothenburg, via a pit-stop in The Hague.

MAPFRE (Xabi Fernández/ESP) and Team Alvimedica (Charlie Enright/USA) did much of their pre-race training in the Atlantic and are also right in the hunt in this intriguing, short leg.

The boats are currently estimated to arrive in Lorient on Thursday (June 11) between 0200-0400 UTC. They will have a short maintenance period before setting off for the climax of the nine-month, 38,739nm marathon the following Tuesday, June 16.