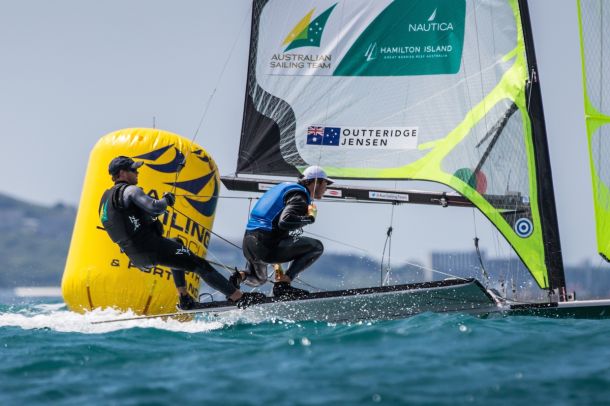 The eyes of the sailing world are back on Weymouth and Portland with Olympic medallists returning to the venue of the London 2012 Olympic Sailing Competition for the ISAF Sailing World Cup Weymouth/Portland, which kicked-off on Wednesday, 15 June 2015.

The first day of racing at ISAF Sailing World Cup Weymouth and Portland sprang a few surprises with an uncommon north-easterly breeze ranging from 10-17 knots increasing during the day testing the fleet.

The 49er, including 2012 Olympic gold medallists Nathan Outteridge and Iain Jensen and a total of four Australian crews in the 39-boat fleet, were the first ones out on the London 2012 waters and got three races in.

The glory of winning the first race of the regatta went to Australian young guns Joel Turner (QLD) and Lewis Brake (QLD). Outteridge and Jensen did not have the best start and finished the first race in 30th, but a win in race two and a seventh in race three put them into overall second, just a point behind Przbytek and Kolodzinski (POL). Their main rivals, Peter Burling and Blair Tuke had an ordinary day by their standards and sit in 12th place, 12 points off the lead.

“It was great to get sailing again and this is a very familiar place for us,” Iain Jensen said after the race. “We had a bit of an up and down day with our first race being pretty average and two good results after that. It was a tricky day and a lot of boats had similar issue as us with very inconsistent results across the fleet. Anyone with half decent results today had a good day. We have a drop now with the 30th so will have to try and sail a consistent regatta from here on.”

New combination of Australian Sailing Squad’s Will Phillips (VIC) and James Wierzbowski (VIC) sailed a strong first day posting an eleventh, fifth and thirteenth to be in eighth overall.

“We’re rapt with a first day like this and if we can have a few more races in the top ten then that would be fantastic. We’ll continue to fight for a position on the leader board and will come back tomorrow and aim to have another good day. We both need a bit of recovery now as James just flew in from Australia on Monday and I’m a bit sick so if we can recover properly for tomorrow it will be a good outcome.”

“It was a good first day here in Weymouth, typical windy and wavy,” Jason Waterhouse said. We had three races today and with a fourth, second and 20th it wasn’t the most consistent day for us. We were leading after the first two races, but dropped down a couple spots after the last race. But we’re pretty happy as this is our first regatta since the World Cup in Hyères and it was just good to get the feet wet and we’re quite happy with the results.”

In the Laser the internal Australian battle is on with 19-year old Matt Wearn (WA) finishing the day in fifth and one point ahead of World #1 Tom Burton (NSW). In the Finn class the first day was a bit more clear-cut between Australian Sailing Squad’s two sailors after an eighth place for Jake Lilley (QLD) and Oliver Tweddell (VIC) following in 23rd after two races.

In other results, Australian Sailing Squad’s Joanna Sterling (QLD) won the first of three races to be in overall seventh place in the RS:X, while fellow Queenslander and Laser Radial sailor Ashley Stoddart had a couple of solid races to sit in tenth on her birthday. Three races were sailed in the 49erFX with Haylee Outteridge (NSW) and Sarah Cook (NSW) moving into 13th after a second place in the last race of the day and Tess Lloyd (VIC) and Caitlin Elks (WA) following in 22nd. Women’s 470 sailors Sasha Ryan (QLD) and Amelia Catt (TAS) are ranked 21st.

Also, ISAF Sailing World Cup glory and a share of the €78,000 prize fund are on offer with racing commencing on Wednesday, 10 June with a four-day series building up to the live Medal Races on Sunday 14 June.