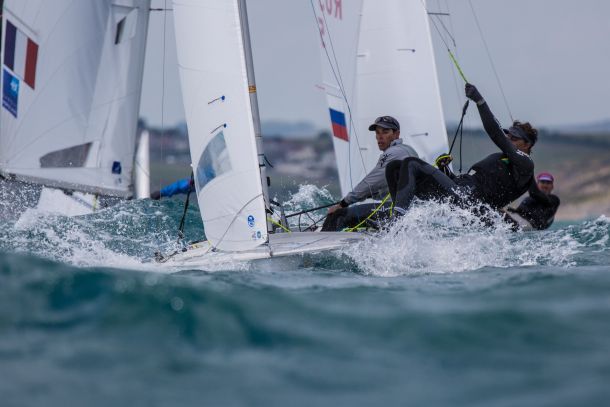 Mat Belcher and Will Ryan at Weymouth. Photo Beau Outteridge/AST.

It was another eventful day on the second day of ISAF Sailing World Cup racing at the London 2012 venue Weymouth and Portland with Australian Sailing Team’s Jason Waterhouse (NSW) and Lisa Darmanin (NSW) taking over the lead in the Nacra 17. London Olympic gold medallist Mat Belcher (QLD), who has returned to Weymouth and Portland for the first time since 2012, and World Champion crew Will Ryan move into second in the Men’s 470.

A northeasterly breeze, not shy of a shift or two, came in at 10-17 knots ensuring another day of strong competition with a full complement of racing completed.

In the first news of the day (Thursday, 11 June), Australian Sailing Team’s Jason Waterhouse (NSW) and Lisa Darmanin (NSW) took over the lead in the Nacra 17 after a consistent day of racing and winning the second of three races. Fellow team members Darren Bundock (NSW) and Nina Curtis (NSW) join them in the top five and made it two race wins for Australia by winning the first race of the day.

“We had really big swell and chop and the shifts were just as crazy as yesterday,” Jason Waterhouse said. “We changed our game strategy a bit as we were not happy with our 20th yesterday, which we are dropping, and it seems to have paid off. We’re happy to come away with some consistent races and are looking forward to more racing tomorrow.”

And crew, cousin Lisa Darmanin added: “We’re really happy with how we are sailing. Some of our manoeuvres are still a bit rusty as we haven’t done as much sailing as we’d have liked since Hyères, but it’s all good all around and it’s great to see the Aussies winning two races out of three.”

The Australians lead Matias and Brugger (SUI) by two points.

World Champions Mat Belcher and Will Ryan climbed up the results ladder into overall second (five points behind McNay/Hughes of the USA) after a second place in the first race and winning the second race of the day. Mat Belcher, who is enjoying being back racing on Weymouth’s Olympic waters, was happy to gain ground over the leading Americans of Stuart McNay and David Hughes:

“It’s nice to be back on Olympic waters. It was pretty tricky out there, but we had a one and a two today, which was the nice. The Americans, who were first after yesterday, had the same score, but we’re catching up a little bit. It’s nice to not lose any points over them and good to get into second overall, which puts us in a good position and we’re looking forward to finishing strongly over the rest of the week.”

In the Laser, the Australian battle between Matt Wearn (WA) and of World #1 Tom Burton (NSW) continues with Matt Wearn posting the stronger results and holding on to fifth place after winning one of the two races today. Andy Maloney (NZL) leads the fleet, ahead of Jesper Stalheim (SWE) and Philipp Buhl (GER).

“It was a tough day all around. The last race was good, the first one not that much,” Matt Wearn said about his race day. “But that’s just the Laser racing with a very close fleet and every mistake makes it hard to catch up. I was pretty happy I brought the first race back to 14th after I had a shocker on the first beat, rounding the first top mark in 30th.”

Tom Burton posted an eleventh and fifth place, which puts him into eighth overall.

“Yesterday was a bit rusty and today a bit better, but I’m still making a few mistakes here and there, which I need to fine-tune. I think day-by-day I will get better and the decision-making will be a bit quicker,” Burton was confident to continue to improve. “If you can make the right decision really quick, you’ll be on the money, but when you’re hesitant then sometimes you get left behind. So yesterday helped today and today will help tomorrow.”

After a strong start on day one, Australia’s 49er squad, including 2012 Olympic gold medallists Nathan Outteridge and Iain Jensen, did not have the best day with all four teams dropping down the ranks. Outteridge and Jensen dropped from second into 15th after posting a 15th, 22nd and 25th. David Gilmour (WA) and Rhys Mara (VIC) follow in 17th, Will Phillips (VIC) and James Wierzbowski (VIC) in 23rd and Joel Turner and Lewis Brake in 28th.

The Kiwi teams moved in the opposite direction with Marcus Hansen and Josh Porebski moving into second behind Victo Bergstrom and Victor Vasternas (SWE), while world champions Peter Burling and Blair Tuke moved up to third after a poor opening day by their standards.

In the 49erFX Haylee Outteridge (NSW) and Sarah Cook (NSW) hold on to 13th place after six races. The pair is the only remaining Australian 49erFX team after Tess Lloyd (VIC) and Caitlin Elks (WA) had to withdraw from the event following an injury to Tess Lloyd in Wednesday’s racing.

This is another class where New Zealand is doing well, with Alex Maloney and Molly Meech holding the lead.

In other results, Australian Sailing Squad’s Women’s 470 team of Sasha Ryan (QLD) and Amelia Catt had two solid results with a seventh and ninth place moving up into overall tenth. Australian Sailing Squad’s Joanna Sterling (QLD) also moved up into fifth place in the RS:X, while fellow Queenslander and Laser Radial sailor Ashley Stoddart climbed up one spot into overall ninth.

In the Finn class Australian Sailing Squad’s Jake Lilley (QLD) sits in tenth after four races, while Oliver Tweddell (VIC) was disqualified after jumping the start in the first race of the day (OCS) and posted a 19th in the second, which sees him stay near the back of the fleet in 22nd.

As always, the Finn class is hotly contested with Giles Scott (GBR) leading on four points, two ahead of Jonathan Lobert (FRA), with Josh Junior (NZL) a further point behind.

The Australian Sailing Team (AST) and Australian Sailing Squad (ASS) are represented in Weymouth with 20 boats in nine of the ten Olympic class events as well as with one boat in the Paralympic Sonar class. Racing commenced on Wednesday, 10 June with a four-day series building up to the live Medal Races on Sunday 14 June.