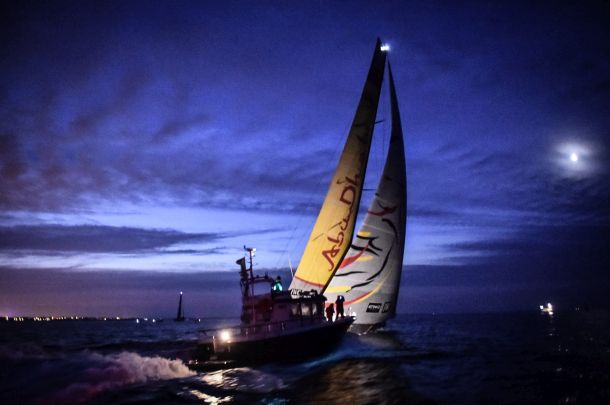 LORIENT, France, June 11 – Ian Walker (GBR) and his Abu Dhabi Ocean Racing crew all but clinched the 12th edition of offshore sailing’s toughest challenge in the early hours of Thursday, when a third place in Leg 8 left them with an eight-point lead in the Volvo Ocean Race with one stage to go.

Only a very unlikely combination of a last-place finish in Leg 9 to Gothenburg from Lorient, France, plus at least two penalty points can deprive the team of a remarkable achievement.

For Walker, 45, it is the realisation of a career ambition to become the first British skipper to win the overall trophy in the 41-year-old event, although John Chittenden won the Cruising Division of the 1989-90 edition won by Sir Peter Blake’s Steinlager2.

And it is no less of an extraordinary achievement for the Abu Dhabi Ocean Racing project, which only entered the race for the first time in 2011-12 and finished a disappointing fifth. The team and skipper Walker learnt hard lessons.

A pre-race strategy for 2014-15 of a podium finish in each leg has been carried out almost to perfection – they were fifth in Leg 7 – to take them through to a handsome victory.

Their triumph was set up at 0305 UTC/0505 local time on Thursday, when they finished in the final podium position behind fairy-tale Leg 8 winners Team SCA (Sam Davies/GBR) and runners-up, Team Vestas Wind (Chris Nicholson/AUS).

With MAPFRE (Xabi Fernández/ESP) obligingly sandwiched in fourth between Azzam and Team Brunel (Bouwe Bekking/NED), it was mission all but accomplished for Walker and his ecstatic crew.

“It's not really sunk in yet,” said a still dazed Walker. “When we passed the finish line we all went quiet and asked ourselves 'is that it?' But I can't thank our team enough. We made a plan one and a half years ago and we just carried out that plan.”

He could not resist a thought of the reaction 'back home' in Abu Dhabi. “I bet they're going nuts,” he said. “We couldn't have done it without their backing.”

Dongfeng Race Team (Charles Caudrelier/FRA), who, like Team Brunel, realistically needed to beat Abu Dhabi Ocean Racing to stand any chance of wresting the trophy away following their disappointing mast-break in Leg 5, could only finish in seventh and last place behind Team Alvimedica (Charlie Enright/USA).

To underline, once again, how close this 2014-15 race has been, though, all seven boats finished within one hour and 26 minutes of each other after three-and-a-half days of sailing from Lisbon, Portugal to Lorient.

Abu Dhabi Ocean Racing were certainly not the only team in celebratory mood on the Lorient dock. Earlier, skipper Sam Davies (GBR) and her Team SCA crew struck a resounding blow for women’s offshore sailing with the Leg 8 victory.

The comfortable victory was the first leg win for a female crew in offshore sailing’s toughest challenge since Tracy Edwards’ Maiden clinched two stage wins in Class D of the 1989-90 race.

At least as satisfying for the first all-women’s crew to enter the race in 12 years will be the opportunity to silence critics who suggested that they were looking outclassed in the current 12th edition by their experienced male rivals.

True, the Swedish entry has yet to claim a podium place until now, but the crew has clearly improved leg after leg and many observers felt that a breakthrough performance was just around the corner.

The win was certainly no fluke in an upwind leg that tested seamanship to the full with an often heinous sea state and strong winds virtually throughout.

They grabbed the 647-nautical mile leg from Lisbon by the scruff of the neck on Monday and strengthened that grip on Tuesday after taking an offshore course while most of their rivals hugged the Spanish and French coast approaching the Bay of Biscay. It took them three days 13 hours 11 minutes and 11 seconds to grab their share of Race history.

“Thanks to everybody for all your support. It's not really sunk in yet,” said a jubilant Davies. “It probably won't hit us until we hit the dock and we see there aren't any other boats there. It's a reward for all the hard work we have done. It's a great confidence booster. It's going to be huge for us. We've had a mountain to climb to get here.”

Behind them, another fairy-tale unfolded as Team Vestas Wind (Chris Nicholson/AUS) closed to a second-placed finish in their return to the race after six months out following a collision with an Indian Ocean reef on November 29 during Leg 2.

Nicholson had every reason for the huge smile on his face as he closed in to the port of Lorient following a near perfect race from Lisbon starting on Sunday. He had simply hoped that his boat could negotiate the leg without mishap and be competitive – a high podium finish is almost beyond his wildest dreams.

“I was kind of hoping we could do a fourth or fifth – but second? I’m just over the moon,” said Nicholson.

The boats will have a short maintenance period before Sunday’s SCA In-Port Race Lorient (June 14) before the fleet set sail for Gothenburg, via a much-awaited pit-stop in The Hague, on Tuesday, June 16.

The Race is anything but over, of course. No less than four boats can still finish runner-up behind Abu Dhabi Ocean Racing with Team Brunel (27 points), Dongfeng Race Team (29), MAPFRE (31) and Team Alvimedica (33) all within six points of each other. And the in-port race series is still very much alive with two races to sail in Lorient and Gothenburg.

There’s still all to sail for.