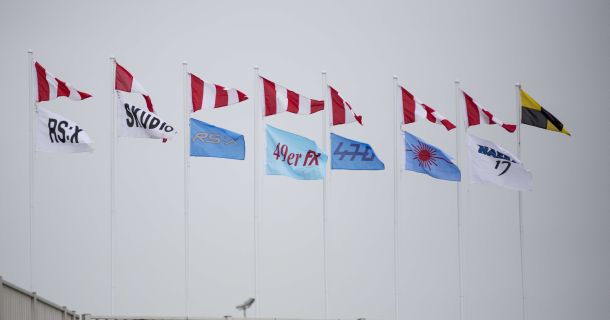 On day three of the ISAF Sailing World Cup in Weymouth and Portland the fleets headed out with a good breeze on shore, but it was soon clear that it was different story offshore, where the wind was dying quickly.

Only the men’s 470 got one race in – a race World Champions Mat Belcher (QLD) and Will Ryan (QLD) could have done without after posting a 14th, which let them drop one place into overall third. They will have three races on Saturday to make up points ahead of Sunday’s top ten medal race.

A race was attempted in the 49er, but was abandoned before the finish. This was especially unfortunate for Australian Sailing Team’s David Gilmour (WA) and Rhys Mara (VIC) who were leading at the top mark. With all four Australian 49er teams not having had the best day yesterday and ranking in-between 15th (Outteridge/Jensen) and 28th (Turner/Brake), this will put the pressure on for the four races scheduled for Saturday and to get much needed points in order to get into the medal race.

“We went out in a breeze of ten knots and when we were out there the wind was slowly dying. We started one race and when we got around the top mark we were in a pretty good position and leading at the top, but with the wind dying by bottom mark the race was cancelled and it was all over from there. Five minutes later there was absolutely no wind,” David Gilmour described the events of the day.

Currently sitting in 17th they have their task for Saturday mapped out as he explains: “We didn’t have the best day yesterday and with our goal to make the top ten medal race it would have been good to race today. The more races we get in the more chances we have to better our position. Now we got to do it all in the four races tomorrow. And we’ll need a good day to gain around 20 points to our competitors to make it into the top ten.”

All other fleets were sent home with no racing done and Thursday’s results standing.

“We were blessed with some beautiful UK weather today, the rain came and the wind didn’t. We ended up sitting out there for a few hours with no wind. So there was no racing for us today but we’ll have four races tomorrow. So they’ve chucked in an extra race for the last day of fleet racing. We’ll kick-off at 10:30 UK time and hopefully it will be a good day for us,” Lisa Darmanin said.