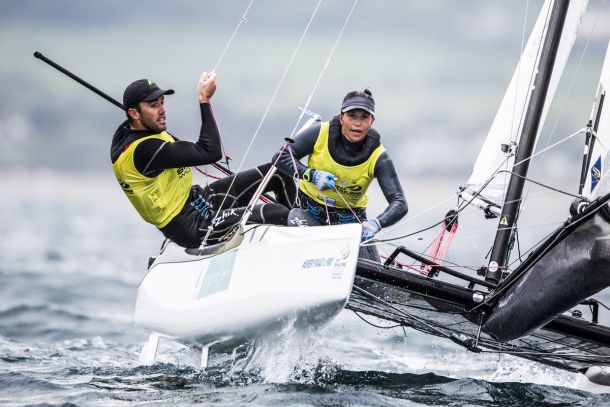 Waterhouse and Darmanin in the Nacra 17. Photo Pedro Martinez.

Australian Sailing Team’s sailors had a strong fourth and penultimate day of the ISAF Sailing World Cup in Weymouth and Portland (10-14 June) with a total of nine teams qualifying for Sunday’s final top ten-medal races in seven classes. Four teams sit in the top three medal positions ahead of the final double points race in each class.

The penultimate day of Olympic class racing and the last day of racing in the full 40-boat fleets saw an intense day with a full schedule after Friday’s racing was cancelled due to the lack of wind.

Four races were completed in the Nacra 17 fleet with two Australian Sailing Team crews qualifying for Sunday’s top-ten medal race and with both teams in medal contention.

Australian Sailing Team’s youngsters and 2014 World Championship bronze medallists Jason Waterhouse (NSW) and Lisa Darmanin (NSW) came out on top after a total of ten races and will carry the yellow leader’s jersey into the medal race. Following not far behind in fourth and tied on points with third are Olympic silver medallists Darren Bundock (NSW) and Nina Curtis (NSW). Twelve points separate the two Australian boats with anything still possible in the double points medal race.

“We couldn’t start a lawn mower today, but apart from our starts we actually sailed quite well,” Jason Waterhouse said after the race. “So we are pretty happy to have achieved our goal to increase our lead and keep the yellow jersey. We could not ask for more really and are looking forward to tomorrows medal race.”

“It will be double points for the medal race and we have some quality teams behind us, including our team mates Bundy and Nina. So we’ll need to go out there and stay aggressive. Today I think we sailed a little too conservatively, even though it played off with the points. I think we have a seven point buffer to second, which is good but it is going to be tight.”

In the Men’s 470, World Champions Mat Belcher (QLD) and Will Ryan (QLD) had three strong races posting a second, first and fourth, which moved them back up into silver position ahead of the medal race. The pair has a comfortable lead to third but it is a seven points gap to the leading Americans and it will all come down to Sunday’s medal race performance.

“This was the last day of the 40 boat finals series. It was a tough day on the water, but we are pretty happy with our second, first and fourth places. Today we had a bit more of a standard south westerly breeze and we had really good racing but quite tricky. But it’s much more fun when its windy for sure. This week we’ve basically had the best that Weymouth has to offer, a bit of sun earlier in the week and not too much rain,” Will Ryan summarises the week.

“I remember last Olympiad when the Americans where getting close to Mat and Mal and they were the last team to beat them before the games. Hopefully we can beat them tomorrow and that would put us in good stead moving forward.”

And with regards to the 470 fleet as a whole he added: “I think we are pretty lucky in the 470 that the top few guys travel to every event. The same few boats are nipping at each other’s heels, every event. Each time we get to a new event we seem to have to try and fend of someone else. Last regatta it was the Croatians, and earlier in the year it was the British and this week it is the Americans.“

In the 49er, Olympic medallists Nathan Outteridge (NSW) and Iain Jensen (NSW) had a lot of ground to make up in the final four races of fleet racing after a disappointing day two of the regatta saw them drop from second into 15th. A lost day of racing on Friday, 12 June did not help their need for points to climb up the results ladder.

Solid results (3, 4, 6, 9) on the last day of fleet racing catapulted them back up into overall sixth and thus into the medal race. But with a points gap of 28 points to third place a medal is out of reach for the pair as Nathan Outteridge explains:

“We got four races in today to catch up on what we missed yesterday. We had a pretty good day and were in the top three at the top mark in the first three races, but a few little errors around the race course cost us a few points. We were pretty happy with our overall results, but obviously it wasn’t enough to get us into medal contention. All the damage was done a couple days ago. There’s still plenty of work to do and we have another race in tomorrow’s medal race. We’ll have a look at the points, but I think the top four are out of our reach.”

Youngsters Joel Turner (QLD) and Lewis Brake had the most consistent day of the four Australian 49er teams and finished the regatta with a second place in the final race. This saw them jump up the results ladder by ten places, but a final overall 18th was not enough to get them into the medal race.

In contrast, a nail-bitting Medal Race is to be expected in the Laser with both Australian Laser sailors of Matt Wearn (WA) and World #1 Tom Burton (NSW) qualifying for the medal race in overall second and eighth respectively and with only one point separating Matt Wearn from first place.

Matt Wearn, who is Australian Sailing Team’s youngest sailor at 19-years of age, has sailed a strong regatta and another three solid results of an eighth, second and fourth place on the penultimate day moved him up from fifth to second.

Australian Sailing Squad’s Queenslanders Jo Sterling in the RSX Women, Ashley Stoddart in the Laser Radial as well asJake Lilley in the Finn Class complete the Australian contingent in Sunday’s medal races after finishing, fifth, ninth and ninth respectively in the final three races of their classes.

In other Olympic results Australian Sailing Squad’s Women’s 470 team of Sasha Ryan (QLD) and Amelia Catt (TAS) miss out of the medal race, despite a solid week, and finish the regatta 13th. Haylee Outteridge (NSW) and Sarah Cook (NSW) finish their first World Cup regatta together in 14th.

Australia’s Sonar Team of Paralympians Colin Harrison (WA), Jonathan Harris (NSW) and Russell Boaden (WA) came to Weymouth on the back of winning the silver medal at the ISAF Sailing World Cup in Hyères at the end of April and the gold at the Delta Lloyd Regatta last week.

And they continued their winning streak in the six-boat Sonar fleet at Weymouth and Portland by winning the last four of a total of six races.

“It was very tough out there today with lot of wind shifts and pressure changes with the wind coming around Portland Island. Challenging but satisfying when you get away with a win so we are very happy,” Colin Harrison said after the race.

“It was our first time back here since 2012 and it brings back memories, some of which are not great. But it’s been good to complete this regatta with a win and when we come back here next there will be good memories. Since 2012 we’ve reformed the team and have Rusty (Russell Boaden) back on the team, and he has brought a lot of experience to the front of the boat. We’ve been doing very well with our results and have been on the podium at every regatta since the 2012 Paralympics. So we’re really gelling well as a team and getting the results.”

And about the plans ahead he added: “We are all going back home now and the boat goes into a container to Rio. We’ll get to sail on the waters there in September and are looking forward to the experience, which will be our first introduction to Rio.”

Medal Races will be live from ISAF Sailing World Cup Weymouth and Portland on Sunday 14 June from 10:00 local time.

Highlights of the non-live Medal Races will be shown throughout the live show.

The Australian Sailing Team (AST) and Australian Sailing Squad (ASS) are represented in Weymouth with 20 boats in nine of the ten Olympic class events as well as with one boat in the Paralympic Sonar class. Racing commenced on Wednesday, 10 June with a four-day series building up to the live Medal Races on Sunday 14 June.