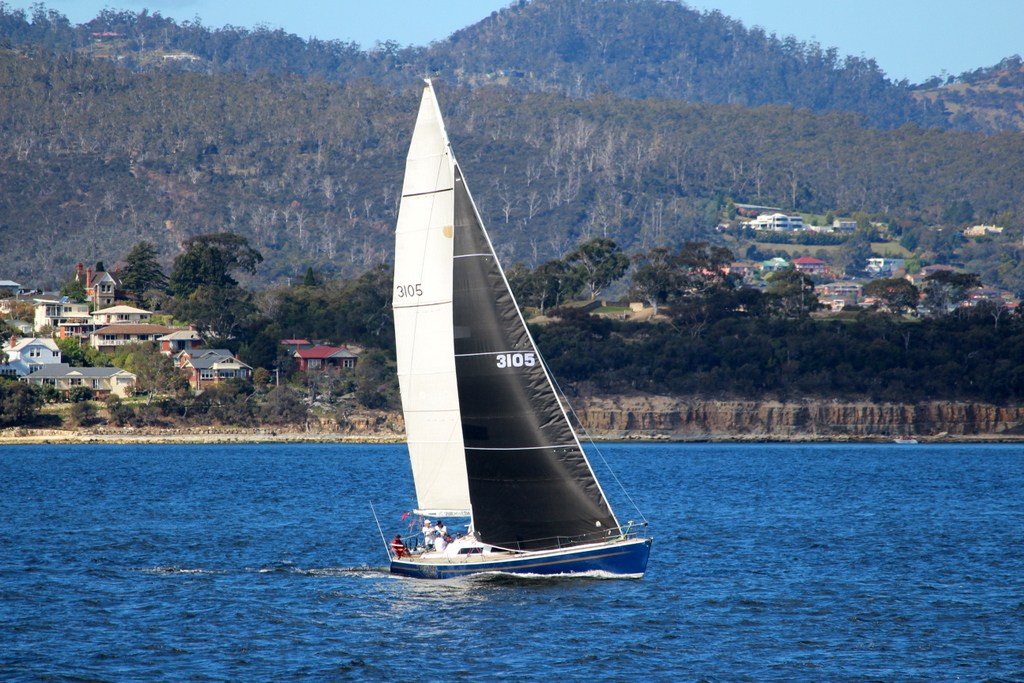 A near gale-force sou’-wester came roaring up the River Derwent at more than 30 knots this afternoon, playing havoc with the Combined Clubs Summer Pennant race, with a man overboard (MOB) situation, a dismasting and other gear damage that forced five yachts to retire.

It was a bleak day for yacht racing, with the south-westerly consistently over 30 knots whipping the river into a mass of white caps, rain showers cut visibility, and the temperature hovering between 10 and 11 degrees (it felt like 4.5).

The skippers of two of the veteran yachts of the Hobart fleet, Doctor Who (Rod Jackman) and Intrigue (Don Calvert) were among the few to carry small spinnakers back to the finish, and they came out winners on corrected time.

A crew member of Madness fell overboard as the Mumm 36 was surfing back up the river under spinnaker to the finish, but prompt action by skipper Gavin Adamson and other crew saw him quickly retrieved without any harm.

As Madness motored back to the Royal Yacht Club of the Tasmania the sodden crewman was checked out by a fellow crew member, a nurse, and quickly recovered back ashore.

Chris Sheehan’s Young 88 Saga was dismasted after the backstay broke on a spinnaker reach between Blackmans Bay and Ralphs Bay, with the crew guiding the disabled boat into a sheltered bay near White Rocks to recover the rig and sails before motoring back to Bellerive Yacht Club.

Other boats forced to retire were Crusader, Mischief and Groove, all returning to their moorings without assistance.

Wisely, Bellerive Yacht Club race officers decided that in view of the forecast of a strong south-westerly change it would be prudent to keep the fleet within the river, sailing shorter courses than a full day race.

While the front runners sailed the course in just over three hours, it was two-and-a-half hours before the last boat finished.

Nevertheless, competitors had “a lot on”, to quote Shaun Tiedemann, skipper of Philosopher.

“Although it was a square run to the finish, few of the boats elected to carry spinnakers. Oskana (Mike Pritchard) took line honours under mainsail only, apparently after having some problems with their headsail or halyard,” Garrett added.

For Doctor Who, race two of the Combined Clubs Summer Pennant was another great result, with the former Sydney Hobart winner taking out both the IRC and PHS categories of Division 1, while Intrigue took first place under AMS scoring.

In Division 3, there was a great duel between Young 88s, at least until Saga was dismasted. On corrected time Steve Chau’s Young Lion won on IRC, but Young One (N Mills/J Nibbs) won both AMS and PHS.