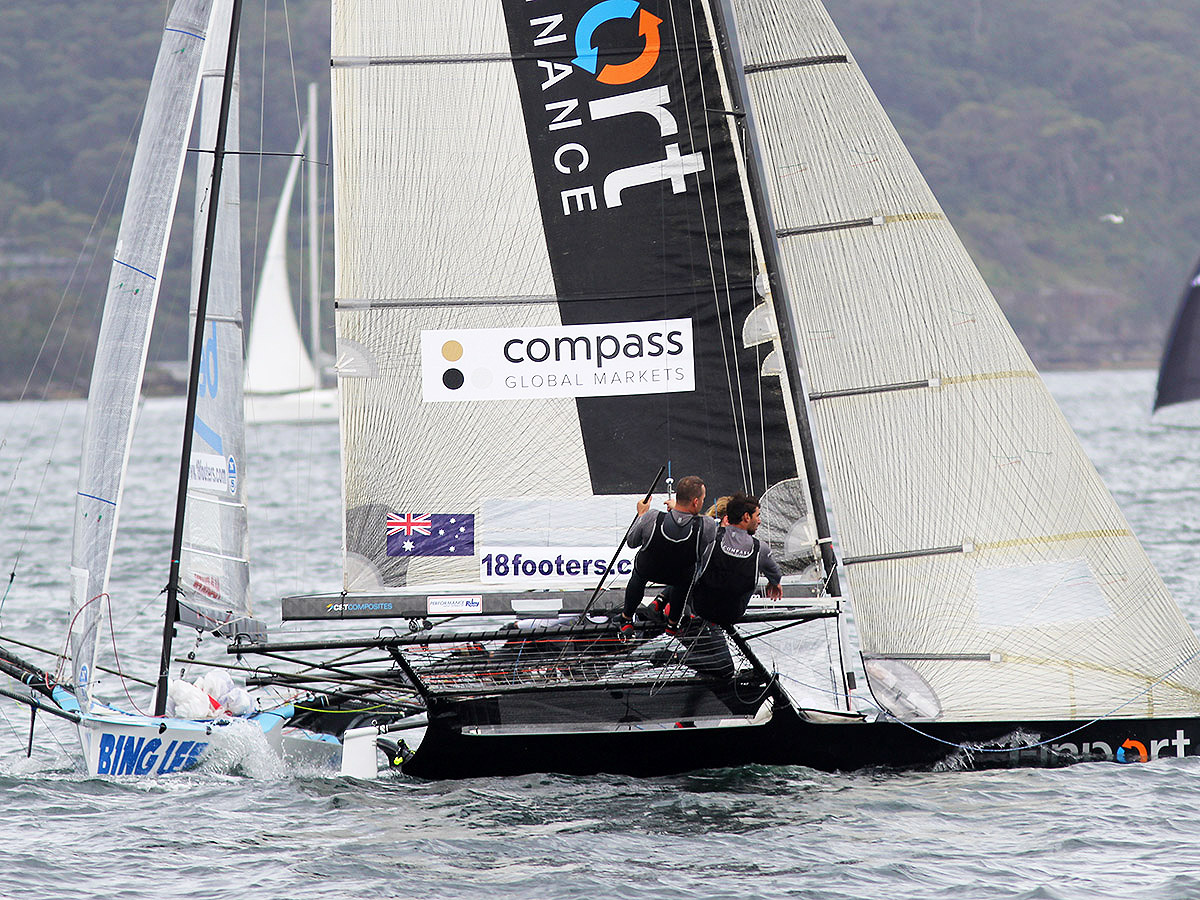 Finport home just 6s ahead of Bing Lee to take out Race 1 of the club championship. Photo Michael Chittenden.

29/10/2018
In a fading SSE breeze, the Finport Trade Finance team of Keagan York, Matt Stenta and Charlie Gundy hung on to win a heart-stopping Race 1 of the Australian 18 Footers League Club Championship on Sydney Harbour today.
After leading by 1m20s with only two legs of the course to sail, Finport had to desperately hold off the challenge by the Bing Lee team of Micah Lane, Dan Phillips and Nathan Edwards to take the victory by just 6s.
The pair totally dominated the latter half of the race, leaving the third placed Smeg (Dave O'Connor, Ricky Bridge and Mike McKensey) a further 3m48s back. One of the early race leaders, Rag & Famish Hotel (Bryce Edwards) finished fourth, ahead of Yandoo (John Winning) and Appliancesonline.com.au (Brett Van Munster).
The short work across the harbour to the Clark Island windward mark saw the fleet widely spread brfore The Kitchen Maker (Jordan Girdis) grabbed a narrow lead from Triple M (Tom Anderson) and the young Rag & Famish Hotel crew. When The kitchen Maker team had problems with the spinnaker set, Triple M and Rag & Famish Hotel quickly set the pace as the fleet raced down the long spinnaker run to Obelisk Bay.
Triple M held a 20s lead over The Rag, at the bottom mark, with Finport Trade Finance close behind, followed by Bing Lee, Yandoo, Appliancesonline, Smeg, Asko Appliances (James Dorron) and Dal Zotto (Jack Sprague).
The 15 knots of breeze at the start of the race was already showing signs of fading on the windward leg back into Rose Bay.  The experienced Finport team  had worked its way into the lead with a 20s advantage over Bing Lee. Rag & Famish Hotel was third with early leader Triple M back in fourth place, ahead of Smeg, The Oak Double Bay-4 Pines (Aron Everett), Yandoo, Asko Appliances, and Ilve )Jonathan Whitty).
Over the next two legs of the course, Finport and Bing Lee had increased their margin over the rest of the fleet but Finport had also increased her lead over Bing Lee. With one lap of the course still to sail, the race was already a two-boat affair.
Finport's margin was more than one minute over Bing Lee, and the Finport team extended it to 1m20 at the Shark Island YA mark in Rose Bay.
Bing Lee had superior speed down the final spinnaker run from Rose Bay to Athol Bay and the lead had diminished to only 30s as the pair headed back across the harbour to the finish line off Clark Island.
The now very light winds put pressure on both teams, but most of the problems came when the skiffs had to pick their way through the Manly feries, which greatly affected the breeze of both teams.
It was only when both skiffs were less than 100 metres from the finish line that the winner was confirmed as Finport Trade Finance held on for the narrow victory.
Race 3 of the Spring Championship was held in conjunction with the Club Championship, and this resulted in a win for the Bing Lee team.  Finport and Rag & Famish share the lead in that series with a total of nine points
Race 4 of the Spring Championship will be sailed next Sunday.  The club's spectator ferry will follow all the action, leaving Double Bay public wharf, at 2pm.
Frank Quealey
Australian 18 Footers League