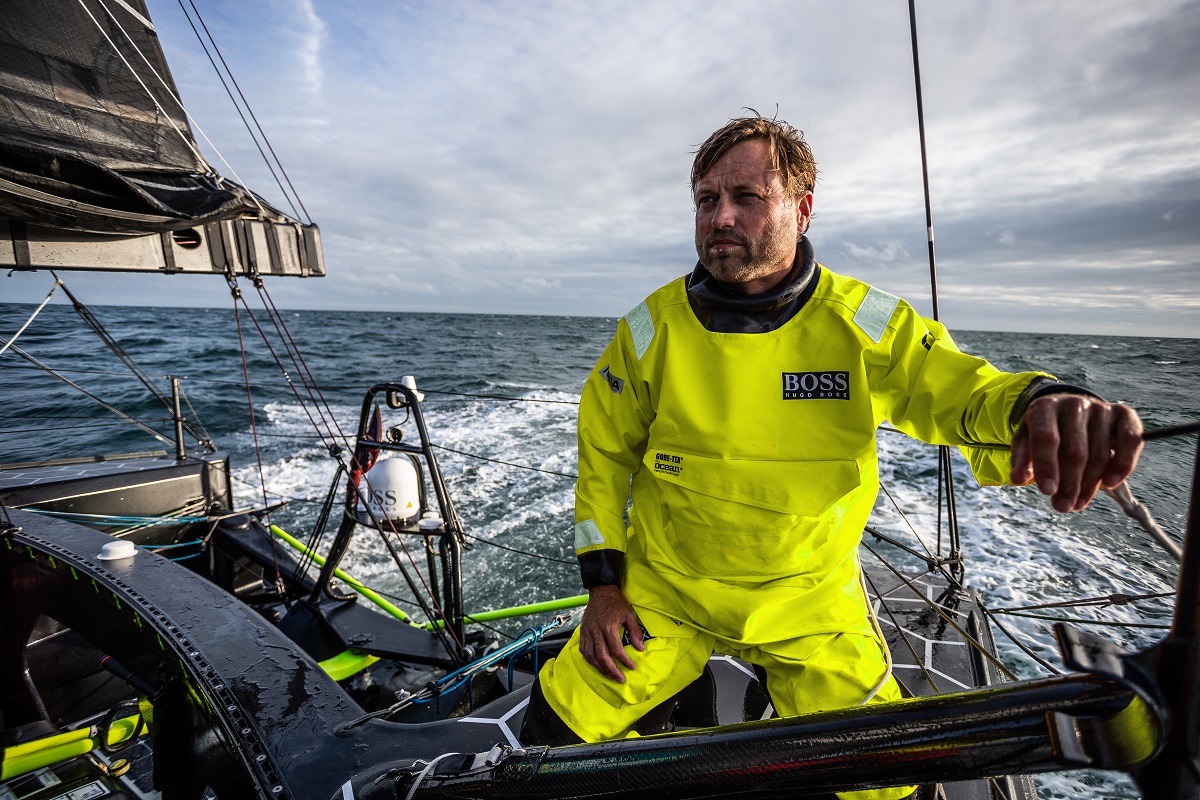 Alex Thomson will start the Route du Rhum-Destination Guadeloupe solo transatlantic race on Sunday week, armed with what he considers to be the fastest, best-optimised IMOCA 60 in the race’s record-sized fleet of 20 boats.

With Hugo Boss, he has the experience of back-to-back podium finishes in consecutive Vendee Globes, sailing’s pinnacle solo race. But still the 44-year-old British skipper is not tipped by French experts as a favourite to win this 3,542-nautical mile race from Saint Malo in Brittany to Guadeloupe in the Caribbean.

“It doesn’t bother me what the perception is in France,” a relaxed Thomson said in Saint Malo aboard his race boat.

“I have had a reputation for being a maverick, and I used to love it, but there were times when I used to hate it. Now, it doesn’t bother me. I don’t really care. At least people think I am too fast rather than too slow.”

For many years Thomson was considered the outsider in IMOCAs, a hothead racer who pushed too hard and broke too many boats. Then, in the 2016-17 Vendee Globe he pushed winner Armel Le Cleac’h all the way to the finish, despite having broken a foil less than two weeks into the 74-day contest.

As Thomson bids to win the Route du Rhum-Destination Guadeloupe at his first attempt after 15 years in the IMOCA class, his French rivals are according him plenty respect, even if the commentators of French sailing do not.

Chief among them is Jeremie Beyou, who finished third behind Thomson in the last Vendee Globe, and whose Charal is the only latest-generation foiling IMOCA to have been launched since the last race.

Just along the race dock from Thomson, Beyou, a three-time winner of the Solitaire du Figaro who was part of the Volvo Ocean Race-winning Dongfeng crew, spoke of his admiration for his British rival.

“Alex’s will be the team we are watching closest as we move towards the Vendée Globe,” Beyou said.

“I think his new boat will be a similar philosophy to mine; you need to have a quick downwind boat, but right now Alex is my closest rival. He has the money, the experience now and he is so very highly motivated to win. I think he can push the boat very hard and is fast.

“On my side, doing the Volvo was a big step because you really have to push hard; you have to remove that part of your brain that holds you back and just get on with it and push. I have definitely changed. Alex maybe had that quality already before and so maybe we are converging in our approach a bit.

“And I adore what Alex does for the class globally,” added Beyou. “He is a great ambassador for this sport of extreme solo sailing, and he puts it in front of a big global audience and that is what we want.

“As a sailor, he has matured, and is better able to regulate his pace. Before, in France, we would call him a hothead or speak about his foot which was too heavy on the gas, but in the last two Vendée Globes he has more than proved himself.”

Beyou jokes: “Solo sailing was supposed to be a French thing, but Alex is making it otherwise.”

Of the comparison between his new boat and Thomson’s program he said: “Alex’s current boat was our reference and we aimed to be a bit better than what he has. I wanted a boat that would fly earlier and be a little better upwind. But right now I am very much at the beginning with this boat – it is amazing in flat water and moderate winds.”

In what is a carefully observed technology race between two outstanding and well-resourced skippers, Beyou’s radical new boat, also from the VPLP design office, is a significant step on from the current Hugo Boss.

But Beyou chose to lead and show his hand first, with Charal launching in August some nine or 10 months earlier than Thomson’s own new boat which, although from the same designers, is being built in England.

In training and preliminary races, Charal has been shown to lift on to her foils earlier and sail at quite electrifying speeds, but Beyou’s longest training voyage so far has been his four-day, 1,200 mile qualifying passage for the Route du Rhum-Destination Guadeloupe.

While Beyou is still at the bottom of his learning curve with his new boat, Thomson knows his Hugo Boss perfectly. He contends it is significantly quicker than it was in the round the world race and he would not swap it for any other in the fleet, not even Beyou’s newest IMOCA.

“I would rather be on this boat,” said Thomson. “This is the fastest boat. If I could have any boat, I would still choose this one. We are still going fast. We are fully developed. We have not reached the end and know the reliability very well. I will be comfortable to be on this.

“I don’t know Jeremie’s boat. I can see where they are and what they have done, so I can make some reasonable guesses. We will be a little more extreme in some areas (with the new boat) I think. But we are launching a year later and there is still a long way to go.”

The strict walls of secrecy imposed within the design office mean that neither team can learn details of each other’s projects. But the Thomson group has been watching Charal’s every move:

Thomson confirms: “We have looked at Charal and looked at every video that has come out and Charal is a machine for sure. I do think it’s funny that you have the Ultimes, these giant flying multihulls lined up here and yet everyone is looking at Charal. It shows the interest in the IMCOA class and how we are moving forwards.

“We are close to being able to fly,” he continued. “The game is now to work out how to be stable. If conditions are good for Jeremie and he sails in conditions he knows then he will be very fast. But to produce a boat this new, out of the shed in August, and to be in a position to win this race, I would not be surprised if he did, but I would be tipping my hat to him.”

Elies represents a potent mix of being an excellent, fast strategic sailor who knows his boat well. Among the other key podium contenders will be 2004-5 Vendée Globe winner Vincent Riou who has shown well in training on PRB which has had foils added as part of an ongoing optimisation program by Juan Kouyoumdjian.