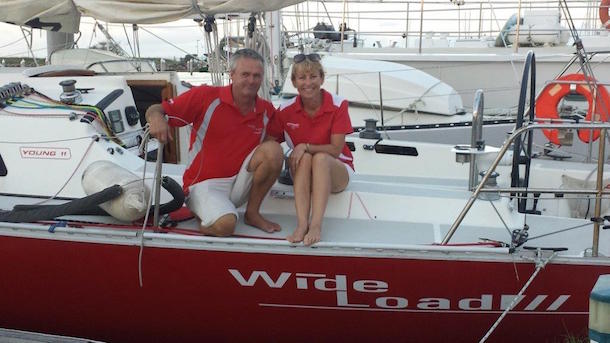 It was a Young 11 cruising-racing yacht which, because of its considerable beam, was named Wide Load.

With the 11-metre long yacht race-ready and soon to be heading north for the regatta, which starts on August 15, Elaine recently lodged their entry. By doing so, Wide Load became the 100th yacht on the impressive list of competitors for Australia’s premier offshore series.

The Noosa-based couple could be described as sailing tragics, both having been involved in the sport for most of their lives – and they still can’t get enough of it. Every Wednesday evening they can be found racing a small boat on the Noosa River, then, on weekends they sail Wide Load on the wide, open waters of Brisbane’s Moreton Bay.

Since purchasing the well-known 18-year-old Wide Load, they have added creature comforts to the interior and modified the cockpit to make her more comfortable for cruising, their ultimate aim being to compete in the Cruising Spinnaker Division at Audi Hamilton Island Race Week.

Alan Williams will be doing his fifth Race Week this year, but it wasn’t until Elaine sailed in the tropical regatta for the first time last year that the couple decided they needed a boat of their own so they could compete in 2015.

Elaine, who described Audi Hamilton Island Race Week as “the best regatta imaginable”, said that as well as enjoying racing and cruising around the Whitsunday Islands this year, they were looking forward to the coastal cruise north from Brisbane. She and Alan are convinced that Wide Load will serve them well both cruising and racing.

“We have a fun crew comprising an interesting cross-section of friends,” Elaine said. “Doug Ritchie, who hails from Canberra and lives in a castle on the banks of Lake Burley-Griffin, is certainly a colourful character. But it’s Lindsay Atherton who is causing us the most concern right now. She is an Australian working at an oil rig in Kazakhstan, which is seemingly in the middle of nowhere. The only travel opportunity she has to get back to Australia sees her arriving the day before we are due to leave Brisbane. We just hope she makes it in time.”

The list of entries for Audi Hamilton Island Race Week 2015 has continued to climb at a rapid rate, exceeding the numbers for the same period in previous years by more than ten percent. As usual, cruising yachts dominate the list with 72 already entered, while multihulls currently make up for 16 of the fleet.

All information relating to Audi Hamilton Island Race Week 2015, including the Notice of Race and Entry Form, is on the regatta website: www.hamiltonislandraceweek.com.au

Audi Australia returns as the principal sponsor of Audi Hamilton Island Race Week for an incredible tenth year.  Over the past decade of partnership, Audi and Hamilton Island have worked hand-in-hand to create the most impressive sailing regatta in Australia, with even more activities on offer for sailors and onshore guests alike. This shared vision is based on a joint passion for winning performance, technological innovation and spirited competition.