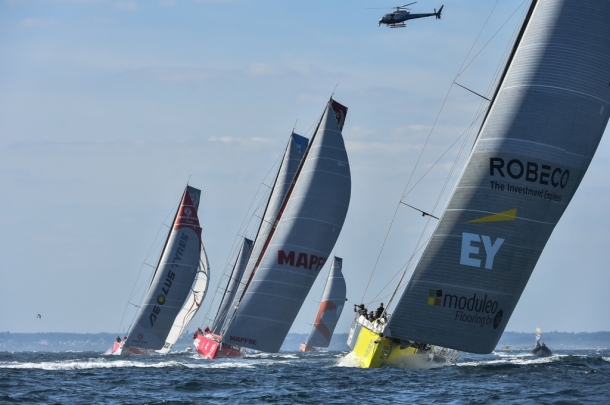 The Volvo Ocean Race fleet set off for Gothenburg, 960 nautical miles away from Lorient, via The Hague, in perfect sailing conditions today with Team Brunel (Bouwe Bekking/NED) leading the chase to reach the Dutch pit stop first.

There was drama from the very first seconds with Leg 8 winners, Team SCA (Sam Davies/GBR), and Team Alvimedica (Charlie Enright/USA) both finding themselves on the wrong side of the line at the start and were forced back to cross for a second time.

Bouwe Bekking, in contrast, stormed away to the perfect start and was still narrowly ahead as he led the fleet out of a packed Lorient with all six boats in hot pursuit after five laps around the port.

Team Brunel, like three other boats, have podium positions to sail for in this final leg to Sweden after more than eight months at sea, despite Abu Dhabi Ocean Racing (Ian Walker/GBR) already having the overall title virtually sewn up with an unassailable eight-point lead.

The Dutch boat is currently in second place on 27 points after eight legs, two clear of Dongfeng Race Team (Charles Caudrelier), and four ahead of MAPFRE (Iker Martínez/ESP).

All have the chance of finishing in second if the last leg results go their way and even fifth-placed Team Alvimedica (Charlie Enright/USA) on 33 points could sneak in to grab the runners-up spot if they end up as leg winners and their rivals finish down the field.

Both Team SCA and Team Vestas Wind, first and second from Lisbon into Lorient last week, will be determined to put a spoke in all their wheels and repeat the previous stage’s somewhat surprising finish.

As Ian Walker put it, meanwhile, his tactics on board Abu Dhabi Ocean Racing are pretty simple on a stage which is full of exclusion zones, avoiding a busy shipping route skirted by rocks: “Don’t hit any rocks and avoid breaking any rules.”

Bekking would like nothing better than be first to reach The Hague in his home country, probably on Friday, a belated birthday present as he turns 52 years old tomorrow (June 17).

“We have no strategy as such but, of course, we’re going to keep an eye on the guys. It will be massive to go home (The Hague) but we know it’s just a stop and it’s all about the finish in Gothenburg.”

“There are lots of rocks involved, and our first priority is not to hit the rocks.

“There’s going to be lot of current, but it’s difficult to know where the key of the leg is going to be. We could arrive in Scheveningen and then the whole thing starts again. The best thing is to be in front in any case.”

Charlie Enright of Team Alvimedica agreed, adding: “We are in a really complicated situation – but at least we know it’s complicated.”

The boats will be precisely timed as they pass the interim line in Scheveningen, near The Hague, on Friday. No points will be awarded for how they finish there.

From 1200 local time onwards the following day, they will depart for Gothenburg with whatever advantage or deficit they took into the pit stop on their rivals.

They are expected to arrive in Gothenburg on Monday (June 22), or, possibly the following day.

The nine-month, 38,739nm, marathon event will finally come to a halt in the famous maritime Swedish city on Saturday, June 27, with the Inmarsat In-Port Race Gothenburg.

The Volvo Ocean Race 2014-15’s final, deciding leg from Lorient, France, to Gothenburg, via a pit stop in The Hague, which starts later today, can now be followed every minute of the way from your pocket thanks to the ground-breaking Tracker.

The ever-popular Tracker, which is available on all the race’s digital platforms, is normally updated periodically via technology provided through Race partners Inmarsat and Cobham from the boats to Race Control in Alicante, Spain.

With so much at stake in the 960-nautical mile (nm) final stage leading up to the finish of the offshore stages in Gothenburg at the start of next week (June 22), the Volvo Ocean Race has upgraded the service so that fans are always up to speed on the very latest progress of their favourite team.

A woman has been seriously injured and is currently receiving treatment at the hospital in Lorient.

We are concerned about her wellbeing and remain in close contact with the Lorient stopover organisation and local authorities. We will give you more information as soon as we have it.