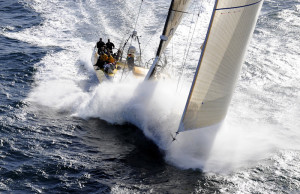 Wicklow Sailing Club, in association with the Royal Ocean Racing Club and Royal Irish Yacht Club, gives notice that the 2016 Round Ireland Yacht Race is scheduled to start from Wicklow Bay at 14:00 hrs on Saturday 18th June 2016.

The Round Ireland is a biennial 704 mile circumnavigation of the island of Ireland, starting and finishing in Wicklow. The 2016 race will be the 19th of the series, with the first race having been sailed in 1980.

The race provides spectacular scenery around the coastline of Ireland. There is a series of challenging tidal gates and varying sea conditions. Finally, there is the massive welcome home at Wicklow Sailing Club.

The Preliminary Notice of Race is attached; enquiries have already been received at the race office from interested boat owners.

The Royal Ocean Racing Club has confirmed that the race will continue to merit bonus points (1.4) for participants and the Royal Irish Yacht Club will once again provide a base for those boats who wish to use Dun Laoghaire as a base.

In 2014, the overall winner was Tanit (Richard Harris and team from Glasgow), while line honours went to Monster Project (Andy Budgen and local WSC sailor David Ryan). The overall record of 2 days 17 hours 48 minutes 47 seconds is held by Mike Slade in ICAP Leopard 3 achieved in 2008.

The race officially opens for entries in January 2016 but please don’t hesitate to register your interest at the email address below.