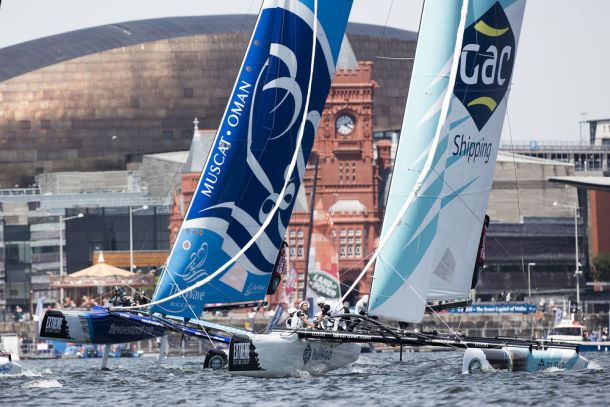 Ten exhausting and fast-paced, short, sharp, sprint races were the order of the day on the first of four days of racing at the Extreme Sailing Series Act 4, Cardiff presented by Land Rover. The eight international elite level Extreme 40 teams were put to the test on a typically tricky Cardiff racecourse, contending with 40-degree shifts and gusts from 10 to 23 knots.

Winning the day with an 11-point lead at the close of play, The Wave, Muscat didn’t exactly have it all their own way. A collision in the third race at the windward mark with SAP Extreme Sailing Team resulted in serious damage to their tiller bar. Despite the terrific crunch of cracking carbon, fortunately none of the crew were hurt, but with the damage irreparable on the water, the team limped back to the pit lane for repairs. Five races later, The Wave, Muscat took it in their stride and came back fighting, with two wins and a third in the final three races of the day – the defending Cardiff champions top of the overnight leaderboard with redress on 90 points.

Back on dry land after a rollercoaster day, British Olympian Leigh McMillan explained: “We had a manic repair trying to get our broken tiller fixed, it was quite technical and difficult trying to get the rudders back on in a fashion where they are actually going to steer the boat.”

Once back out on the water the pressure was on for pre-season favorites to perform. “We really needed to nail it because the average points were going to make a massive difference to the overall scores and if we had a few bad races it really could have ruined our day. It was quite tricky to get into the rhythm, but we managed to come out on top… just.”

Eleven points behind The Wave Muscat in second place, Oman Air had an outstanding day, consistently hitting the podium in eight out of the ten races – the predominantly British crew lead by Olympian Stevie Morrison are on course for their first podium finish of the season. “It was such a long day, but we kept consistent apart from the last couple of races which were quite frustrating; we made some sloppy mistakes, probably from tiredness, but we are happy enough,” explained Morrison. “The Wave, Muscat have taken the lead with their average points, but it doesn’t really matter to us this early on; we just put that down to age and experience.”

Despite their chilled out approach the Oman Air boys will have to work hard to stay ahead of the game, with current overall Series leaders SAP Extreme Sailing Team just two points adrift on 77 and rounding off the overnight. The fastest boat on the water and sailing the shortest course according to SAP Analytics, the Danish team had a shaky start to the day, but five races in the team finally clicked in to gear, finishing the day with five podium results. Delve into the stats from the day with the SAP analytics here.

The final word of the day comes from British Olympian Chris Draper, who returns to the fleet as co-skipper onboard GAC Pindar after a three year absence: “It was glamour sailing and really good fun; it was perfect, it couldn’t really have been any better. You could push the boats as hard as you can, and there were a few moments where we had to back off which is always exciting. The boats are still awesome to sail, but it’s seriously hard work.”

Racing continues tomorrow from 14.00 BST with live video and race commentary from 15.30 BST at www.extremesailingseries.com/live