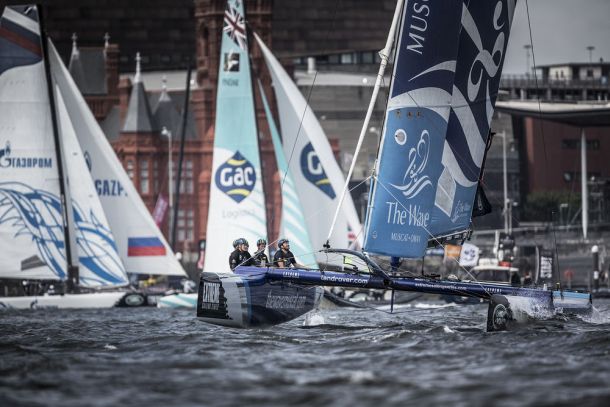 Cardiff turned on breeze, blue skies and beautiful conditions for racing today treating the spectators lining the Welsh shore to Stadium Racing at its best. Despite a number of minor damage delays interrupting the flow, the eight elite level Extreme 40 teams completed seven tough but satisfying races, sorting the men from the boys. Rising to the top with four race wins and two podiums finishes out of a possible seven, The Wave, Muscat were unstoppable and dominated the day, allowing Leigh McMillan and his experienced crew to significantly extend their lead at the top of the overnight leaderboard to 153 points.

“It has been pretty relentless over the last two days and I think we have the same to come with these strong reaching conditions from the West,” explained McMillan. “For us it was important to keep focused, which was quite a challenge race after race, but it was a great effort from the whole team making sure we kept pushing forward and trying to get those race wins and pushing as hard as we can the whole way through.”

Current overall 2015 Extreme Sailing Series leaders SAP Extreme Sailing Team had an inconsistent day, at times just on the edge of control in the testing conditions. Despite that, the team managed to add 55 points to their score line by the end of the day, enough to gain a place in the overall ranking but still 21 points adrift of first place. Like many teams, tonight’s debrief will be all eyes on The Wave, Muscat using the SAP Sailing Analytics to decipher just where the Omani team found their consistency.

However the day belonged to British Olympian and Series veteran Chris Draper and the crew on board GAC Pindar. Draper’s influence on the team in today’s testing conditions was clear: in control when other more experienced teams were visibly battling with their Extreme 40s. Draper explained: “It was absolute glamour sailing, it was full noise on the boats, and you are kind of nursing them round but pressing them when you have to. I don’t think we had as many hairy moments as we did yesterday but everybody was still quite cautious, but you had to be because you could really get yourself into a pickle if you did something radical!”

Co-skippers Draper and eight times 18-foot Skiff World Champion Seve Jarvin finished the day with four podium results and their first Act race win, moving themselves on to the podium in third on 128 points.

Leading the chasing pack and holding onto fourth place, Red Bull Sailing Team’s Hans Peter Steinacher summed up the day: “The sailing is absolutely amazing, we love the breeze but it is also hard with the number of boats on this small course. The start is everything.” The Oman Air boys struggled to find their rhythm, physically blown out from the previous days racing, dropping off the podium to fifth after a challenging day.

With more of the same predicted for the next two days the teams will need to dig deep to keep their performance high throughout the final days of glamour racing in Cardiff Bay as the free to enter Race Village gets into full swing over the weekend.