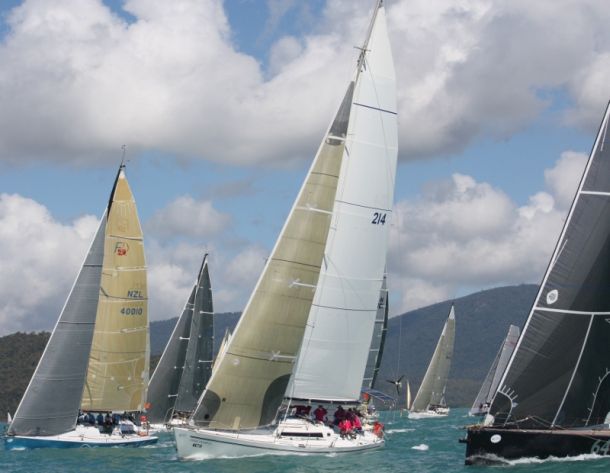 A good reputation and building fleet numbers has drawn Leigh Dorrington and his team of southern sailors north to the SeaLink Magnetic Island Race Week, being held from August 27 to September 1.

The Dorrington-skippered Davidson 52 Prime Example is the 19th entry in the Cruising with Spinnaker Division in 9th year of the annual regatta.

“I spoke to a number of people who competed at Magnetic Island last year and they just told me how good it was, how relaxed it was although they were still racing was hard. It’s got a good reputation and it’s building as far as fleet numbers go. The future is looking very good for Magnetic Island. I think you will find more people will be doing the twin regattas, like either Airlie and Maggie or Hammo and Maggie,” Dorrington said.

Joining Prime Example in the Cruising with Spinnaker Division are another seven inter-state boats to compliment the strong local contingent.

Royal Yacht Club of Tasmania entry, the luxurious Buizen 52 Infinity, will be a challenger to Prime Example on the line honours, but the Royal Prince Alfred Yacht Club entry L’Esprit, Peter Byford’s Jeanneau 469, is set to be their greatest challenge on handicap, if the handicapper doesn’t get to them too early.

Byford will be returning for his third consecutive race week. They finished third in Division 1 last year after winning their division at Hamilton Island. In April this year Byford won Performance Cruising Division 1 at the Sail Port Stephens Regatta.  “We have done well, but unfortunately I think Denis (Thompson) will catch up with us. We are still going up to have good fun,” Byford said.

Byford agrees with Dorrington that the Magnetic Island Race Week is growing in status and numbers. “A couple of people from my club recommended the event. We haven’t regretted the decision. It makes a nice contrast to Hammo. They are both good in their ways. The sailing at Magnetic Island is good and it’s a bit more social, more laid-back,” Byford added. But when it comes to racing, Byford plans to be up there, having a go at the bigger boats.

Dorrington has a reputation for driving his boats hard with his formative sailing years spent successfully competing in national and international events. The crew will be a mix of women and men from various locations around Australia along with owner Ray Semmens, who is based on the Mornington Peninsular, and Dorrington who is based in Sydney.  “We all blend in well and have a lot of fun. We take the racing seriously, but we also take the social side seriously. It’s a good balance.”

Prime Example has been set up to go cruising, but can easily be converted to be race-ready. “Ray has spent a lot of money getting the boat set up to race, with new sails and other gear. We are very fortunate with the boat having a furling headsail and radar which we can then remove and the put the boat in race mode.”

This year they will do the Hamilton Race Week and then head up to the Magnetic Island Race Week before cruising to Lizard and beyond. “We will probably get into Cooktown if we can as there is a museum there I want to visit.”

Preparations for the Middle Harbour Yacht Club based boat, before heading north, started back in March with the Sydney Harbour Regatta and have continued through to the Cruising Yacht Club of Australia’s Sunday winter series where they are getting plenty of practice in racing in a large fleet. At the end of the July the Prime Example team will start the trek north, contesting the Sydney Gold Coast Race.

Entrants are reminded that entries received by June 30 will receive three tickets in the draw to win two flights to Townsville and seven nights accommodation in a two-bedroom apartment in the stunning, five-star Peppers Blue on Blue Resort on Magnetic Island for next year’s 10th Magnetic Island Race Week.

Registrations are open online at ww.magneticislandraceweek.com.au  for the 9th Magnetic Island Race Week.