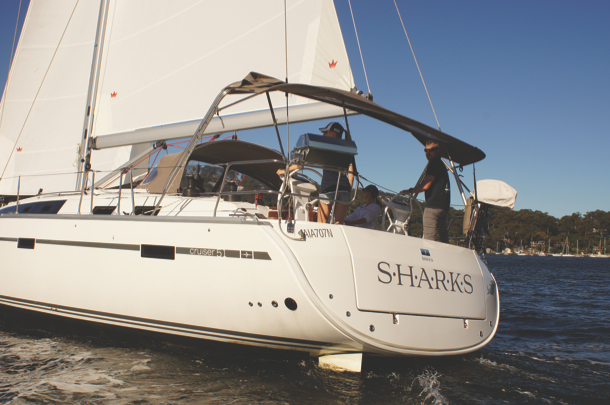 Unsure if it is my imagination but there appears to be a schism appearing in the new boat market.

Increasingly, boats are appearing under the 40 foot size and over 55 foot. I wonder if this is true or is it just me?

Certainly I have been doing a lot of testing lately of boats over the fifty foot range and the latest offering from Bavaria, the Cruiser 51, is aimed squarely at the Cruising Helmsman readership.

Given most cruising yachts are populated by husband/wife teams, how can it be they seriously contemplate buying a large craft such as a 51 and head offshore?

The answer is: electronics.

Bow and stern thrusters, electric winches, self-tacking sails; the list goes on. Older couples can go short handed with a little planning and preparation with enough room for a comfortable lifestyle and the ability
to invite friends to enjoy the comfort as well.

One intrepid yachtie has decided to make a statement with his planned cruise and raise funds for charity while sailing around Australia in a Cruiser 51.

Back in 2012, an Australian, mourning the loss of his wife to breast cancer, resolved to make something positive from his pain.

Jacques Stap took a motorbike and rode around Australia raising money and awareness for the Breast Cancer Network Australia. “People are so hospitable and welcoming, right around Australia,” Stap says.

The 2012 trip was life-affirming for Stap that now, three years later, he is keen to do it again. But this time by boat. Now with new partner Leanne, he wants to use the opportunity in retirement to circumnavigate the continent raising money for various charities and helping those communities in need.

Both Jacques and Leanne are registered nurses. “In a year and a half we want to retire and sail around,” he says.

“I am a member of the Shag Islet Cruising Yacht Club so one of the charities I am hoping to promote and raise money for is prostate cancer.”

Once this decision was made it was time to look at what type of boat to buy.

The pair settled on Bavaria as their yacht of choice and began to trial the range available from Ensign Yacht Brokers, “we were looking at the Vision 42 first, but after sailing the 51 it was incredible,”said Stap.

“It has such a presence on the water.”

The decision became easier when they started to plan what they would need on the boat to take it all the way around the country.

Since there will be only two of them, Jacques has opted also for the Bavaria bow and stern thrusters to assist in manoeuvring. He also requested a watermaker be added. Keeping cool in tropical waters, was also a concern, especially in such a big boat. Once they added air conditioning to the options then the power drain instigated the inclusion of a gen set with solar panel backup as well.

With all those added requirements Jacques and Leanne knew they needed the bigger boat to handle it.

They are happy with their choice. “We were sailing outside Sydney Heads in just ten to fifteen knots, very enjoyable,” Stap recounts. “When we went back through the Heads we got hit with 25 to 30 knots. She just kept tracking nicely under control, steady as she goes!”

“As a larger yacht I thought it would be more difficult to sail but I was wrong.”

Not so perfect day

Boat test day was another typical Pittwater winter. Sun pushed through low lying cloud but the wind refused to turn up.

We could only test in the conditions afforded to us. But given the constraints we still managed to get some photos and have a good poke around.

Very light winds made proper testing difficult but with a Farr designed hull and twin rudders it is safe to assume this baby will slip through the miles very graciously. Although it is a big-bellied cruising yacht (it is even designated the title ‘Cruiser’ by Bavaria just to ensure you are aware of its purpose) its displacement to length ratio and sail area to displacement ratio belies a bit of an ocean racing thoroughbred.

It is the heaviest 50 footer I have tested but it counters this with the largest sail area. Once you get this baby moving it will carry. Hopefully enough to stave off having to use the engine.

In keeping with Farr Design thinking this hull does not have the hard chine seen on most European designs nowadays. There is a nice rounded bow section sloping down to a laterally-wide keel that, while shorter than other 50 footers tested, has a bulb that provides a ballast ratio over 30 per cent.

The aft sections rise quite sharply but are, again, well rounded for smooth upwind tracking and a nice roll downwind.

The transom ratio to beam max is about 86 per cent, this is one of the lower numbers for boats this size that I have tested, yet it is one of the beamiest in its class.

As you would expect, down below on a 51 footer is expansive, so too is the cockpit. So big there is even full bench seating behind the twin wheels without encroaching on the skipper’s space.

A gentle sloping cabin aft bulkhead gives a nice resting place. Such is the length of the cockpit when someone is stretched out there is still room for people to sit.

The side-drop cockpit table allows easy access between companionway and stern section. The steering stations are well outboard but not too far to squeeze the helmsperson outboard. Winches are well positioned along with the electronic buttons for tacking.

The rig is 6/7ths, this leaves enough room at the masthead to keep any spinnaker from tangling with the headstay. Spreaders are swept, but the chainplates are just inboard of the rail.

Seating for seven around the saloon table which can fold out to accommodate full dinner or fold-away for cocktail and cruising time. It dominates the cabin but does not encroach on movement.

Galley is a long U-configuration to port, giving easy access to the saloon and walk through to the forecabins. Plenty of storage space and access to the top and side of the refrigeration unit.

The navigation station is aft of the galley facing forward, this allows the table to provide more bench space for the galley. The nav seat comfortably fits two. While I like this double usage of the table it sits overlapping the galley bench with a nuisance unreachable gap underneath that will be a haven for crumbs and all manner of usual galley detritus. I do like a nav station facing forward however.

While the main cabin area is large enough it does appear to be quite small when compared to other boats this size. This may be due to the bulkhead forward of the mast that leads to the two forecabins. The main berth cabin is huge with the ability to walk alongside the queen size raised bed.

The suite includes an en-suite private head (a separate shower cubicle is to port in the three-berth version), a walk-in closet to starboard and a separate desk. To port aft of that is the fourth cabin that consists of a top and bottom bunk for singles, children or crew. The three cabin version does not include the bunk cabin and this must make the main cabin even more massive!

The starboard side head has plenty of room for both the shower and the toilet, both with good elbow room.

While our review boat has the four cabin layout: three queen-sized doubles plus the bunk cabin, there are three interior versions: three, four and five cabins.

The way they fit five cabins into the interior layout is an optional Bavaria design feature they term the ‘Flexschott system’. This system transforms the owner’s forepeak cabin from the single owners bed into a two cabin version.

This appears to be a trend in latest designs. The fact they can convert one cabin into two double berth cabins gives you an impression of just how big is the single forepeak cabin.

There are three heads for every interior layout version. The two quarter cabins aft use the two heads forward, alongside the companionway. The starboard one includes the shower.

As would be expected there is lots of locker space in the cabins.

I was surprised, however, that there was not more hanging space for such a large yacht.

Plenty of room in the heads with access to all seacocks. Through-hull fittings are high grade plastic.

The engine is a 55 kilowatt Volvo that is more than adequate. As you would expect in a boat this size, batteries and engine access is excellent as well as plenty of space for extra batteries, generator or a watermaker.

Yes, big boats are big. A daunting prospect for short handed sailing. But, as Jacques and Leanne discovered, if you want to tackle those out of the way places and you are no longer the young, fit, resilient youths of yesteryear, then an optimised large yacht is an excellent option.

The Cruiser 51 not only gives the size and capability it is also set up to take these two on a most excellent adventure.

Want to read all the latest in boat tests and reviews? Subscribe here