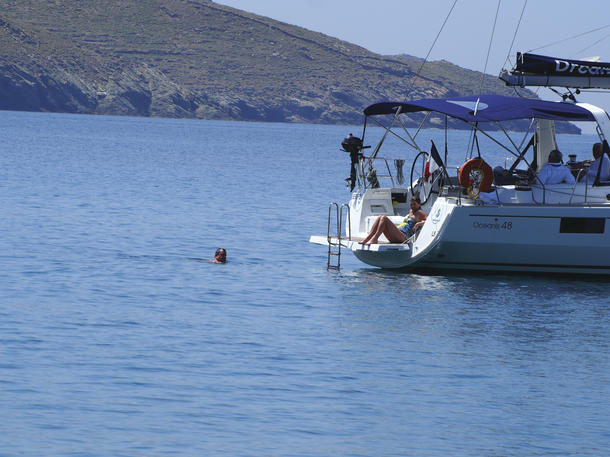 Many Australian ‘yachties’ dream of sailing in the Med; inky blue, clean warm sea, stark white cubist houses perched precipitously on steep escarpments and a grilled octopus with a salad set on a blue table in a simple tavern.

The dream is achievable but a little preparation will go a long way to ensuring the realisation of that dream.

The climate in the eastern Mediterranean is known for long dry summers with low humidity and temperatures in the 20 to 30 degree range between April and November. Outside of that period, however there are many bright, clear, cool dry days with light breezes rippling across flat seas. The islands and shores of most of the Mediterranean are devoid of vegetation for a reason; annual rainfall is typically in the 250 millilitre range or less.

Winds in the summer are a little all or nothing; that is a fact. You really need the time to be in a position to sail when the breeze is on but few of us can afford that luxury.

The notorious wind is called the Meltemi in Greece and Turkey, a northerly that results from the interface between the Azores high and the tropical low over Pakistan, both of which are relatively stationary during the summer months. A Meltemi can descend as a line on the water with very little or no warning; no clouds, no temperature change, just a sudden increase in wind strength typically up to 30 plus knots.

On one occasion as I was crossing the Ionian Sea in Greece the sea was flat, we had lunch on the table and a cool glass of Chablis to enhance the moment. I was in company with five other yachts when I received a call from my friend Efthimis, operator of the charter base in Athens. “Trevor, there is a Meltemi coming your way, be prepared”. I looked up to the northern horizon and sure enough there was the thin dark line. Lunch was quickly terminated, we part-furled the main and the genoa and within ten minutes we were scooting along at better than eight knots with 20 knots of wind on the beam.

An hour later the wind had veered so that it was on the nose and we had a tough work to our final destination. That trip was two weeks duration and for the rest of the time the wind was typically light in the morning and up to 15 knots during the afternoon until about 5.00pm when it would drop further. Evenings are typically balmy and calm.

The tidal movement in all of the Mediterranean is negligible and the only real movement of the surface water is when there are long periods of strong wind from any given direction. There might be a current between two headlands for example between Evia and mainland Greece,
but in general it is possible to plan a trip without any consideration for the current.

Unlike tropical waters there are very few reefs and rocks to hit in the Med but it is not uncommon for an isolated lump to jump up. So it is necessary to keep a watch when passage making.

This is particularly so in the Tyrrhenian Sea. There are traps for young players in Sardinia and Corsica in particular and navigation using paper charts is recommended. It is also advisable to stay well clear of the coastline at all times.

The best months for sailing in the Med are late April, May, June, early July, September, October and even November in Turkey. The key to success though is voyage planning; it is infinitely preferable to be going with the wind because when the wind does build the seas have a short interval and a steep uncomfortable pattern.

Having said that it is rare for me to see water on the deck when I am sailing in the Med on the yacht rallies I run through the season. In fact the yachts need repeated hosing down when we can get the water because of the salt. The salinity of the Med is typically 10,000 parts per million higher than the Pacific. Which becomes obvious after the first dive into the water with the yacht stationary on a sheet of glass. You will suddenly find yourself to be more buoyant and can float comfortably without any paddling.

That is a must do by the way; on a day while motoring with no wind it is very satisfying to stop the boat and jump. The deep water wraps around, bubbles rise to the surface and looking back up into the sunlight is a beautiful experience. For safety have someone on board of course.

There are few sharks in the Med. I have seen a picture of one and have actually seen one live, about a metre and a half long with a small innocent dorsal fin and tail tracking in lazy arcs across a calm sea surface.

Keep an eye out though for the Medusa jellyfish, which seems to show up on hot still days. This jellyfish is small, pink and almost translucent. It has a sting but it is not dangerous. Usually a wash in fresh water and an application of a cool sting treatment is all that is needed.

The other painful hazard is the spikey sea urchin on rocks or concrete quays: black and with spines which break off and are almost impossible to remove. The wounds often become infected and require medical assistance. Lemon juice squeezed onto the spines may dissolve them or urine is the less, undesirable, solution. Otherwise the Med is free of nasties.

Australians are generally insatiable in their search for splendid isolation but anchoring in bays overnight has to be undertaken with caution.

In many places the holding is not great. Rocks and sea grasses do not allow the anchor to set. The wind will invariably cycle through the night so that someone has to get up and reset the anchor.

Personally I prefer being tied to cement, which requires use of the reverse parking technique. This technique requires a little preparation; fenders over the side, anchor hanging over the bow ready to drop and two lines on the stern ready to secure the boat to the quay.

This can be tricky in a cross wind but the secret is that you do not have to get it right the first time. Basically it is necessary to plan for the anchor chain to be run out something like five times the depth of the water.

Ideally drop first, making sure that the chain has not crossed another and then start to reverse towards the chosen spot on the quay. Remember that the rudder will not work if the boat is not moving and there has to be someone on the bow to ease the chain as the boat moves. The weight of the chain can hold the bow in a cross breeze but it is important not to stop the boat because then the steerage is lost.

The gap between two already anchored boats may seem very small at first but you have to be bold; keep moving. Remember no speed no steerage.

Then run the boarding gangway to the shore making sure that if there is any surge you have enough room for the boat to move. Personally I prefer to bring my plank onto the boat at night and ease the mooring lines against a little more pressure on the anchor chain. Then you will be less likely to have unwelcome four-legged visitors on your yacht; for that matter even two legged ones!

There is a variation on the reverse parking theme, which involves picking up a lazy line that connects a mooring to the shore. The anchor is declared redundant and stays in the locker.

When manoeuvring in close quarters it pays to keep a sharp eye for the occasional floating line and if the propeller does foul go to neutral as quickly as possible. The same can happen with bow thrusters; overuse can draw the lazy line into the thruster tube and once again the power should be turned off immediately.

On the security question I have been sailing in the Med since 1975 and have never locked a boat as far as I can remember; neither have I ever had anything stolen.

I usually close the hatch and leave a light on to give the impression someone is on board. I do not know whether that is because I am lazy or trusting, but the fact is that if someone wants to get into your boat they will, even if you close all the hatches.

On the quays there is a steady stream of people passing by and other yacht owners coming and going which also acts as security.

Soak up the atmosphere

Once secure it is then important to bring that Chablis out I referred to earlier, sit quietly in the cockpit and survey the scene across the quay.

The waterfront will be lined with restaurants, old men will be looking at you from under their peaked caps and the ubiquitous cloud of smoke. Kids will ride their bicycles along the quay and then the chatter will start with your neighbours.

After dinner take a stroll to a vantage point and survey the scene, even take a photograph. People do not seem to need the material trappings we are accustomed to but they have a quality of life that modern day political upheaval cannot dislodge.

As you sail from island to island you realise that each island and each village is different: proud, independent and maybe even disdainful of the world at large. These people are, however, welcoming and observant. Helpful in situations where help is needed and a wealth of local information. It is rewarding to take the time to talk to people and hear their stories.

Most if not all Mediterranean ports have an abundance of the small food shops: bakery, patisserie, delicatessen and grocery; so provisioning is easy. There is not much on the barbecue scene though, because in many places red meat does not have a high profile. Very few charter yachts are fitted with BBQs anyway so shelve that part of Australian culture.

Absent also almost everywhere is ice and if there is anyone out there with an entrepreneurial disposition there is an opportunity to start up an ice-vending business using the same business model as the ice cream makers! The local bar is the best place to ask for ice and many of the supermarkets on the shore are now providing bagged ice.

Exploring the Mediterranean is exciting and rewarding. The waters, islands, topography, cultures, buildings, people vary between Turkey, Greece, Italy, Croatia etc., but the experience of being on a yacht, tied to the village quay with access to the local life is full of surprises and can be life changing.

With the advantage of taking time to enjoy all that a magical bay or a favourite village has to offer the yachting option is a perfect way for the world traveller to journey.