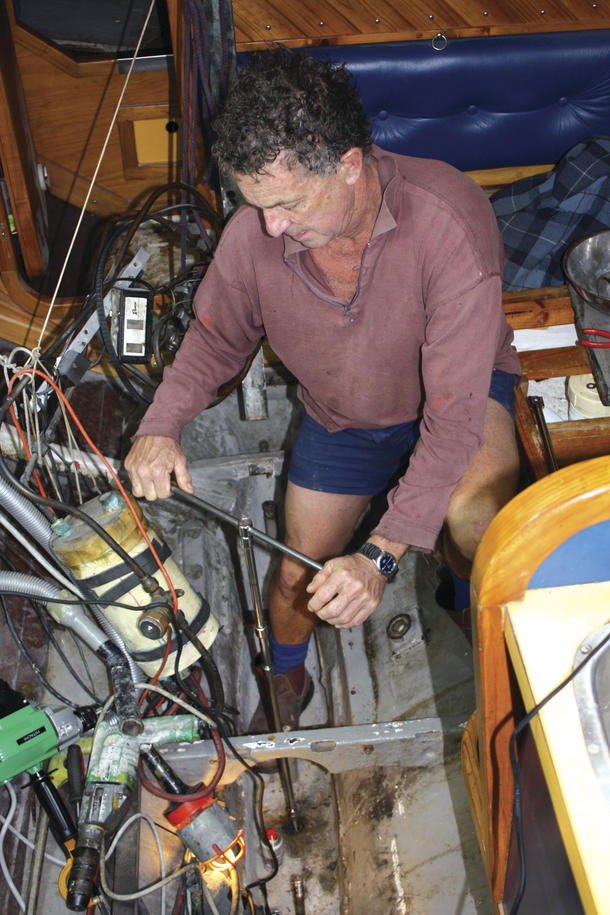 So we have done “the season” up north and it is time to ponder and look back at what worked and what did not. We are nearly back home in Port Lincoln and did not make it to the Louisiades as planned for various reasons.

We cruised the Coral Coast last year and cheated by freighting our yacht up and back ($14,000) but have sailed up before. Our 30 foot Endeavour had a refit ($40k at least) from new keelbolts to masthead tri-colour prior to the trip. I used the equipment list from Jessica Watkins book ‘True spirit’ as a guide.

I had to make judgements about what to take, what we could afford and what we would leave at home.
So here is the list which may be of interest to those planning a similar trip.

We emailed friends and family with various dates and places they could join us and had over 20 guests which was typical of many boats. Most were ‘fly-in/fly-out’ (fi-fo) as they flew into, say, Mooloolaba and flew out of Gladstone. My wife Beth and I sailed the boat back to Brisbane by ourselves.

Because of the constant guests we did not get on top of the list of jobs that need doing. This was despite the refit where everything possible was new or rebuilt. Maintenance is an everyday chore.

At 30’ we were one of the smallest boats travelling, but the old wine glass-shaped hull is sturdy and sea kindly. It is also manageable physically and financially. The older designs can carry the gear required for longer cruises and behave better at anchor.

Our new 22 kilowatt (30 horsepower) diesel engine ($10k) was brilliant. Did not even have a fuel line connecting the engine to the fuel tank for six months! Sounds impossible but it sucked enough through an overflow to work.

Similarly, a feathering three-bladed Australian made stainless steel propeller ($3k) improved our sailing speed, but is not good in reverse.

We did not however, use the new outboard ($700) for the dinghy. Reliable enough but easier to row the foredeck-hugging, homemade dinghy.

Nor did we use the wheels specially fabricated for the transom of the dinghy so that it can be dragged up beaches or boat ramps.

Going ashore in Queensland often involves mud so we used marinas to restock and explore.

Yes, we had enough money, most normal (retired wage earners) have a budget of $50k to $100k/year and we spent about $70k. We returned home several times, ate out lots and were in marinas far more than intended, costing from$105 maximum to $8 minimum/night. Oddly enough the cheapest was the best.

We did not need the two large 160 amp batteries ($500 each), one would have been adequate. Especially when backed up by the little ‘gopher’ battery ($39) which held charge all year.

Another useful item included our Ipad ($500 + $185/year), with a cheap navigation download. It was brilliant for navigation and searching the internet to research ports and services at sea prior to entry. However, the Ipad does not replace a laptop computer which was sorely missed most days!

Speaking of electronics, having each individual electrical item on a separate circuit, fused and with no integration of any instruments, worked well. Not the current fashion, I know. What we did not use was the bracket made to put them in the cockpit.

The new mainsail and number two jib ($3k) were used almost exclusively. We reefed down once, used #3 jib and downwind spinnaker once. We do not have lazy jacks, mainsail bag or furlers, but had sails either bagged or covered at all times when not in use. We use the motor, trim sails and always have a clean bottom so that five knots is maintained at sea. We did not ever use the #1 jib, #4 jib, trysail or reaching spinnaker.

The deck shade ($300), from the mast to the stern, was used when not sailing but the foredeck cover was not used much. A personal umbrella ($9) was used in the cockpit and was handy ashore. We do not have a bimini or a cockpit arch with solar panels and all that other junk sometimes appropriately called “the back verandah.”

The spray dodger ($400) sheltering the cockpit, however, was used more at anchorage than at sea as the wind was nearly always behind us on this trip.

As for the toilet holding tank ($650), what a complicated useless thing when there are no pump out stations.

We bought most of the Australian charts from USA ($300) at about 1/10 of the price here in Australia. Beth liked the coloured Australian charts we had on board but I did not mind the imported ones. Contemplated going paperless but feel more comfortable studying a chart the night before a passage.

Did not use the small desalinator ($3000) because the water was often too dirty in much of Queensland. When we could use the desalinator it was great not to have to be closely monitoring our water use. Our home made eutectic fridge was run twice per day for about ten minutes at the same time as the desalinator.

The 30 kilogram plough anchor with 60m of 3/8 stainless chain ($1250) never dragged. Although the electric winch on the foredeck ($2k) never let us down, it needs to be able to pull up the anchor in more than 12m of water.

Oddly enough we did not use the other heavy anchoring gear we use in more southern waters, including 40kg. fisherman’s or 25kg. Danforth anchor. Nor all the new long nylon rodes for each anchor. The sea anchor fortunately remains in its locker.

What did work was the 150m. long rope to pull the boat over by the masthead when grounded. The worst was when I was not paying attention in the Sandy Straits and then I was paralysed by all the alarms going off prior to hitting a bank at full speed on a falling tide. She was not impressed!

Our two folding bikes ($400 each) were great for exploring, restocking and exercise. Similarly the two inflatable kayaks ($1k each) were used up rivers and estuaries far away from where we were anchored.

The home made windvane did nearly all the sailing and the autopilot was used for motoring, we just slept, read and probably did not keep as good a look out as we should have.

What definitely worked was the collection of memories and great experiences, especially when shared with friends and family. Given all that, it did not convince Beth nor myself that this is the way to live full time.

What works for us is cruising on a part time basis and using the boat as a base to explore. Anything else and I could see myself becoming a lonely, sad, grumpy old man in a marina somewhere in Queensland if I continued.