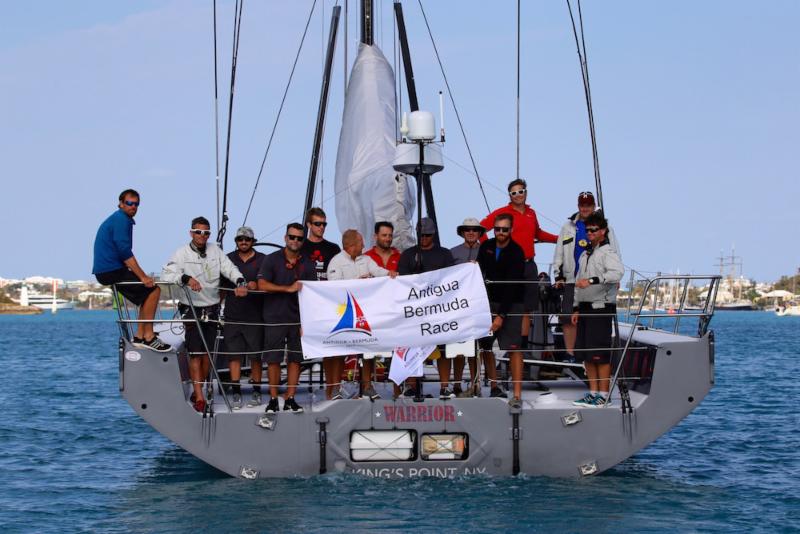 Warrior is operated by the non-profit US Merchant Marine Academy Foundation for the benefit of the Warrior Sailing Program, which helps wounded veterans to maximize their potential through the sport of sailing.

“It was a great ride,” smiled skipper Stephen Murray Jr. “Will (Oxley) did a great job of hooking us into the pressure between the two highs and the weather scenario now looks hard for the other guys. This has been an unbelievable experience. I have been waiting to get offshore with this boat since we got her and we want to do a lot more. I knew she was fast, but I had no idea how fast. We are staying in Bermuda for the week and we hope to see some of the America's Cup boats while we are here. Now we have finished, I must say Happy Mother's Day to my wife, even if it is two days late and thanks Dad; I wish you could be here with me.”

“I have no doubt that the record will be beaten in the future,” commented Warrior's navigator, Will Oxley. “A fast time for this race could be as little as 50 hours, given the right conditions. We will have to see how the Antigua Bermuda Race evolves. It is a route that is popular for yachts returning to America and Europe from the Caribbean and it is also a race which should have more comfortable conditions than other offshore races I could mention. I can definitely see full-on offshore racing yachts trying to better the record, but it is also a great race for sailors that want great locations for the start and finish and to race offshore in spectacular conditions.”

The crew were celebrating with Gosling's Dark 'n Stormies at the Royal Bermuda Yacht Club, but will have to wait for other yachts to finish to decide who will be the victors after IRC and CSA time correction.
Allegra, the Nigel Irens-designed 78ft catamaran is due to be the next yacht to finish and is expected to cross the finish line at St. David's Light at about 2100 ADT tonight, Tuesday 16th May, setting the Multihull Race Record for the Antigua Bermuda Race.
Whilst light conditions early on in the race suited some of the smaller yachts, Warrior finished the race in good breeze, but that is fading as a windless hole is opening behind them. Warrior is one of the favourites for the overall win under IRC. Don Macpherson's American Swan 90, Freya was going well, but has now run out of breeze about 150 miles from the finish and hopes of winning under IRC are fading. Simon and Nancy De Pietro's CNB 76, Lilla is having a great race, but with 250 miles to go. Tim Wilson's Australian 1978 classic ketch, El Oro and Jeremi Jablonski's American Hanse 43, Avanti are going well and have over 350 miles to the finish.
Last, but by no means least is the Oyster 485, Gaia, owned by Andrew and Sabrina Eddy. The yacht is 411 miles from Bermuda and whilst the team may use their engine under CSA rules, the team has stoically stuck to sail power only. Andrew Eddy contacted the media team with a very amusing blog:
“All is well on Gaia and we are enjoying these blue waters and skies. Fishing activities have produced great expectations of tuna tartare & mahi mahi medallions, however so far our strikes have only produced enough for seaweed salad. The galley output has meant that we are enjoying three tremendous meals a day, prepared by the youngest crew member in the entire race, 19-year old Phoebe Cochran. Last night's Pork Bombay in a mustard jus with potato dauphinoise, washed down with a glass of Oyster Bay Chardonnay and a grape sorbet to follow, was a crew favourite!”
Warrior crew for the Antigua Bermuda Race: Stephen Murray, Jr, Ben Bardwell, Jackson Benvenutti, Dann Cahoon, Jesse Fielding, Karl Funk, Christopher Lewis, Ben Lynch, Jan Majer, Will Oxley, Tony Pearce, Ralf Steitz and Chris Welch.