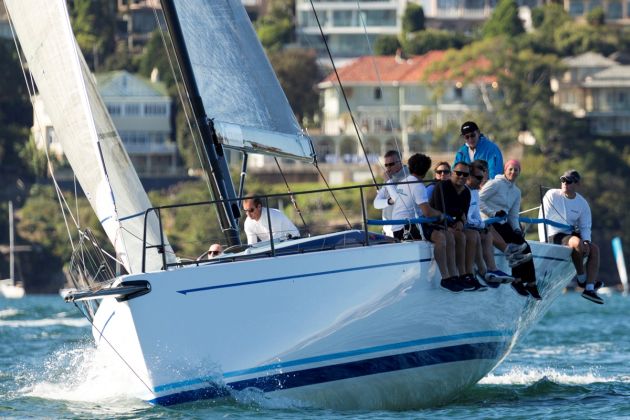 After another tricky day on Sydney Harbour for Race 3 of CYCA’s Winter Series, Tony Kirby showed just how fast his Ker 46 Patrice is, taking the win for the second week in a row. Kirby now leads Division A1 overall and proved with his regular crew on board, that consistency is the key in the increasingly light wind.

Sunday’s swirling south easterlies created challenging conditions for all competitors with tight racing in each division.

“It was a pretty fluky race, we caught everyone at the top, but then all of the big boats caught us as well. We just never stopped and worked to keep the boat moving the whole time, so managed to get out of there pretty well,” said Tony Kirby following Race 3.

He added, “The shortened course this week made for a slightly simpler race than last week, although Sailors with disAbilities Woteva, kept us honest. They got passed us at the last mark because they had a better angle coming out, but we were quicker upwind so caught back up to regain the lead.

“After being the fastest boat around the track this week, I can only imagine the damage it will do to our handicap for next week,” Kirby laughed. As it was Mother’s Day, the choice of who was taking home the prize was simple, Tony’s wife had been eyeing off the Winter Series jumper since they won it last week.

Phil Herscovics’ Sydney 38 Shine On finished third over the line, but claimed victory in the overall standings in the One Design class. Tactics and composure were in play, and his crew were the best at it on the day.

“Our good decision making is what gave us the win, and tactician Steve Taylor did an awesome job of telling me where to go,” commented Phil. “From my perspective, it was a great race and I’ve got to give big kudos to the crew.”

“After a good start, we struggled a bit at the top mark,” explained Steve Taylor. “We thought we could carry a kite with the others, but we lost about 300m trying to do so. Then, about half way up the course, the wind shifted again and we saw that it was going to be upwind to the mark so we kept our height and made up some ground to be sitting in third.”

As the volatile wind created problems for the boats ahead of them, Shine On made another great choice to keep sailing their higher course, meaning more tacks for their competitors as they continued to play catch up.

“It was the final beat up to Neutral Bay where the crew managed the change in the wind really well to keep us in third. We only beat The Goat by about half a length!”

Herscovics continued, “We really can’t thank the Sydney 38 division enough for ensuring the competition of the class. Special thanks to Next, Calibre and Wld1 for their sportsmanship and continuation of the One Design class.”

The Winter Series continues next Sunday, starting from 11:25am on Sydney Harbour.